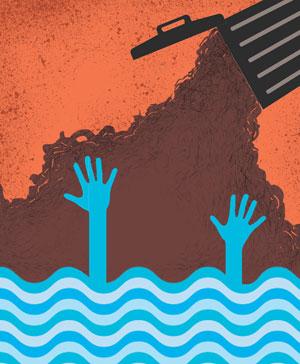 IN AN unusual judgment last month, a two-judge bench of the Uttarakhand High Court hearing a petition against the apathy of two state governments, Uttarakhand and Uttar Pradesh, in cleaning up the river Ganga ruled that the river and its tributaries be conferred the status of a legal person/living entity and their rights enforced by appointed guardians.

The judges invoked the deep astha (faith) that millions of Hindus have for the Ganga to buttress their jurisprudence. While they do mention that the river also sustains life and livelihood of millions of Indians, not just Hindus (curiously enough, the petitioner in this case is a Muslim), the judges seem more persuaded by the river’s sacred persona.

Despite its amateurish articulation, the verdict is one more endorsement of the radical idea that we must grant rights to nature in order to protect it from our hubris. In 2008, Ecuador became the first country in the world to endow rights on nature and gave citizens the power to sue on its behalf. Bolivia followed suit the following year with the Law of Mother Earth. And in 2010, New Zealand pronounced Whanganui, a river sacred to the Maori, to be a legal person.

Christopher Stone, an American professor of law, put this idea on a sound intellectual footing in his widely cited 1972 essay Should Trees Have Standing?, in which he argues that our anthropocentric ethics have given rise to an unconscionable caste system in which nature exists for the sole benefit and pleasure of humans. He posits that lest we degrade our environment irretrievably, we must seriously think of giving “legal rights to forests, oceans, rivers and other so-called natural objects in the environment—indeed to the natural environment as a whole”.

Critics of Stone’s thesis argue that there is no sound philosophical basis for granting legal rights to all of nature. In their view, only creatures with a sense of the self and the moral, that is, mostly humans and some large mammals like apes, elephants and dolphins can stake moral claims. As for creatures that “demonstrably” feel pain but lack self-consciousness, for example rodents, they could be eaten or experimented upon provided they don’t suffer “unjustly”. Needless to say, these definitions, are human constructs and eminently controversial.

Treating nature as a legal person also opens a Pandora’s box of practical difficulties. For instance, the judgement doesn’t spell out the rights of a river, thus raising more questions than it seeks to answer. Is erecting a dam on it ok? Can its basin be linked to that of another as the interlinking of rivers project proposes to do? Does the judgement render all industries and municipalities dumping their waste into it culpable? Can we trust the court-appointed keepers of the river?

Be that as it may, critics do concede that our political and economic systems have failed to protect nature. However, they believe that there is enough leeway within our existing legal framework—for instance the precautionary principle, and putting the burden of proof on the project proponent, to name just a couple—to create an effective bulwark around our beleaguered environment without necessarily tying ourselves in philosophical knots over nature’s legal personality.

All said and done, whether you want to preserve nature by endowing it with human rights or by taking away certain rights from the human, you still need political will to construct a new code of ethics. Unfortunately, in the current epoch of the Anthropocene, politics appears even more fragile and fractured. So, even as you cheer Ganga’s human identity, you might pause and ponder why the judges privileged the Ganga only? Couldn’t they have extended the same honour to all Indian rivers and forests? Sure, it would have sounded equally quixotic, but it would have at least appeared just and egalitarian. In the face of Prime Minister Narendra Modi’s unrelenting campaign to undermine and trivialise environmental laws at the altar of development, calling the Ganga human will not wash away our mounting environmental sins.