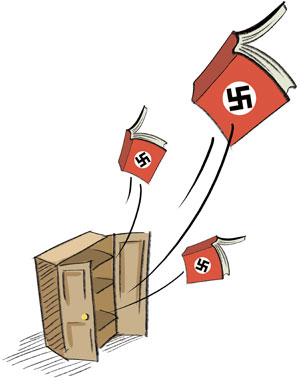 Mein kampf is a title that is often seen at railways stations in India, more so when the Bharatiya Janata Party (BJP) is in power. That’s playing to market demand because the author of this autobiographical work is Adolf Hitler, an acknowledged icon of the Rashtriya Swayamsevak Sangh, the BJP’s ideological parent. Mein Kampf, which translates to My Struggle, is also on offer on city footpaths where old books or pirated versions are hawked. On the Net, one can order a copy for as little as Rs 162 since a Delhi publisher is offering a15 per cent rebate. All these are, of course, concise English translations of the original German.

All the same, I was surprised by the buzz in January over the publication of Mein Kampf in Germany. The world was excited and alarmed. There was a flood of reports about its publication, some of which dwelt on concerns about the possible consequences of Hitler’s notorious manifesto reappearing in the country. The two-volume autobiographical work was written in jail by Hitler after his failed 1923 Beer Hall Putsch. The first volume was published in 1925 and the second a year later and it contains the toxic ultranationalist, anti-Semitic and anti-communist ideology of his National Socialist German Workers’ Party, or Nazi Party that culminated in the Holocaust and World War II.

Under European copyright law, the rights of an author of a literary or artistic work run for 70 years after his death. Hitler shot himself in his bunker in Berlin on April 30, 1945, after Nazi Germany was defeated by the Allied forces, and they handed the copyright to the state of Bavaria where it was originally published. But it appears Mein Kampf disappeared from public view because of copyright issues although during WWII more than 12 million copies were distributed as propaganda pamphlets, blanketing Germany till the end of the war.

Compared to the poorly produced and scruffy version of the Hitler book that is usually available in India, based presumably on the English translation by James Murphy, a one-time Nazi sympathiser who was hired by the Nazi regime to translate it, the new German edition—it is officially titled Hitler, Mein Kampf: A Critical Edition of Mein Kampf —is an imposing work. Extensively annotated, it runs into 2,000 pages and weighs close to five kg. Priced at 59, the first print run of 4,000 copies was snapped in no time while there are advance orders for another 11,000 yet to be met by the Munich-based Institute for Contemporary History which worked for several years on the book before launching it within a week of the copyright expiring at the end of 2015.

This is providing rich pickings for those dabbling in the secondary market. Copies are being offered at over five times the marked price on Amazon.com! Quite often those who make the laws on copyright don’t seem to understand that expanding intellectual property rights on literary and artistic works is counter-productive and does little to protect dead authors. Books only become costlier as they are prevented from coming into the public domain.

In India, the copyright runs for 60 years after the death of the author and the case of Rabindranath Tagore’s works illustrates how policymakers tend to view IPRs. When the copyright amendment policy was being amended in 1991, extending the term of protection by another 10 years from the existing 50, most of our parliamentarians spoke on the need for ªprotectingº Tagore’s works which were about to enter the public domain then. So there were fewer editions of the great man’s works in the market. When the copyright finally lapsed in 2011, there was a resurgence of interest in Tagore as more publishers brought out cheaper but well-produced editions of the litterateur’s works. The dead and the living gain from less copyright.