Tamil Nadu has to develop a policy framework to achieve employability through quality secondary education for women, shifting focus from only enrolment of girls in primary education

Tamil Nadu continues to be one of the fastest-growing states in India, despite some major declines due to political instability, rampant corruption, and populist measures at the cost of development. Tamil Nadu leads the rest of India in effective social engineering, largely attributable to the Dravidian Movement, which focused more on socio-economic development.

With no obligation to conform to national parties at the Centre, Tamil Nadu has shaped a path of development by shielding interference from New Delhi. Despite the portrayal of success in education and economic growth, the state has done little in reducing gender wage gap, especially in rural areas.

According to a 2017 World Bank report, the state’s female labour force participation is around 40 per cent and women contribute slightly more than men in casual wage jobs. Tamil Nadu’s literacy gap stands at 13 per cent as opposed to 16 per cent of the national average, reiterating the success of various schemes that have increased the gross enrolment of girls in schools.

However, as the literacy gap has narrowed, a visible gender wage gap in the rural casual labour sector has been observed. The fundamental model of development endorses equity extended to the labour market; but a wide gender wage gap illustrates the absence of skills among women or a gender bias leading to insufficient skill development for women.

Gender wage gap might be one of the outcomes of social discrimination but it could also be a symptom of erroneously-designed policies for the labour market.

Per day wage difference between men and women is 31 per cent as on 2011-12 in Tamil Nadu, which is not much lower than the national average difference of 35 per cent. Casual women labourers in rural Tamil Nadu deserve attention as 62 per cent of women are employed in this sector — a much higher figure than men who make up only 51 per cent.

The southern states of India, often cited as model states for development, have missed the debate on gender inequality since they employ more than half the women in rural areas.

With an 80 per cent literacy rate, Tamil Nadu has performed well in achieving the social objective of close to universal education. But it is hard to conclude that a successful reduction in the literacy gap has translated to an optimal and equitable labour market.

In contrast, education is a key determinant of wage inequality. As education increases, women tend to withdraw from the labour force due to less availability of suitable jobs. There could be social reasons that could restrict women from working, like family and household chores which are not considered as economic activities.

Despite the reasons of education and social factors, the casual labour sector continues to attract a large number of women, primarily unskilled, despite low wages. 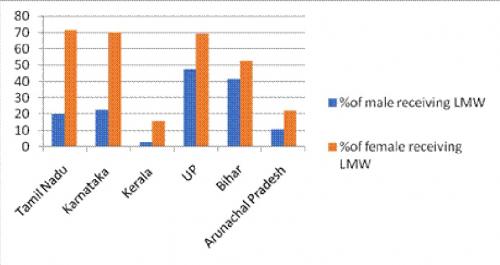 A direct comparison of wage differential would be misleading as the informal sector wages are highly determined by the performance and labour market of the concerned state. To present a more comprehensive picture of gender wage gap among three north and south Indian states, a simple calculation of percentage of male and female workers receiving ‘Less than Minimum Wage (LMW) of INR 122’ is presented in the graph above.

The data clearly reveals a paradox in states like Tamil Nadu and Karnataka, which exhibit higher wage differential in casual workforce (average of farm and non-farm). In Bihar and Uttar Pradesh, the number of persons receiving less than minimum wage set by the government is higher but that relates to weak labour market movement and poor state regulations.

It is crucial for a state to understand that enrolment in education is not a panacea for growing unemployment. Evidences support that unemployment increases with higher levels of education; in rural Tamil Nadu 126 individuals per 1,000 postgraduates are unemployed and almost every non-literate is engaged in the labour market.

Educated unemployment is a widespread problem in India; the state has to rekindle the labour market demand by incentivising business within the framework. Enrolment of girls in education alone will not guarantee growth in workforce participation, it is a priority but there is incongruity between labour skills possessed and skills demand in market.

Despite higher literacy rate if the free market discriminates wages based on gender, it points to a facile design of labour market which is likely to adversely impact the state’s economy. Reduction in gender literacy gap has to penetrate down the informal economic sphere by paying equal wages to men and women with better state regulation.

A mere increase in the number of enrolment would hold little relevance if gender discrimination exists in economic activity and is made worse with weak social security mechanism. The much adulation received by Tamil Nadu for improving social indicators needs to be analytically viewed.

In actuality, the state needs to focus on skill augmentation among women and provide employability without discrimination through economic channels.

Skill development as a tool to combat wage inequality

Traditionally, as women are positioned in the lower strata of the social pyramid, labour market wages need to evolve a model highly dependent on performance and not on gender.

A large gender wage gap in Tamil Nadu, despite presumably good socio-economic indicators and no explicit evidence of men having productive superiority over women, points to two elements. Firstly, women being paid less for the same job even as the law mandates equal pay highlight the discrimination that potentially can discourage women from entering the labour market in the future.

Secondly, the inability of the state to provide necessary skills to women creates an asymmetry in competence, leading to their withdrawal from the labour market. Where increase in employment figures do not manifest into inclusive development, it needs deeper analysis to recognise the causal factors of skill deficiencies.

The informal sector provides cheap labour for the industries but results in a general downtrend in wages and that is a concern as the majority of population is engaged in this sector. Further, gender wage gap is a sign of weak condition of informal labour market and poor efforts of the government to enhance skill levels in India.

The objective of laying down a minimum wage is to ensure a basic standard of living; huge difference in providing minimum wage based on gender proves underlying patriarchy covertly allowed by the state. The case of development has to be holistically viewed; the various programmes of a state have to address fundamental social problems through policy intervention.

The image of the state as one with the best socio-economic indicators tends to camouflage the fundamental reality of gender discrimination on a significant scale. The state needs to address this issue urgently to ensure a fair and equitable society.

Tamil Nadu’s vocational education is primarily imparted by private institutions and women tend to be less in number for such training. Incremental human resource requirement for Tamil Nadu is estimated to be 135 lakhs by 2022, the third-highest in India followed by Maharashtra and Sikkim.

The state government needs to proactively enhance the skill development programmes for women to meet growing demand of the industrial sector and to address the skill gap. High levels of skills would also ensure better bargaining power for women; social discrimination would soon be eliminated if economics is influenced by the state.

It is impossible to dismiss the labour productivity argument for a differential wage but wage rates determined purely by the labour market with no formal yardsticks to measure productivity can be attested to market failure.

The routine exploitation of female labourers in rural areas has to be recognised as a major social problem. Skill development programmes and vocational training based on available jobs have to be integrated with secondary education.

Different states of India are characterised by various socio-economic layers of issues that need customised, systematic policy interventions. Tamil Nadu has to develop a policy framework to achieve employability through quality secondary education for women shifting focus from only enrolment of girls in primary education.

Manjari Balu is a Research Analyst at The Peninsula Foundation, Chennai