The young, old and an unequal world

Younger, meaner, more self-indulgent, angry and insecure in a climate risked world. We don’t deserve this 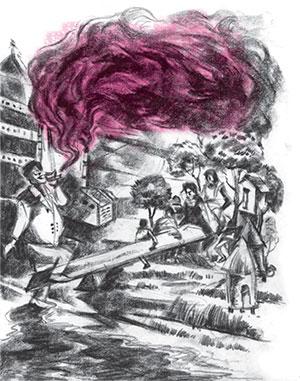 In January 1993, Down To Earth published the original “World on a Boil”. Its then editor, Anil Agarwal, wrote forcefully that in 1992, the world had moved several steps towards globalisation, but without giving attention to the sharp economic, social and cultural divides. He wrote—in what seems so prophetic today—that this tumultuous year, which saw the launch of (unfair) world trade rules and climate agreements, would set the agenda for globalisation in an intensely unequal world.

It is May 2018—a quarter of a century later—and it seems that the world has not just imploded, but it has also come apart, unraveled. Sins of deliberate omission have come home to roost. Our time is a time of deep crisis.

Today, the rules of global trade—which were made by the then rich to get richer at the cost of the poor people and their environment—are not working for the so-called rich as well. In the past 25 years, globalisation has indeed linked markets, opened up trade and made some in the world much more affluent. This globalisation of markets was combined with another major development in the past 25 years —the unexpected but marvelous growth of the Internet. This connected people, but more importantly, it has brought the marketplace into our space. Connected cyberspace. Connected consumers.

So, on one hand, globalisation changed the very nature of production—it moved away from countries where labour, environment and material costs were high to where these costs could be discounted or just ignored. Labour did not move. Production did. There is no doubt that this has left large numbers of the formerly employed and formerly affluent feeling betrayed by the new economy. After Brexit, the world is now moving towards a full-blown trade war.

On the other hand, the Internet has changed commerce so much so that goods can be sold over cyberspace. The combination of the two developments is that business has shifted out of the small mom-pop brick and mortar business. It has been replaced by an Internet-driven business, a corporatised mean and mercenary machine, which has now been found to indulge in everything—from tax evasion to privacy thefts. The new business is the old business.

We have all been willing participants in this makeover. It just seemed so benign. We thrived on the growth of the social media. We became creatures of this new game in town—we vented our anguish and then vented our hate on this new platform. We crossed the line between public civility and brutality, and into bestiality so quickly that it should worry us. Indeed shame us.

But we believed we were changing the world—this tool was empowering us to be part of networks and build pressure on governments to act. It was the pinnacle of democracy. The first big win was when regimes—which were labelled as dictatorial and cruel—were brought down by citizens’ pressure. From Arab Spring to citizen journalism, we feverishly believed in this new world of social media activism. We thought we were in control. We were leading the charge.

How wrong we were. How naïve. How technology seduced. The fact is today it is because of social media that democracy is in danger—the recent Facebook scandal is the tip of the iceberg. Forget petty personal privacy concerns. The real game is the takeover of our freedom to elect our leaders. It is not incidental. It is certainly not accidental. It is part of the package, when we have decided that we will accept the world that is built on our convenience to share, vent, shop and consume. This sharing world is not a caring world. It cannot be.

The root is that we did not fix what was broken. We just moved on. It should not surprise us, or shock us, when Oxfam calculates that the richest 1 per cent of the world and, in fact, the richest eight persons in the world now own more wealth than the poorest half of the world population combined. In 1992, it was an intensely divided and unequal world. In 2018, it is even more divided and so even more angry —and remember it is younger and so, more anxious for opportunities.

Climate change is not making things easier. Across the world, there are signs of an impending catastrophe. The poor, particularly farmers, are already hit. They have little defense mechanisms to provide support and succour. They are also angry. They have every right to be.

But this is not about the poor. The deluge is coming. We will all be hit. The legacy is the problem. Not just in terms of the carbon dioxide, which is already in the atmosphere. No, the real legacy is the fact that our world agreed to an agreement on climate change that was not equitable—this meant that there was no real cooperation and the poor did not reduce their emissions, because the rich were intransigent. Today, we have no real answers to wean us away from the fossil economy. If the world had accepted the need to share atmospheric space, it would have shared and it would have reinvented growth.

The question is what do we do? We cannot turn back the clock. But we can wind it differently. This means going back to the drawing board to write up the principles—the societal values that must drive countries, businesses and people. It means getting back the politics of morality and justice. It means rewriting the Constitution of the world and of each country, from where the rules of governance and transaction can then be derived. I know this sounds idealistic and definitely out of sync in this world of suits and technology fixers. But the next 25 years cannot be more of the same. This is not an option.