Yes, I buried my mother in front of my house

About 165 kilometres east of Lucknow, the capital of Uttar Pradesh, lies Pratapgarh district. Here, a cluster of villages are home to the Chamarmangtas, one of the state's most marginalised communities.

We were told that the community folk bury the dead bodies of their family members in front of their huts or houses (some of them allocated under the Pradhan Mantri Awas Yojana) as they are not allowed to bury them on the village community land by the gram sabhas. The sabhas do so as they  believe the community is made up of Ghumantoos (nomads) and hence are not entitled to any piece of  land.

On November 10, 2019, after travelling for nearly four hours, we reached Karamganj, the first Chamarmangta village. The people looked human, but from a different planet.

As you enter the village, a grave covered with some bricks and a shroud in front of a small hut greets you. Before I could allow my imagination to run riot, a man in his mid-sixties appeared before us.

His name is Nagade Prasad. His younger brother was a bachelor, who used to live in the hut. Two months ago, he died after a brief illness. Nagade buried his body in front of his hut, which now remains locked most of the time.

I was told that the entire community has no option but to bury the dead outside their houses as there is no land available for them. The community live on the periphery of the village and are in perennial conflict with the others.

They are considered 'untouchable' by the other castes. When I asked them about their religion and origin, most looked speechless. Atul Tiwary, a local social activist told us that they are Hindus but bury the dead. Atul is working with the gram sabha and the government agencies to help them get access to government schemes.

Before I could come to my senses, 37-year-old Chetu insisted that we visit his house too, where he buried his mother a few years ago. He literally dragged us to a small grave painted white. Chetu willingly posed in front of the grave of his mother.

Karamaganj has 70 households. The people do not have any means of livelihood and beg for a living. Widows and children are mostly engaged in begging.

Some go to the cities and eke out a living by cleaning wax from the ears of others. The community has no knowledge about their origin but Tiwary said that initially, four or five families came from places like Allahabad, Fatehpur and Rewa, and settled here decades ago. 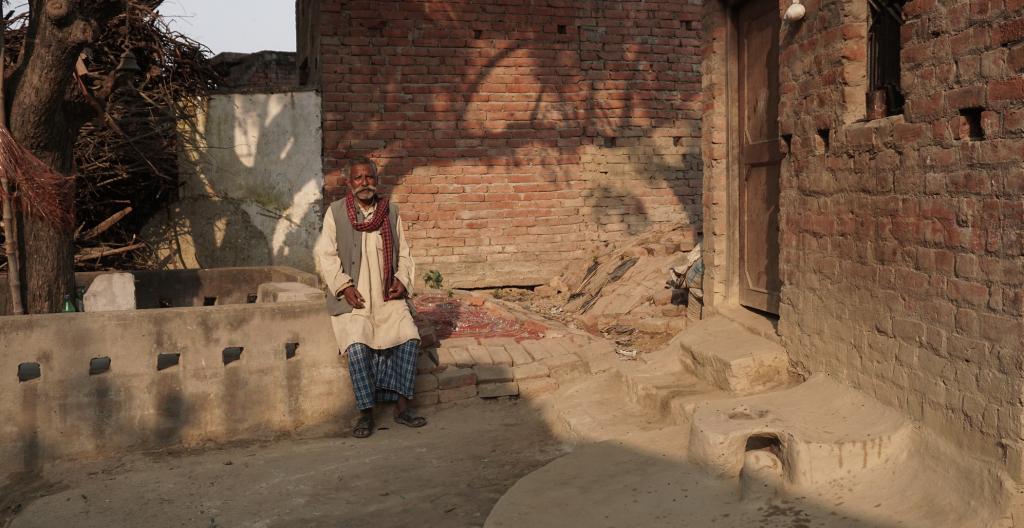 The only identity they carry is their voting cards, which is quite obvious. One can also see that some some houses have been constructed under the PM Aawas Yojna. A few also claim to have got LPG gas cylinders under the Ujjwala Yojna. When asked, Nagade said he had not received his old-age pension.

Our next destination was the village of Antamau, with 30 households. The village is no different from Karamganj.

Here too, the socio-economic conditions are the same. Seventy-five year-old Gandhian Ram Badan Shukla, who is working on child education in these villages said the Chamarmangta were a landless community and the only way to bring them out of this vicious circle was to educate the younger generation.

He admits that there are lot of versions about their origin. According to one version, Chamarmangats used to teach wrestling to the rajas and maharajas around 200 years ago. But after the abolition of the princely states, they started living a nomadic life, wandering in search of livelihoods and began to beg for survival. Shukla said festivals were major occasions when the community earned enough though begging. Some beg on the ghats of the Ganga.

By the time I left Antamau, I was convinced that places of birth and death will continue to interest us more than anything else.

Surendra Panwar is a senior journalist with a career spanning over 20 years. He currently works as a freelance writer with a focus on tribal and social exclusion issues