The university recently declared a war on black carbon through a decision to ban fuel-burning vehicles in the campus. The decision has gone down well with most university staff and students. But some have started citing ridiculous reasons for removing the ban 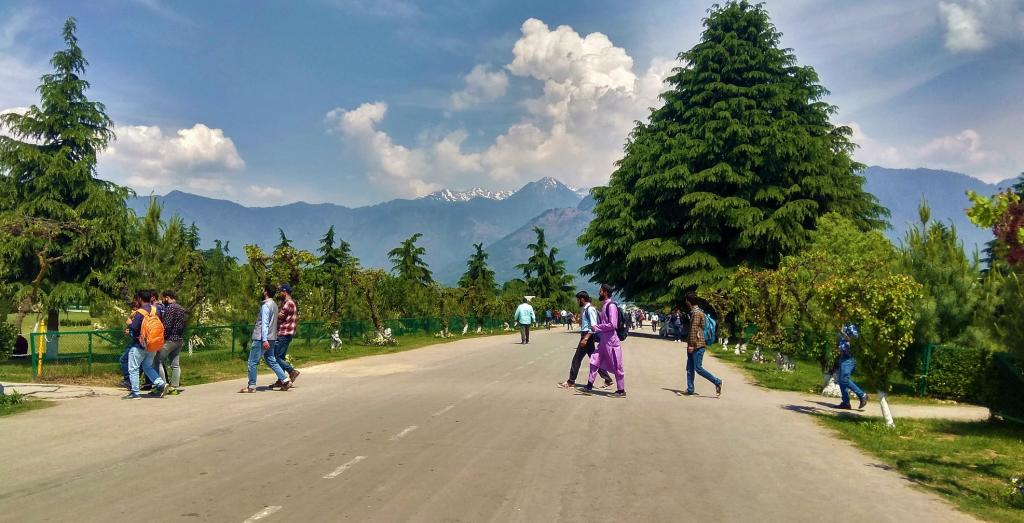 Late on Wednesday evening, a friend from Kashmir University (KU) sent me some photos which he had taken near the university’s iconic Iqbal Library. He wanted to show me how serene the KU campus looks these days without cars honking and whizzing around — and parked on roadsides in the campus following a recent decision by the KU administration to keep the campus free of diesel and petrol-propelled vehicles.

The photos looked soothing to the eyes and depicted an atmosphere of picture-perfect peace and tranquility, with students and academics walking in little groups of three, four or more in the campus. After all, when it comes to natural beauty and the charms of a university campus, KU can arguably take the crown, at least in South Asia.

But oddly enough, some elements in the university have started building pressure on the administration to remove this ban aimed at making the campus more healthier ecologically. Insiders in the university said that many of these people are academics. Communication among the university staff members, which this writer gained access to, partly makes for a pathetic reading, with some members citing ridiculous reasons for removing the ban.

For example, one staff member has raised questions about health emergencies, inter-departmental visits and offering prayers at the iconic Hazratbal shrine. All of these reasons do not hold water, considering the fact that the university already has some electric cars and plans to buy more electric cars and e-rickshaws as part of its green mission even as the entire campus is just 1.06 square kilometres in area, with a pretty good tree cover epitomised by comforting and restful gardens like Naseem Bagh and avenues lined with evergreen trees. The Hazratbal shrine is just outside the main gate of the university.

Another member has cited harsh winters wherein “a couple of feet of snow can make walking very difficult in the campus and can also make you sick.” Yet another has suggested that the ban should be restricted to “young people” and “students” only. But most of the members seem to be in favour of the decision and have expressed their views on social media as well.

For example, Altaf Pandit, a professor at the Department of Chemistry wrote in support of a a Facebook post, which one of his colleagues had shared: “KUTA (Kashmir University Teachers Association) had an opinion poll in which a good number of teachers participated [and] some did not. Among those who participated, the majority want the restriction [on vehicles]. A small minority [is] against this restriction. That is why KUTA went ahead with this demand and thankfully, [the] administration implemented it.”

The ban was initially implemented for five days and was continued later as demanded by KUTA. The association, as mentioned in the communication among KUTA members cited above, is in touch with the administration for making some more alternative arrangements in view of the continuation of the ban.

Shakil Romshoo, who heads the Earth Sciences Department and is a strong proponent of the ban, wrote in response to the same post: “The movement and number of vehicles had increased a lot within the campus; and in absence of the regulation, it was going to get worse in future. All of us are enjoying the serene ambience of the campus since the ban was implemented. We need to be patient and support the initiative keeping in view the tremendous benefits of a vehicle-free campus.” He also cited the parking mess in front of each of the departments in support of his argument.

Why KU needs to set an example

In Kashmir, the government is struggling to cope with the proliferation of vehicles, for which lack of viable public transport is partly responsible. But in recent years, a growing middle class has resulted in more vehicles on the roads. There are some households in Kashmir wherein each family member owns a car.

Due to these reasons, the number of vehicles has sharply increased. Bumper-to-bumper traffic on Srinagar’s roads are a common sight, especially in summers.

The number of vehicles on the roads has doubled from over 7 lakh in 2010 to over 14 lakh (14, 881,90) in March 2017, as per the J&K Transport Commissioner’s office, foregrounding the need for better public transport.

Widening of roads for accommodating additional vehicles and addressing traffic jams is the most common solution, which seems obvious to many people and policy-makers. But there is a fundamental problem with this idea as it involves more concretisation of land at the cost of the green area. Plus, many experts have argued that the widening of roads never addresses the problem as it encourages people to drive more miles and thus bring more cars on the roads.

KU’s decision of banning vehicles inside the campus can set an example about why people should not become dependent on personal cars. The government can also take a leaf from KU’s decision and can improve public transport besides buying more electric buses in addition of the four buses it has got last month.

Romshoo told this writer that vehicular traffic and biomass burning (burning of leaves and twigs for making charcoal) is also the main source of black carbon, which, he said, causes rapid melting of glaciers. “Average Black Carbon at Srinagar is the highest among all the observed high-altitude Himalayan sites,” he said while quoting from the study.

Also, two years ago, the state government placed a ban on the burning of leaves iby ssuing circulars to various departments for its strict implementation.

“With the onset of autumn, thick plumes of smoke rise up in different parts of the valley because of the open burning of abscised leaves, willow and poplar twigs releasing large amounts of air-borne particles (PM 2.5 and PM 10 which are particulate matter less than 2.5 microns and 10 microns) which include fine bits of dust, soot, harmful particles and toxic gases aggravating air pollution,” read the government order issued from the chief minister’s office.

But this ban is affecting only the poor people who rely on burning of leaves and twigs for their livelihood. Why shouldn’t the middle class share the responsibility? KU has done well to bring the middle class under the polluters’ bracket!