Children’s right to nutrition: how we can do better

While there has been an improvement in the overall health of children, the annual rate of progression is disappointingly slow 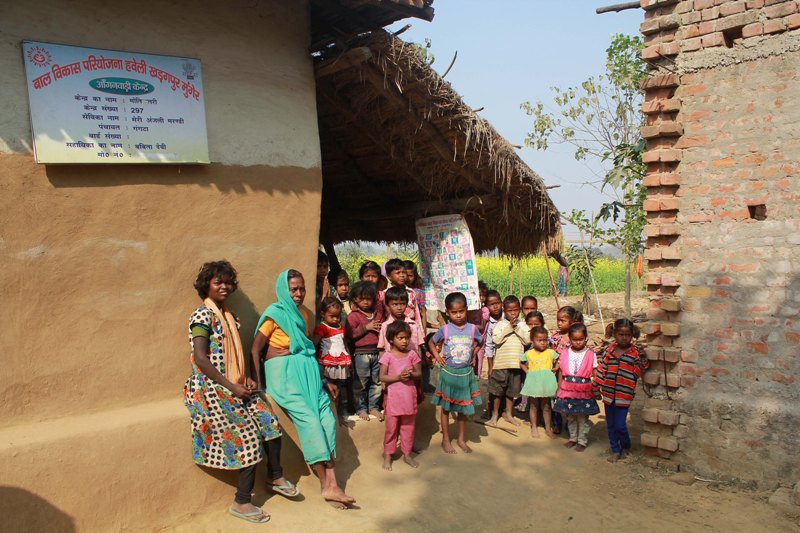 These two lines were coming in refrain as a bunch of young children chanted their morning rhyme under the supervision of a middle-aged lady. Khichri, the main item on their lunch menu, was simmering away at some distance. This small rented house, with a sunken roof and small windows, has been home to the Integrated Child Development Services (ICDS) centre for the past few years. The centre is near the tribal village of Motitarhi, a remote hamlet in a remote corner of Haveli Kharagpur, in a backward block along the river Ganga in Munger district of Bihar. This area, along with neighbouring villages of Dudhpaniya and Kenduatarhi, has made it to the headlines several times in the recent past for extremist political activities.

Motitarhi is one among the 630,000 Indian villages which have no doubt seen significant improvement in household incomes, agricultural productivity and child survival. Between 1990 and 2014, as the income of the average Indian rose by an annual average rate of 4.7 per cent, crop yields of all food grains rose by 2.3 per cent and 2.5 per cent fewer children died in the first five years of their life. And despite these figures, India still remains home to over 40 million stunted children and 17 million wasted children under five years.

A recent study by Public Health Foundation of India shows that child under-nutrition rates have also been declining, first at a slow rate between 1992 and 2006, and then at an accelerated pace in the last eight years. However, these improvements are still lagging behind the rate required to meet the global goal which India is a signatory to. Between 2006 and 2014 in India, the stunting rate for children below five years declined from 48 per cent to 39 per cent. This decline in prevalence of stunting has resulted in 14 million fewer stunted children, and the decline in wasting has translated into more than 7 million fewer wasted children. This in turn is reflected in a 23-per cent reduction in the number of stunted children and a 35-per cent reduction in the number of underweight children. Despite this progress, child under-nutrition rates in India are among the highest in the world, with nearly half of all children under three years of age being either underweight or stunted.

Recent National Family Health Survey (NFHS) data also reveals that nine of 11 states have not been able to reduce the infant mortality rate even by 2 percentage points annually. As per CRY’s analysis of critical child health indicators of NFHS-4, the only two states that have been able to sustain a two-point annual reduction in the infant mortality rate are West Bengal and Tripura. Currently, 40 out of 1,000 infants don’t get to celebrate their first birthday.

This much-awaited survey on India’s health indicators was released by the health ministry after almost a decade. While the report shows an improvement in the overall health of children, the annual rate of progression is disappointingly slow.

India represents one of the largest numbers of malnourished children in the world and performs dismally on all child nutrition indicators. Under-nutrition in infants and young children leads to growth failure, lowered resistance to infections, increased rates of morbidity, increased risk to survival, impaired growth and poor school performance. Thus, a lack of proper nutrition during childhood has tangible long-term impacts on the mental and physical development of individuals.

Recognising the crucial importance of a holistic emphasis on the age group 0-6, the Integrated Child Development Services (ICDS) Scheme, a centrally sponsored national flagship scheme of the Government of India, aims at addressing health, nutrition and the development needs of young children (0-6 years), expecting women and nursing mothers.

However, despite government efforts and schemes, the nutrition figures in the country are cause for grave concern. Under the ICDS Scheme, anganwadi centres provide requisite nutrition, health services and care to children and mothers. According to the Ministry of Women and Child Development, in 2012-13, more than 1.3 million anganwadi centres were sanctioned, but 34,617 were still not operational. Additionally, 33 per cent of the children in the country were out of anganwadis’ reach.

This trend is more prominent in remote areas like Motitarhi where children bear the brunt of deprivation. Today, children of Motitarhi are in a much better situation as all of them are covered by ICDS. But a few years ago, the situation was not so promising. The village had an anganwadi which was neither accessible nor operational, and children used to suffer from a visible lack of nutrition. It was only when a local NGO called Disha Vihar, a partner organisation of CRY – Child Rights and You, started working in Motitarhi and neighbouring villages that the overall scenario started changing for the better.

Umesh Manjhi and Moti Manjhi, two residents of Motitarhi, recall how Disha Vihar’s intervention rejuvenated the old ICDS Centre and got children of the village linked to it. “Now all our children go to the anganwadi centre every day. Anjali behen, the anganwadi worker, washes their hands properly before they have lunch and makes sure they eat well,” says a beaming Moti Manjhi.

“I try my best,” says Merry Anjali Marandi with a half-smile, pointing at the children. “But there are loads of challenges. We always run short of funds, as the inflow of money is very irregular. Moreover, as we don’t have a building of our own, we have to pay Rs 500 per month as rent for this shack. We don’t have electricity either.”

There are also children who are not as fortunate as the ones of Motitarhi. Such children and their parents haven’t even heard of the ICDS Scheme. To reach out to them in an effective way, what we need is a well-defined system for management of malnutrition coupled with political will, which would involve the convergence of all stakeholders—not only anganwadis but also health care centres, hospitals and malnutrition treatment centres (MTCs). While ICDS is a well-designed programme and we have functional anganwadis in most places, bottlenecks in service delivery and community outreach pose a challenge in its proper implementation. The quality of services needs to be improved, with strict emphasis on growth monitoring of children and flagging off possible cases of malnutrition.

With improved service delivery of ICDS, preventive rather than reactive approach to tackle malnutrition and better community outreach, the nutrition status of children in the country will surely witness a significant change. Investing in our children in the age group of 0-6 years will translate into long-term positive returns and pave the way for a healthier and happier nation.