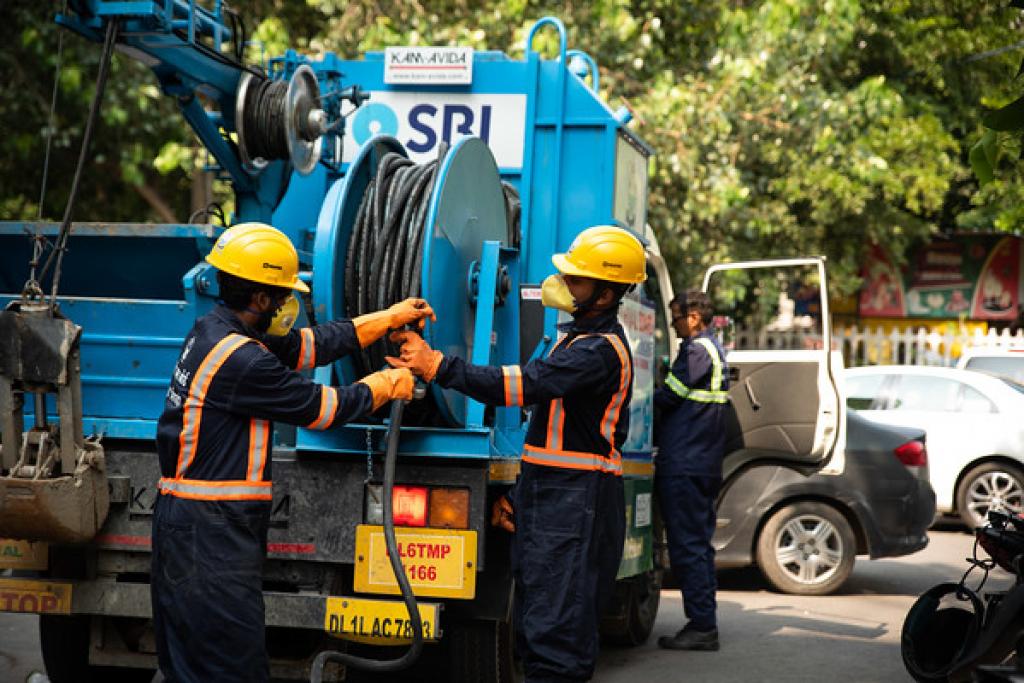 At least 40 sanitation workers tested positive for the novel coronavirus SARS-CoV-2 and 15 died due to the disease in national capital New Delhi, as of 23 June 2020.

According to the National Commission of Safai Karamcharis, 50 sanitation workers died cleaning sewer in the first six months of 2019 and many cases remain unreported. However, the novel coronavirus disease (COVID-19) pandemic has both exacerbated the existing issues and created new problems as well.

The central and state governments introduced measures regarding personal protective equipment (PPE), hand hygiene, etc, but they lack uniformity in terms of threshold of protection and follow a one-size-fits-all approach that does not take into account the specificities of sanitation workers.

Sanjeev, a waste-collector employed with the East Delhi Municipal Corporation (EDMC), wears a cloth mask provided by the civic body, which hangs by his ear as he collects waste. Sunita, employed with the EDMC and a resident of West Rohtash Nagar, talks about the struggle she and other sanitation workers have to go through to procure PPE.

The rubber gloves provided by the corporation to Sunita are now torn. She claimed she had to “yell at the top of her voice” to get the gloves and mask.

While the guidelines on rational use of PPE, issued by the Ministry of Health and Family Welfare (MoHFW), mandate that sanitation staff be provided with N-95 masks and gloves, the Central Pollution Control Board (CPCB) guidelines of 9 April, 2020, mandate that sanitation workers be provided with adequate PPE such as “three layer masks, splash proof aprons / gowns, heavy-duty gloves, gum boots and safety goggles”.

Even the World Health Organization interim guidance note recommends that sanitation workers be provided with “PPE that includes protective outerwear, heavy-duty gloves, boots, goggles or a face shield, and a mask.”

There is a lack of clarity in terms of the level of protection that sanitation workers must be provided with. The facts in the Delhi High Court case Harnam Singh v Union of India (June 2020) highlight the difference in the safety standards for sanitation workers followed by the different municipal corporations of Delhi.

The South Delhi Municipal Corporation (SDMC) claimed that sanitation workers were “only allotted street sweeping work”. It added that surgical masks, gloves, etc, were provided according to the work done and N-95 masks were reusable.

Shouldn’t these standards be uniform?

The CPCB guidelines prescribe responsibilities for those operating quarantine and home-care facilities, including segregation of bio-medical waste and general solid waste. Segregation of waste is at the heart of the safety framework for waste workers. But rules are being flouted across the city.

For instance, in Rohtash Nagar, where one of the co-authors resides, residents have been dumping waste in waste-collecting truck without any labeling or segregation. Several people were under quarantine in the area.

The lack of strict segregation of waste combined with poor access to PPE and other facilities have put waste workers at a grave risk. In a study conducted by the Institute of Social Studies Trust (ISST), with women waste pickers in Rangpur Phadi and Masoodpur on the impact of lockdown, many workers shared that the lack of PPE aggravated their anxiety.

Discussions around safety and health of sanitation workers, however, have not adequately taken into account this mental stress.

Virat, who works with the EDMC, said several waste workers have fallen sick. He talked about a young boy who had a severe headache and died on duty during the pandemic.

What would a treatment for COVID-19 for sanitation workers look like? What about hospital costs? What about health insurance coverage?

In a telephonic survey conducted by the Urban Management Centre (June 2020) with 95 sanitation workers across the country, it was found that only 14 per cent of workers interviewed had health insurance coverage. While schemes such as Pradhan Mantri Garib Kalyan Package exist, little is known of their implementation.

The Delhi government on 19 April, 2020 notified a relief scheme of Rs 1 crore to families of employees (including “sanitation staff”) “deployed for COVID-19 duties by the government of NCT of Delhi”, if they died by contracting the disease on duty.

Again, there is insufficient information on whether the relief has reached the families concerned. On one hand, sanitation workers are made to prove the cause of death to access relief schemes, and on the other, they are stigmatised on the presumption of being potential carriers.

For instance, some resident welfare associations in Delhi barred waste-pickers from entering their colonies. Their exposure to COVID-19 waste and, thereby, their potential susceptibility to the virus is both invisible and hyper-visible.

“We haven’t been getting our salaries on time for the last few months. But if we do not go to work, our salaries get cut,” said Sunita. She said she had been cautiously using the sanitizer provided, for the fear of being unable to procure a new one.

According to an article by Vandana Prasad and others, measures such as “stay-at-home” or “hand-washing” have to acquiesce the socio-economic determinants of the community — their ability to adhere to such public health advice.

The ISST study stated that many workers faced difficulty in following measures such as hand-washing and physical-distancing; many of them had inadequate access to clean water and soaps / sanitizers, and were unable to maintain physical distancing while standing in queues for food and ration.

Sanitation workers are often tied to their hazardous occupations that offer them little occupational mobility. This perpetuates a dichotomy between their livelihood and safety, which the pandemic has further aggravated, Prasad et al note.

Sanitation workers have not had the option of working from home. Workers like Sunita have had to be physically present at their workspaces even as the rest of the country adjusted to home work-stations and lock-down life. In such a scenario, a mandate like “stay-at-home” becomes unrealistic.

Virat hopes to get regularised since he has been working in the most severe phase of COVID-19 pandemic. As lockdowns continue across the country, and as the economy plummets, workers are faced with a trade-off between saving their lives and saving their livelihoods.

The question does not seem to end here though: The problem of lack of safety and protection of sanitation workers rests in a network of other questions — that concern the imagination of an equitable healthcare system that can sufficiently provide for them.

There is an urgent need to not only envisage safer working conditions for sanitation workers, but also mechanise and abolish the hazardous modes of manual cleaning that perennially subject sanitation workers to this trade-off.

All names have been changed on request

Barathi Nakkeeran is a lawyer. Sonam is a student activist and has presented her work on Sulabh Sanitation Workers at an International Conference by Azad Foundation.