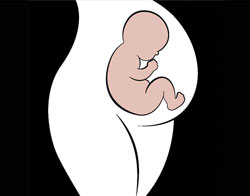 NOT SO long ago, newborns were ushered into the world naturally. Just as in their mammalian cousins, both the expectant mother and child were subject to the cold logic of natural selection— some survived, while others were not so lucky. Then, around the mid-19th century, science rigged the rules by delivering babies through a knifed abdomen.

The new surgical intervention (known as the caesarean section, or C-section for short) was meant expressly for pregnancies in which the life of the mother or child or both was in danger. There is little dispute that in such cases, C-section has been a life-saver. However, in low-risk pregnancies, it is, by most accounts, an unkind cut. Studies have shown that it renders the mother vulnerable to debilitating, if rare, complications, such as haemorrhage, blood clots, and bowel obstruction. Lesser risks like bladder damage, infection and nagging pain are not uncommon.

There are downsides for babies too. Compared to naturally-born children, they are more likely to suffer from asthma, allergies, autism and even obesity. In his recent book, Childbirth and the Future of Homo Sapiens, Michel Ordent, a maverick obstetrician based in London, suspects that these anomalies may have something to do with synthetic oxytocin, anaesthetics, and epidurals that accompany a C-section. Some researchers speculate that it might be because caesarean babies are deprived of the gift of immunityboosting microbes that a vaginal baby comes wrapped in. Besides, there is a belief, as yet untested, that natural birth makes for greater intimacy between mother and child.

This, one would imagine, would scare any expectant mother away from C-section. On the contrary, there has been a dramatic surge in its popularity around the world in recent decades. Currently, it ranges from 12 per cent in Sweden, 32 in the US, 41 in Iran, and a staggering 52 in Brazil, to cite a few. Most exceed the World Health Organization (who) recommended limit of 15 per cent.

India is still at modest nine per cent but in some states like Kerala and Tamil Nadu, it has assumed epidemic proportions— around 60 per cent.

There are several reasons for this upswing. For one, C-section costs twice of natural birth; hence private hospitals tend to do them more. Two, C-section has become the default option for most obstetricians, as they are not trained in alternatives like forceps delivery and ventouse. Three, many well-off women opt for it in order to avoid labour pain. Besides, as more women are having their first child in their 30s, they don’t want to take any chances.

Like many controversies surrounding modernity, the one on C-section too is couched as the “nature versus technology” argument. Pro-caesareans ridicule provaginal births as essentialists and, in turn, are accused of technological triumphalism.

The UK Supreme Court added a new knot to the imbroglio this March when it indicted a doctor for recommending natural birth to a woman (she lost her child) even though she deserved a C-section (she was short and diabetic). Denouncing it as “medical paternalism”, the court ruled that henceforth, all doctors in the UK will have to explain the pros and cons of both choices. Ideally, that might seem like the most rational thing to do—let the would-be-mother take the final decision after she has been informed of all the potential risks of either option. But in developing countries like India and Brazil where healthcare is an increasingly private (and shoddily regulated) business, and where illiteracy abounds, it would take far more to stem the tide.

A greater obstacle perhaps, is the prevalent culture of risk that makes people trust technology and professional expertise more than the skills of a midwife. Better regulation of nursing homes and well-informed birth specialists would surely help. But a sustained, enlightened public discourse on the science and politics of birthing might go a much longer way.