Children born in Goa (75.4 per cent) had the highest rate of early breastfeeding in the country, followed by Sikkim (69.7 per cent) and Odisha (68.9 per cent)

Socio-economic marginalisation in India is, generally, defined on the basis of social groups (Scheduled Caste, Scheduled Tribes, Other Backward Classes and general category) and also on the basis of religion (Hindu, Muslim, Sikh, Christian, etc).

It is a common notion that Scheduled Caste (SC), Scheduled Tribes (ST) and Muslims have been living in backwardness and have faced social-economic-political exclusion. They have shown lower level of indictors of good practices and development.

In terms of per capita income, education, livelihood security, health, these groups and sections are below the average standards. But the marginalised sections — SCs, STs, Other Backward Classes (OBCs) Muslims, etc — follow better practices in early initiation of breastfeeding, than the general and overall Hindu sections.

“Early initiation of breastfeeding is important for both the mother and the child. The first breastmilk contains colostrum, which is highly nutritious and has antibodies that protect new born from diseases,” according to the National Family Health Survey (NFHS-4).

It “also encourages bonding between mother and her newborn, facilitating the production of regular breastmilk. Thus, it is recommended that children be put to the breast immediately or within one hour after birth and that prelacteal feeding, anything other than breastmilk, be discouraged,” the NFHS-4 noted.

The World Health Organization also recommends early and uninterrupted skin-to-skin contact between mothers and infants. All mothers should be supported to initiate breastfeeding, within the first hour after delivery. Mothers should receive practical support to enable them to initiate and establish breastfeeding and manage common breastfeeding difficulties, according to the global health body.

It is to be remembered that countries have made a commitment under the United Nations-mandated Sustainable Development Goals to end preventable deaths of newborns and children under-five, by 2030.

While many efforts are needed to achieve this goal, one among them is ensuring early initiation of breastfeeding.

Lack of access to water, sanitation, proper nutrition and basic health services resulted in 802,000 infant deaths in India in 2017, according to the United Nations Inter-agency Group for Child Mortality Estimation.

Infant deaths in India remained the highest in the world, it added.

“Without urgent action, 56 million children under-five will die from now until 2030 — half of them newborns,” said Laurence Chandy Director of data, research and policy at United Nations Children's Fund.

The status of early initiation of breastfeeding in India is very grim: Only 41.4 per cent new born children are breastfed within an hour of birth. This varies from state to state.

The reasons behind the poor numbers are myths towards breastfeeding practices, lack of quality antenatal and post natal services and weak and deficient provisions of maternity entitlements.

There is very slow improvement in early initiation of breastfeeding. According to National Family Health Survey (Round 3; 2005-06) 24.5 per cent newborns were breastfed, while 41.4 per cent receive after ten years. It means there is an increase of 16.9 per cent; if it improves at this pace, it will take 34 years for us to ensure early breastfeeding for all children. 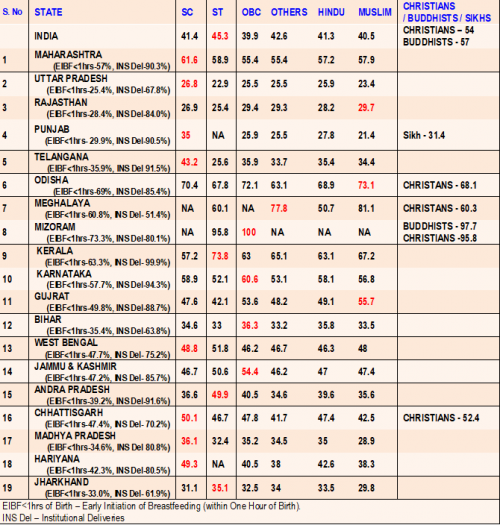 Breastfeeding among social and religious groups

At the country level, among the last-born children born in the past two years who were ever breastfed, 41.5 per cent received breastfeeding within one hour of birth.

In Uttar Pradesh, overall 25.4 per cent children breastfed within one hour of birth. Among different communities the level of early breastfeeding was: 26.8 per cent in SCs, 25.9 per cent in Hindus, 25.5 per cent in OBCs and 23.4 per cent in Muslims.

In Rajasthan, only 28.4 per cent children received early breastfeeding. Among all communities Muslims and other communities were better placed with 29.7 per cent and 29.3 per cent respectively, whereas 28.2 per cent Hindus, 26.9 per cent SCs and 25.4 per cent STs children were breastfed early.

In Punjab, 29.9 per cent children are breastfed within one hour of birth. SC communities were better placed with 35 per cent, followed by Sikhs with 31.4 per cent.

Madhya Pradesh has an overall problematic scenario as only 34.6 per cent children received early breastfeeding and among them SCs (36.1 per cent) and STs (35.2 per cent) are placed above the state average.