Gender decides how healthcare expenditure is financed in India

Females are always at a more disadvantaged position in terms of healthcare financing, according to our analysis 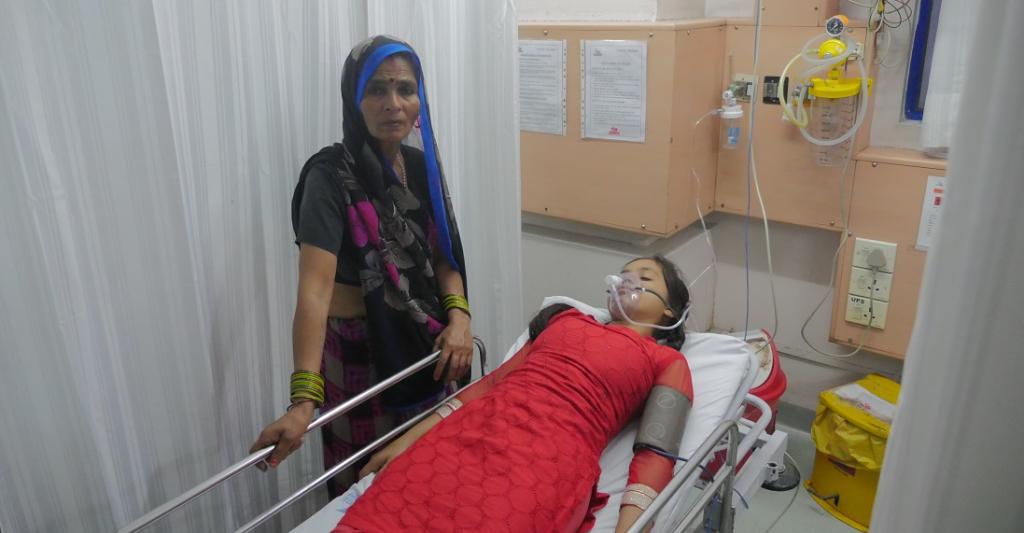 Accessibility and affordability of healthcare services depend on how healthcare expenditure is financed. One of the worrisome and perhaps unsustainable aspects of healthcare financing is the huge out-of-pocket (OOP) expenditure that households have to shell out.

OOP expenditure can be defined as direct payments made by individuals to healthcare providers and institutions at the time of availing healthcare services. This excludes any pre-payment for health services in the form of taxes or insurance premiums, reimbursements, etc.

During the said period, government health expenditure (GHE) as percentage of THE stood at only 1.18 per cent of gross domestic product. The commitment of India’s public financial resources towards healthcare is one of the lowest in the world. This does not augur well in a country where the have-nots in society are also the most vulnerable to various diseases.

These facts mean that a huge burden is being imposed on the population to either shell out from their own savings or borrow to finance their healthcare expenditure.

Not being able to finance would result in some section of the population foregoing treatment for want of finance or resort to desperate financing. In this conundrum of high dependence on OOP expenditure, coupled with rising healthcare expenditure, the vulnerable section(s) of society are the worst sufferers.

We tried to find out to what extent did a gender gap exist in households’ strategies towards financing health care expenditure. For this, we looked at the 75th National Sample Survey, Household Social Consumption: Health, 2017-18.

We analysed those households that had witnessed hospitalisation of at least one male and one female member of the household in the last 365 days. Through this criteria, we believe that the analysis will truly reflect the behavioural pattern of households.

Percentage distribution of households with major source of healthcare financing 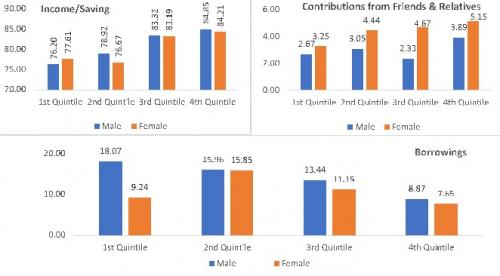 Source: Calculated by authors based on the NSS data

Our analysis showed that households, irrespective of gender, would primarily dig into their income and savings to meet hospitalisation expenditures. The extent to which such financing would be resorted to, would largely depend on the economic status of the household.

Households falling in the upper quintiles (3rd & 4th), with more disposable income, were better-off and could finance their healthcare expenditure out of their savings (above 83 per cent), with lesser dependency on other sources.

However, households in the lower quintiles would also first dig into their savings. But this being insufficient, they would go in for ‘distress financing’ in the form of borrowings (the next preferred source of financing), sales of physical assets and other sources of financing.

There is no apparent divergence in financing healthcare through income / savings for male and female hospitalisation. But when the need to avail finance through borrowings arose, female patients were in a disadvantaged position.

Households would be more reluctant to resort to borrowings for financing female hospitalisation expenditure. This bias in behaviour cut across economic groups, with lower variation observed in the higher quintile groups.

Thus, if financing involved repayment, we observed a gender bias. Surprisingly, households were also dependent on ‘unreliable’ sources like contributions from friends and relatives for financing. This was more so for households at the higher quintile.

For plausible reasons, further probing will be required. But here too, gender bias is observed where female patients are more dependent on such sourcing as compared to their male counterparts.

How are states placed with regard to sourcing for healthcare between the genders? There are a few stark examples to show the disparity.

For instance, in Haryana, which has one of the lowest female-to-male population ratios, we found instance of borrowings for healthcare financing at 32 per cent for male and only 3.8 per cent for female hospitalisation.

There is a gender bias

Our analysis clearly proves that the OOP expenditure is largely being financed through income / savings for both male and female hospitalisation, with differences among the various economic status groups.

This bias is evident as borrowings would involvement repayment. This argument is well supported by the fact that in-female patients have to depend on contributions from friends and relatives and other sources as compared to in-patient males.

This particular characteristic is common across economic groups. If this is the phenomenon during normal times, we can unfortunately conclude that the same bias has existed during the current novel coronavirus disease (COVID-19) pandemic.

Thus, a high OOP expenditure, coupled with lesser preference by households to resort to borrowings, a relatively higher dependence on contribution from friends and relatives and higher incidence of female hospitalisation requires further investigative research.

With the kind of social status and hierarchy that they have, coupled with fewer employment and economic opportunities, females are always at a more disadvantaged position in terms of healthcare financing.

To mitigate the problem, certain steps like differentiated interest rates of borrowing or some kind of easy financing through the government for females in case of hospitalisation can be thought of.

Insurance companies can also fine tune their health insurance products to tap this segment of healthcare financing. The criteria for inclusion of households under the Ayushman Bharat scheme can be relaxed to cover especially those households with female members of lower income groups.

At the outset, a thorough survey and research study would be required as to understand the unique, varied and distinct issues faced by females in financing their healthcare.