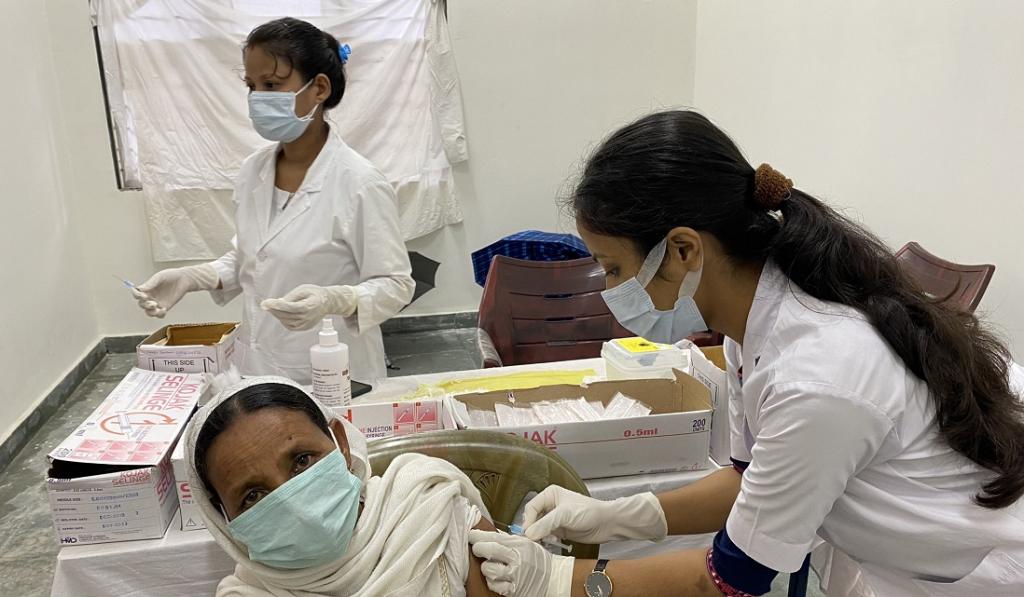 Vaccination being carried out at LMCH NLP, a government medical college in Assam. Photo: @LMCHAssam / Twitter

The current scenario of the novel coronavirus disease (COVID-19) in India has forced the government to roll out a vaccination drive for all adults above 18 years of age. The magnitude of this crisis has also led the government to ramp up the production of vaccines to 65 million doses per month, from 50 million doses per month. India has also started importing vaccines to cover shortages.

The Government of India started its first COVID-19 vaccination drive January 16, 2021 for an estimated 30 million health and frontline workers. Later, senior citizens above 50 years and people under-50 years with co-morbidities were vaccinated.

Now, the government has mandated every citizen to register for vaccination and schedule a visit to a centre through a dedicated website and mobile application. The process looks straightforward and user-friendly outwardly. However, the ground reality is vastly different.

Data (as of May 20, 2021) from CoWin has exposed the darker side of digitalisation in India.

On the other hand, the same report by Harvard states that Kamrup Metro in Assam ranks in the top seven districts in India that have administered the first dose. The alarming disparity between the two districts of Assam endorses the digital divide narrative.

The recent National Family and Health Survey – 5, 2019-20 has reported that 75.4 per cent of women in urban areas of Assam have a mobile phone for themselves. In contrast, only 53.9 per cent of the rural women population has to access to mobile phones. The Harvard report thus highlights the digital barriers across Assam.

‘Digital Divide’ is defined as the economic and social inequality experienced in accessing information and communication technologies (ICT) or digital services due to existing complex social divisions.

Growing inequities in social settings result in an unequal distribution of resources, which trickle down to a specific group of people based on their socio-demographic attributes. The digital divide in India is based on gender, urban-rural settings and education qualifications, which largely aggravate inequities.

Previous studies identified that benefits of ICT are accumulated among the already resourceful section, whereas the marginalised are systematically excluded from the whole process of digital inclusion.

Digital discrimination has posed significant concerns in the last few years as the Government of India has tried to initiate schemes and programmes digitally. The vaccination drive through CoWin has conveniently ignored the digital divide.

In the context of Assam, it has been observed that the online registration process for the vaccine has completely disregarded the digital barriers among the rural population of the state. Mandatory online registration over the walk-in facility for vaccination is estimated to further widen the inequities in access to the vaccine. This will make the digitally disadvantaged population more vulnerable to COVID-19 infection.

Sadly, most of the slots in rural villages of Assam have been booked by the residents of urban areas. As the urban spaces for vaccination usually get exhausted within a 10–15-minute window, the privileged urbanites head to rural vaccine centers for their jabs.

Closely analysing the district-wise administration of doses, it is found that districts adjacent to major towns in Assam have a higher number of administered vaccinations than those away from all the major cities.

For instance, districts closer to Kamrup (Rural and Metro), such as Morigaon, Darrang, Nalbari, Goalpara and Barpeta, have recorded a higher number of administered doses compared to districts away from Kamrup.

Similarly, districts close to Dibrugarh in Upper Assam also reflect similar trends. Districts with a higher number of vaccination centres have administered fewer vaccines than the districts with fewer vaccine sites such as Dhemaji, Sivasagar and Charaideo.

This disparity endorses the fact that proximity to an urban region significantly influences the number of vaccinations administered.

In addition to urban-rural factors, economic indicators also contribute to widening vaccination inequities. The state expects citizens from the lowest quintile to technologically compete with the already-favoured citizens. This displays a lack of empathy towards the more significant section of society.

Viewing every citizen on a similar pedestal will further widen the gap. Letting the not-so-smart phone users book slots for themselves through a mobile application is a total disregard of the demographic fabric in India.

The race to book the vaccine slot reminds one of the social darwinism theory propounded by Thomas Henry Huxley. Social Darwinism propagates that society as an organism survives by eliminating the poor and the rich survive as the fittest.

Unfortunately, despite understanding the proportion of the rural population in Assam and India, the policy blindness of access to ICTs by every citizen of the country is merely ignorant of the ground reality. The framing of policy decisions should be data-driven rather than a loosely observed phenomenon.

Given the current digital discrimination scenario in Assam, it becomes pertinent for government agencies to intervene and ensure equitable distribution of vaccines across the rural-urban setup. The growing disparity can be reduced by setting up multiple registration camps across the vaccination centres.

Hiring a workforce other than healthcare workers for registration can also provide employment opportunities for the younger population. Other than setting up registration camps, SMS booking can be an effective way to ensure inclusion for all people.

Government departments such as social welfare, anganwadi centres, panchayat offices can be engaged for the vaccine registration. The right to health and well-being should not be restricted to an individual’s access to digital devices and faster internet services.