The apex food regulator of the country — Food Safety and Standards Authority of India (FSSAI) — released its final report of the National Milk Safety and Quality Survey (NMSQS) on October 18 this year and gave a clean chit to milk available in India as being ‘largely safe’.

A close look at the report however suggests otherwise. It clearly shows that a substantial proportion of milk samples, particularly processed milk, is unsafe for consumption and it chooses not to inform consumers about these brands of processed milk. It also does not provide important information pertaining to antibiotics in milk.

As stated in the report, FSSAI had collected milk samples (both raw and processed) from local dairy farms, vendors, retail shops, milk mandis, and processing units across all states and Union Territories of India.

These milk samples were subjected to tests for quality and safety. Quality tests included those for fat and Solids-Not-Fat (SNF). Safety was evaluated based on the presence of adulterants and contaminants. Twelve adulterants (such as urea, sugar, maltodextrin, etc) and three categories of contaminants (aflatoxin M1, antibiotics, and pesticides) were evaluated.

An in-depth look at the data on unsafe milk samples show that over 10 per cent of the processed milk samples (271 out of 2,607) in the country are found unsafe due to presence of contaminants such as aflatoxin M1, antibiotics, and pesticides above the tolerance limits set by FSSAI.

In other words, one in 10 packets of the milk bought by consumers could be unsafe. Apart from processed milk samples, 4.8 per cent of raw milk samples (185 out of 3825) were found to be non-compliant for safety.

It is worrying and intriguing as to how contaminants continue to remain in processed milk, in higher probability, despite having undergone several levels of processing and checks by the organised sector.

“The message from the central food regulator is confusing. The report suggests otherwise. Sadly, milk does not appear to be as safe as it is being communicated”, says Amit Khurana, director of the programme on food safety and toxins, Centre for Science and Environment (CSE).

By not informing about the brands of samples found unsafe, the report has left consumers clueless and does not help them make an informed choice. Moreover, it is unclear if this is about few national-level brands or multiple local brands.

Since long-term exposure to aflatoxin M1 can cause cancer and presence of antibiotics in foods has linkages to antimicrobial resistance (AMR), a global public health threat, it is important that a correct message about milk safety should have been communicated to the public. This is particularly important as milk is a staple in most Indian households, especially those with children.

The results clearly show that presence of unsafe milk is a country-wide problem, unlike what is said in the report that “the problem is restricted to a few pockets and in some states”. Unsafe milk was reported from 21 states and two Union Territories (see ‘State of the states’).

The question of antibiotics

Antibiotics in milk are a big concern as out of the three contaminants, antibiotic residues in milk can be attributed to their deliberate use in dairy production. Moreover, unsafe levels of antibiotics that were detected in 77 samples from 13 states and two Union Territories, suggesting that the problem is widespread; particularly for the processed milk sector (40 out of 77 were of processed milk).

On the other hand, out of the 37 raw samples, 20 were from Madhya Pradesh, making it more of a state-level issue and not a pan-India scenario.

“Antibiotic residues in milk from across the country are a big concern. To contain antibiotic resistance, antibiotics must not be allowed to be misused in the dairy sector. They should not be used for non-therapeutic purpose and those which are critically important for humans should be regulated,” adds Khurana.

The report does not provide necessary information related to antibiotics in milk. It does not tell us which antibiotics were found at unsafe levels. It also does not inform about samples with antibiotics present but within limits set. There is no mention of levels of antibiotics found, so one does not know if antibiotic residues found were just above or many times higher than the limits set.

It is unclear whether only classes of antibiotics (beta-lactams, sulfonamides, quinolones, tetracyclines) were tested or individual antibiotics belonging to these classes were also tested.

The report also mentions that 93 antibiotics and veterinary drugs were tested according to the Food Safety and Standards (Contaminants, Toxins and Residues) regulation. But the actual number of antibiotics tested could be less as only 29 are antibiotics in the list mentioned in the regulation.

Moreover, it can be inferred from the report that veterinary drugs were not tested at all. Further, apart from the four classes, there are several antibiotics for which standards have been set by the FSSAI but not tested like Streptomycin, Neomycin, Apramycin, and Colistin (which was banned in July 2019 but was allowed to be used at the time of survey).

But most importantly, antibiotics which are commonly used in the dairy sector but their upper limits are not set so far, are not included in this survey like Gentamycin and Amikacin.  Else, the number of unsafe samples would have been more. 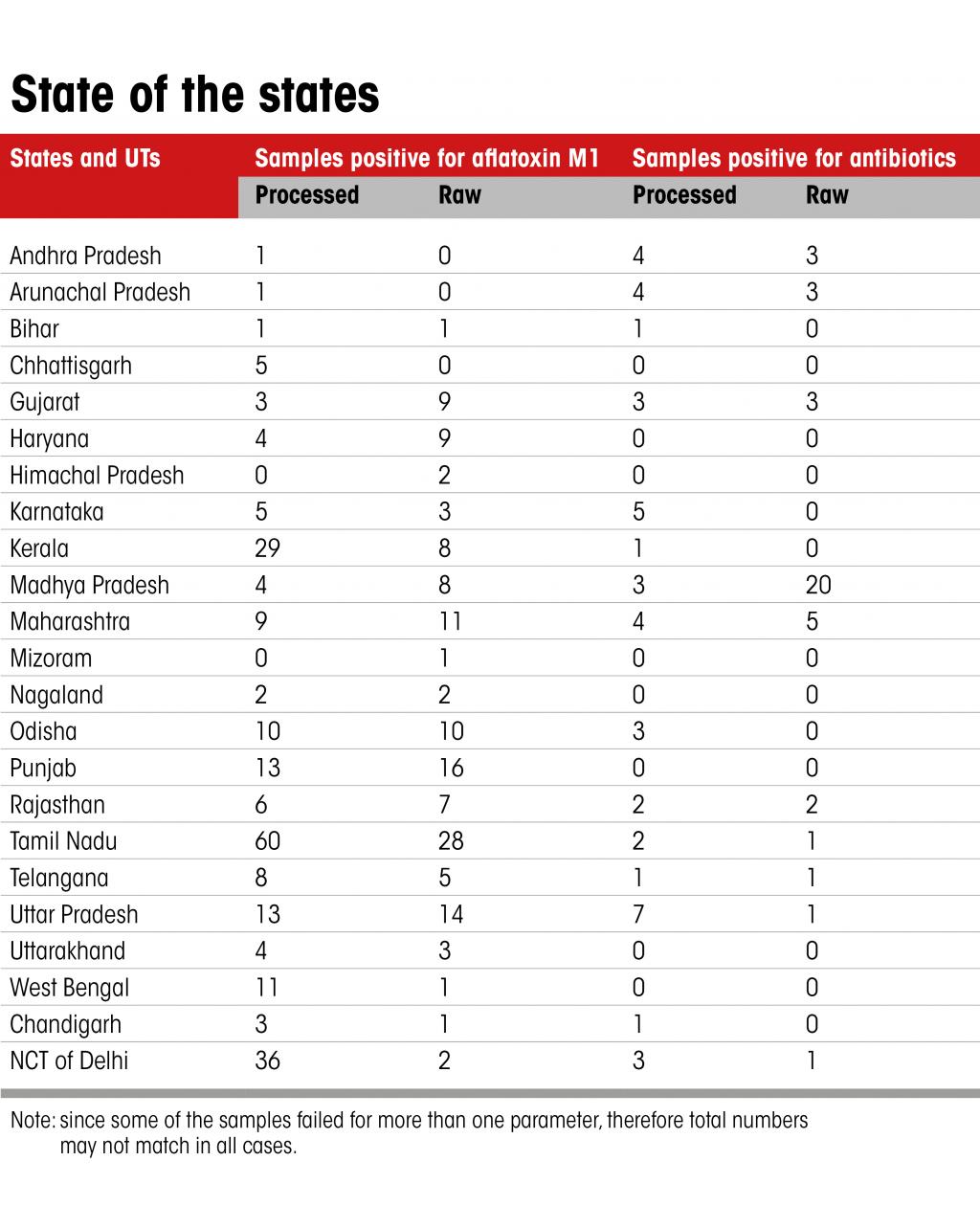