Mitanins: The women who kept Chhattisgarh safe during the COVID-19 pandemic

The administration, however, has not compensated other Mitanins’ work adequately and has thus been misusing their sense of social commitment 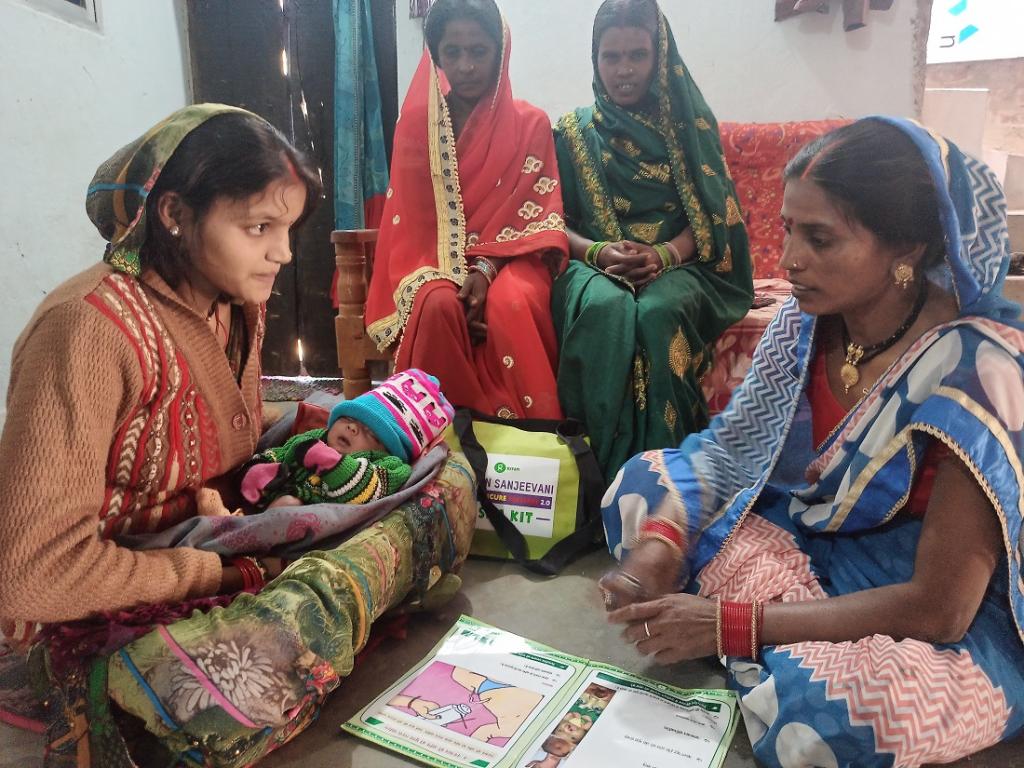 A Mitanin on a visit to a new born’s house.

50-year-old Saraswati Kaushik’s day starts at 5 am. After preparing food for the family and an hour or two of farm work, she goes for home visits in her ‘para’ (locality) to check on pregnant mothers, infants, kids below five years of age, elderly people in need of treatment and those who are ill — technically everybody in the para.

She educates women on breastfeeding, nutrition for babies, care during pregnancy, checks for malaria and tuberculosis cases and refers malnourished and ill people to the health centre.

Kaushik also has to ensure that women are taken to a hospital for delivery and children are timely immunised. For her para, people in Gochiya village in Chattisgarh’s Kabirdham district, Kaushik is no less than a doctor.

In the last two years, when COVID-19 engulfed the country and the whole world worked from home, she went from house to house telling people how to protect themselves and ensuring the quarantine and safety of the returning migrant workers.

When the COVID-19 vaccine was introduced in March 2021, the responsibility to have the entire village vaccinated fell on her shoulders and she was out of home from 10 am to 7 pm — like any office-goer. Except that she does not get a salary like one.

When Chhattisgarh was carved out of Madhya Pradesh in the year 2000, one of the problems staring in the face was the run-down health infrastructure. Recognising its inability to reach the population in the interiors, the state came up with the concept of selecting women volunteers who would act as a bridge between the people and public health facilities. The women health volunteers were called Mitanin.

Chattisgarh, thus, became the first state to implement the concept of community health workers — which in 2005 was adopted by the central covernment as the Accredited Social Health Activist (ASHA) programme.

“As a new state Chhattisgarh had an environment to try out new ideas. Non-profits had already introduced this model of community health workers in some places, but our challenge was to scale it up to the state level before bureaucrats or politicians changed and the interest in the scheme dwindled,” said Samir Garg, executive director of the State Health Resource Centre (SHRC) that runs the programme for the state government.

On December 27, 2021, Kaushik participated in a dharna in the state capital Raipur to protest against non-payment of dues for work during the COVID-19 period ie, Rs 1,000 per month as promised by the government.

Over 20,000 Mitanins participated in this protest. From being a nervous ‘bahu’ (daughter-in-law) to an activist in her own rights, a lot has transformed for Kaushik in the last 18 years. “Jan seva mein maza aata hai,” she said, now empowered with the social respect and skillset that she picked up.

The administration, however, by not compensating Kaushik’s and other Mitanins’ work adequately, has been misusing their sense of social commitment. There are no fixed work hours for the 70,000 Mitanins in the state.

“A delivery can come at any hour and vaccination camps are conducted even on Sundays. During the first wave, migrants would reach the village at night, and we were made to run around making arrangements and checking on them. But they are our own people, we can’t say no to the work,” said Pushpa Chandrakar, a Mitanin in the nearby Kuan village.

“But when we protest, the government says that why should you be compensated, aren’t doctors and auxillary nurses and midwives working equally hard? But they are the paid employees of the government, not us. We pay from our own pocket even for the commute and the saree, that they have designated as uniform for the Mitanin,” said Richa Yadav, Mitanin from Gochiya.

For a frontline health worker, the Mitanins were also ill-equipped to handle a pandemic of such large proportion, especially during the second wave, when COVID-19 spread to rural areas.

“All the government gave us was two masks. When the migrants were lodged in the village school for quarantine, we had to report about their health conditions but did not have even a thermometer to check fever. We stitched our own cloth masks and carried a water bottle and soap in our bag to wash hands after we met families,” said Kunti Yadav, another Mitanin in Gochiya.

“The Mitanins were properly trained to use this equipment for effective use in the field,” said Prakash Gardia, Oxfam India’s Project Coordinator in Chattisgarh.

“We now carry a sanitiser with us all the time and extra masks to distribute to people who don’t have any. We also use gloves when we go to meet an infant or for a delivery. This at least ensures our own physical protection,” said Santoshi Sahu of Kuan.

The Chhattisgarh ASHA programme has an edge over other states — there is a Mitanin for every para instead of one for every 1,000 people in other states and an exclusive autonomous body, the SHRC, which is a civil society and state government collaboration.

The SHRC designs training modules, holds meetings with the community and designs booklets for use by Mitanins and monitors the system down the line via district and block coordinators. The body has also been raising issues like improvement of wages and doing away with unnecessary written work.

“These records are never even seen by the government officials. But since the government pays for it, they feel they can impose it. The exemplary social work done by the Mitanins needs to be recognised by better payment, more skills and more autonomy, they should not be told to fit their schedules as per the requirements of the government medical staff but left free to design their own work,” concluded Garg.