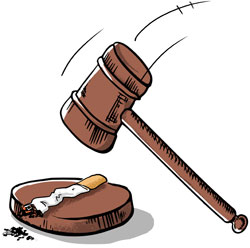 We can start 2016 on a cheery note. We can celebrate a victory that cuts through the smoke, literally, of intellectual property rights (IPRs) and the legal chicanery of multinational cigarette firms. In mid-December, tobacco giant Philip Morris lost a long-running legal battle against Australia over its plain packaging law for cigarette companies which it challenged as a trademark infringement.

The pioneering Australian legislation of 2011 does away brand logos and also calls for cigarette packs to be covered largely with gruesome visuals of the health hazards of smoking. So, cigarette firms have to embellish their packs with images of rotting gums and diseased lungs or of deformed children and dying smokers, to warn people of the grim consequences of smoking.

You would have thought that every sovereign government had the right to enact such laws in the interest of public health. But no, say cigarettes companies which have resorted to devious and costly means to get countries such as Australia and Uruguay to roll back their enlightened policies. Big Tobacco, with billions of profits at stake, are using bilateral investment treaties (BITs) to sue governments in international locations to claim their IPRs have been violated because their trademarks are no longer distinctive on cigarette packs. Under the egregiously unfair terms of BITs, companies are allowed to sue a country if any policy impacts their profits. For a detailed exposition of how BITs are misused by corporate entities to protect profit at the cost of public good, see “Investment terror”, a cover story (Down To Earth, 16-31 January, 2012) which flagged the dodgy battles that have been launched across the world in investor-state disputes.

Philip Morris, maker of Marlboro brand of cigarettes, first picked on tiny and poor Uruguay to fight the plain packaging rule by seeking an undisclosed but huge amount in compensation for its rule which had reduced smoking by an estimated seven per cent in just a few years. At the time, Uruguay had a gross domestic product of $40.27 billion whereas the cigarette giant boasted market capitalisation of over $137 billion. However, it is the aggressive reaction of cigarette giants to the Australian law that has caught global attention. It bans the use of tobacco company logos and symbols, but allows brand names and their variants to appear in a standard colour.

The central question in this legal dispute is whether IPRs have been violated by such laws and whether international dispute settlement tribunals which hear cases brought under BITs, have the jurisdiction in such cases. While the first issue is yet to be settled, on December 17, the Permanent Court of Arbitration in Singapore, which was to oversee the Philip Morris challenge, declared it didn’t have jurisdiction. This means Australia’s laws will remain in force.

It also means that more countries will now feel more confident of taking on Big Tobacco. Half a dozen countries have passed legislations on plain packaging and another 20 are in the process of doing so. Some of these nations are facing the money power and legal muscle of tobacco giants. In the UK, for instance, British American Tobacco, Imperial Tobacco Group, Philip Morris and Japan Tobacco International are challenging a law passed in March 2015 requiring plain packaging from 2016 in the London High Court. It is a case that will have repercussions across Europe.

What of India? The government had, in 2008, passed a law requiring graphic warnings on cigarette packs but did not bother to implement it. Thereafter, in response to a public interest litigation, the Allahabad High Court had directed the Union government to take stringent steps to enforce the plain packaging rule. The government did issue a notification but its implementation remains clouded in a bureaucratic smokescreen.