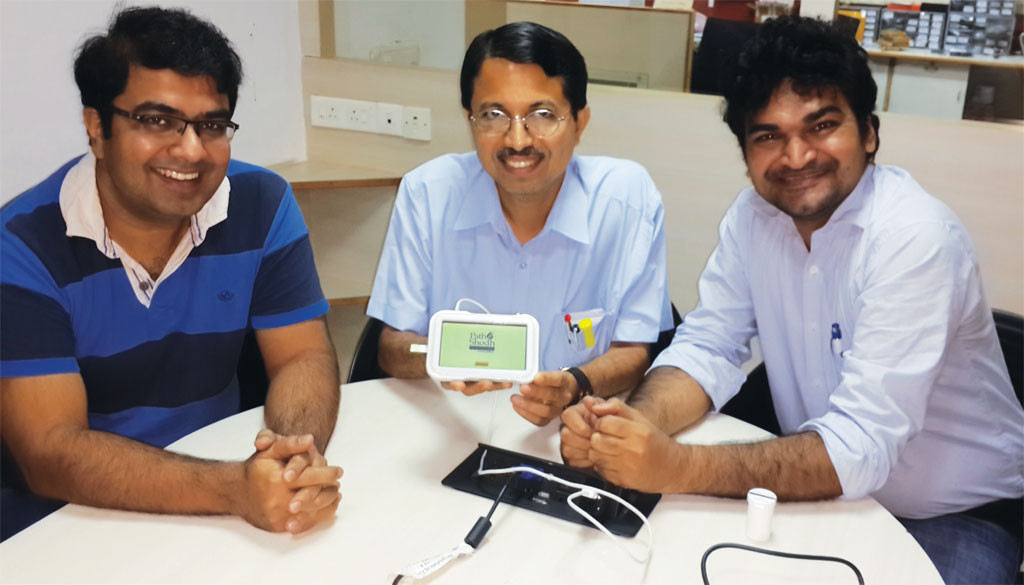 If you are a diabetic—and there are about 65.1 million diabetics in India—or have a family history of diabetes, you would know that regular monitoring through multiple tests is the key to fight the disorder. At present, these tests are done in labs and they take at least 24 hours to deliver the results. They are expensive too. Instant glucometers only monitor blood sugar levels and are not always accurate.

But this scenario could change soon. A team of researchers from the Indian Institute of Science (IISC), Bengaluru, has engineered a device which could revolutionise diabetic treatment. The device can compute eight different tests essential for diabetes management in a few minutes. These tests include blood sugar, hba1c (which gives a trend of what average blood sugar levels have been over a period of weeks/months), haemoglobin, glycated albumin, microalbuminuria, urine acr (albumin/creatinine ratio), urine creatinine and serum albumin.

The technology is non-invasive and doesn’t require medical procedures like sample preparation and storage. Using the device is also simple—a prick for a drop of blood that has to be placed on a paper strip, and in less than two minutes, the results flash on the digital monitor.

Navkanta Bhat, the lead researcher at the Centre for Nano Science and Engineering (CENSE) at IISC, says the device will help healthcare professionals, physicians and, more importantly, individual patients to monitor and manage their diabetes better.

To market the product, the researchers have patented the technology and founded a company, PathShod Healthcare Pvt Ltd. The co-founders are Bhat, Vinay Chauhan (who became a diabetic when he was 14-years-old) and Gautam Sharma. They have also filed for a patent for the strip. The device is pocket-sized and has a touch screen display, just like a mobile phone.

Once the paper strip is inserted, the device is automated to decipher what test is required. The display screen then guides the user on how to proceed. “We are developing an application for users having a smart phone,” adds Sharma. The application will be connected to the database which will provide information on test results as old as one year. This data can be mailed to physicians to facilitate easy follow ups.

Conventionally, approximately 5-6 ml of venous blood is taken from the patients and the blood sample is stored at an ambient room temperature. However, the Path- Shodh device requires only a tiny blood drop (less than 20 microlitre). “Since the device doesn’t require sample preparation, no chemicals and reagents are required. This further cuts costs,” Bhat told Down To Earth.

He says developing the test for albumin was challenging because it is a protein and acts as an insulator, not allowing electric current to pass through it. “Since our invention is based on the principle of electrochemistry, we found it difficult. To resolve the problem, we designed paper strips to measure the metal ions that attach themselves to the protein molecule. The biomarker for testing this protein is directly proportional to the amount of metal ions present,” adds Bhat. A diabetic needs to frequently monitor albumin levels, a protein which if found in urine, is an indicator of poor kidney health. It can even cause kidney failure. “At present, albumin test results take at least 48 hours, and this device will reduce the time period to a few minutes,” adds Chauhan.

The current market rates for these tests are expensive to say the least. While the rates for blood tests vary across the country, testing microalbuminuria could cost as much as I500, urine acr test could cost I420 and the hba1c tests costs I400.

The company plans to provide the instrument free to customers, so the only cost is that of the strips. Each test is likely to cost about I150 only. The price is likely to dip further when the strips are manufactured in bulk. The company is finding investors for this initiative. The manufacturing of strips is now being done at IISC and a new unit is being established.

Instant glucometers in the market must provide results that are within 20 per cent of the laboratory standard 95 per cent of the time. However, a number of factors affect its accuracy. These include calibration of meter, ambient temperature, pressure use to wipe off strip, high levels of certain substances such as ascorbic acid in blood, dirt on meter, humidity and aging of test strips.

Keeping these errors in mind, Bhat’s team is busy testing the device. The researchers say that the device is accurate as results show a plus-minus 20, which is a gold standard accepted worldwide. The device is being tested by S S Srikanta of the Samatvam Endocrinology Diabetes Center in Bengaluru. Srikanta, who has been testing the PathShodh device for the past five months, says this device will be very useful in every healthcare situation, especially in remote clinics and primary healthcare centres.

Sharma says the device will be available through hospitals and physicians but will not be immediately available as an overthe- counter product. The researchers recently demonstrated their device during the “Festival of Innovation” at Rashtrapati Bhavan in New Delhi.