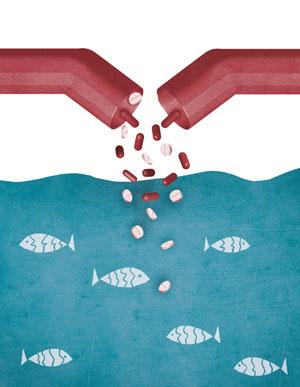 So now even bread, the proverbial staff of life, can imperil health. Recent revelation by the Centre for Science and Environment that most branded breads sold in the capital are laced with known carcinogens has caused much alarm and dismay. The bakers first denied it vehemently, and then went on to promise never again to use the culpable chemicals in their products.

Ever since farming became industrial and processed food the staple of modern life, chemical contamination of our foodstuff has become a clear and present danger. But there is another, probably more insidious, world of chemical malefactors that are slowly infiltrating our ecosystems: pharmaceuticals. What is scary is that we know it is happening, but we choose to look the other way. Recently, the US Geological Survey found triclosan, an antibacterial added to products like soaps and toothpaste, in nearly 58 per cent of freshwater streams in the country. Triclosan crumbles into compounds that can potentially disrupt hormones. Three years ago, Klaus Kümmerer, a researcher at Leuphana University of Lüneburg, Germany, detected high levels of metformin, the most popular anti-diabetic drug in the world, in water samples collected from sea and river water, drainage streams, even in municipal drinking water supply. This is worrisome as humans excrete the drug unaltered even 24 hours after popping it. Recent studies have indicted the drug for tampering with the reproductive machinery of male minnows.

That drugs like metformin as well those that break down into potentially harmful derivatives are vitiating the environment is not a new discovery. Unfortunately, as a special issue of Philosophical Transactions of the Royal Society B on pharmaceuticals in the environment points out, ecologists have examined the impact of only a sprinkling of the estimated 4,000 pharmaceuticals used across the world. So far, most impact studies have focused on antibiotics and female sex hormones such as estradiol used in contraceptives, but recent research has implicated anti-depressants such as Zoloft and Prozac—significant portions of which are flushed unused into our waste streams—in meddling with the biology of aquatic life.

Pharmaceuticals can also have a domino effect where species higher up in the foodchain end up ingesting these drugs at levels much higher than those found downstream. The mysterious decimation of vultures in India and Pakistan a decade ago is a classic illustration of this knock-on effect. After much speculation, it turned out that the majestic scavengers had absorbed diclofenac in fatal quantities from the carrions of livestock that had been treated with this drug for lameness and fever.

Pharmaceuticals make their way into wastewater predominantly via human urine and faeces. Sewage treatment plants take care of a few (at least in the US), but a large number of drugs still slip through undetected. New technologies like nanofiltration can take care of a few more, but are very expensive. So most of the drug residue escape sewage plants and landfills and find their way into our water sources.

The trouble with drugs is that they are so designed as to remain robust on their long journey from the factory to the drug store and eventually to the patient. A few of them remain stable even inside the human body. This robustness, however, is the bane of the current problem as it makes the drugs persist and accumulate in the environment, thus posing a hazard to human health.

Some researchers suggest we should nip the problem in the bud by designing drugs that break down into benign substances in the environment. A radical idea, but, as always, the question is: who will bell the cat? Will drug companies do it voluntarily or will it require a new law to make it happen?