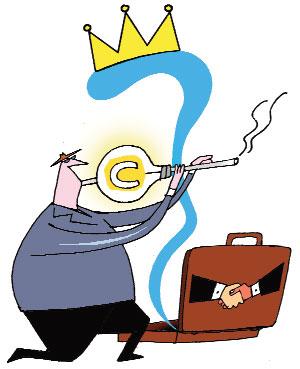 Most readers might find it difficult to credit what follows. This is a story of how bilateral and multilateral investment treaties are being used to satisfy corporate greed, how large corporations, even those in the unsavoury business of selling cigarettes, can sue countries for passing public health laws intended to protect their citizenry from health hazards and killer diseases.

It’s also a tale of how the World Trade Organization’s (WTO) principle of a government-to-government dispute settlement mechanism is being replaced by a direct challenge to nations by foreign investors.

Don’t believe me? Here’s what Philip Morris International, the world’s second largest cigarette company and manufacturer of brands such as Marlboro and Red & White, did. Last year, it sued tiny Uruguay for its regulation that requires tobacco companies to cover 80 per cent of their cigarette packs with pictorial tobacco-warning labels and to use plain or coloured packaging.

Former President Tabare Vazquez, an oncologist, had banned smoking in public buildings five years ago and his successor José Mujica banned tobacco advertising and the sale of products branded ‘light’ or ‘mild’.

In February last year, Philip Morris filed for arbitration at the World Bank’s International Centre for Settlement of Investment Disputes using a 1988 investment protection treaty that Uruguay had signed with Switzerland—the company’s operational headquarters is in Switzerland—to claim damages for infringement of its intellectual property (IP) rights. Specifically, it claims that Uruguay has expropriated its IP without compensation; has failed to treat its investment fairly and equitably; and has unreasonably impaired the use of its investment. It has sought undisclosed damages from the tiny Latin American country—the company describes these as substantial—in the first-known investment treaty claim against tobacco regulations.

Uruguay is not the first country to have strict regulations on cigarette packaging and it is telling that Switzerland itself has restrictive regulations. Long before the case was filed against Uruguay, the tobacco giant had investigated the case against plain packaging and a legal consultant appointed by it had found that “a plain packaging measure would create a two-tier system: one which severely restricts the use of trademarks and is only applicable to tobacco companies, and another which affords the minimum standards of protection to all other products. Such discriminatory treatment of trademarks is expressly prohibited by the TRIPS Agreement.”

The report by Lalive, the consultant, cites a long list of tobacco-related cases that have been filed by various countries at WTO’s disputes settlement body. So why has Philip Morris chosen to file its claim against the government in Montevideo? Was it because it had no hope of persuading Switzerland to approach WTO? Or was it because a case against Uruguay would act as a deterrent to other nations like Australia, which is scheduled to introduce plain packaging measures in 2012?

This is where the story takes an unbelievable turn. Right now, Philip Morris is engaged in a high-profile campaign to have a clause inserted in the Trans-Pacific Strategic Economic Partnership Agreement (TPPA) that is being currently negotiated so that it can sue Australia and other signatories to the pact if they introduce plain packaging! The TPPA is being negotiated by Australia, New Zealand, Singapore, Brunei, Vietnam, Malaysia, Chile, Peru and the US, and the cigarette company has asked the US Trade Representative to weigh in on its side.

What Philip Morris wants is an investor-state dispute settlement provision inserted in the trade agreement that would allow it to sue governments that introduced legislation “impeding foreign investment”. This has created a huge ruckus in Australia and New Zealand; a paper submitted by the latter warned partner countries that they need to be cautious about IP provisions in any agreement. The Auckland government is particularly concerned about the inclusion of IP because of its impact on use of generic medicines in public health programmes.

In a far-reaching suggestion, New Zealand has urged negotiators “to maintain an open dialogue” with groups opposed to strengthening of IP rights and warned that it is assuming a significant political dimension in many societies. This is of particular relevance to India, which is tying up free trade agreements (FTAs) with several countries. Health workers, agriculture experts and the generic medicines industry have been putting out a series of warnings on the inclusion of IP in such FTAs, the most pernicious being the ongoing negotiations with the European Union. IP as investment is a new addition to the EU FTAs, and India needs to watch out for potential claims of expropriation under the investment chapter.

As the Philips Morris case shows, any corporation can potentially sue the Indian government in a bid to block sovereign actions for protecting the wellbeing of its people. Be warned: IP in bilateral investment treaties is injurious to the health of most nations.