Tribals in Nagada suffer from severe malnutrition, other health issues

A tribal woman in Nagada stands next to her nutrition garden Photo: Atreyee Kar/Trickle Up

There are approximately 582 people who belong to the Juang tribe in Odisha’s Nagada. This tribe is one of the 13 particularly vulnerable tribal groups in the state.

Nagada is a cluster of hamlets, located at Mahagiri mountain range in Odisha’s Jajpur, about 94 kilometres away from district headquarters.

One of the main reasons why Nagada remained untouched by development over the years was its inaccessibility.

Government outreach services were unable reach inhabitants of this cluster because it was in a remote area with poor infrastructure, including a lack of roads.

Tribals in Nagada suffered from severe malnutrition and other health issues as a result. The village lacked basic amenities needed for survival.

Nagada made headlines in July 2016, when 19 children died from severe malnourishment within a month. The state government immediately took action to not only address malnutrition, but also improve issues of infrastructure development.

The government also focused its attention on enhancing the livelihoods of the community, providing nutritious food to children under the age of six years and more through different line departments and social assistance schemes.

The Odisha Livelihoods Mission (OLM) also took instant action to address the needs of the community. 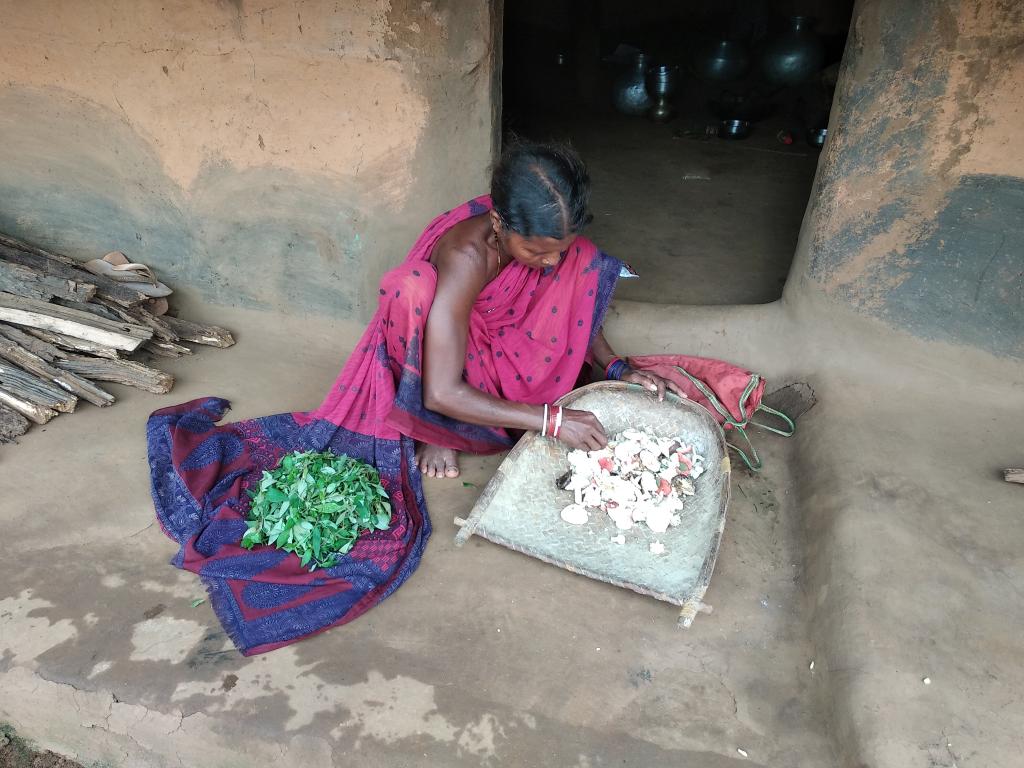 A tribal woman in Nagada examines produce from her nutrition garden Photo: Atreyee Kar/Trickle Up

The Odisha government and OLM felt that a focused intervention was needed to create an enabling environment for the overall well-being of the people in Nagada.

This called for combining strategies for immediate and long-term intervention, with non-profit Trickle Up chosen as a partner by OLM to lead the initiative.

Trickle Up realised that while food security could be ensured for poor households in Nagada through the public distribution system, it was not enough for overall development of the mind and body.

Food diversity was required to receive wholesome nutrition and develop to a person’s full potential.

This was absolutely critical for pregnant mothers, lactating mothers and for children below six years of age.

The community in Nagada lacked the resources and proper awareness to ensure food diversity and optimum intake of nutritious food.

The Trickle Up team working in Odisha faced this challenge by deciding to implement what is known to be one of the best solutions to tackle the difficult issue of malnourishment: The creation of nutrition gardens for families.

The promotion of nutrition gardens can reduce 70 per cent of the diseases caused by deficiency of vitamin A, according to a survey by the Food and Agriculture Organization in 2011.

A nutrition garden appropriately utilises space at the front and rear ends of a house to grow fruits and vegetables that can not only sustain the family, but also support their dietary requirements.

Seasonal vegetables are grown by utilising locally available waste and other materials as manure or fertiliser. They can be used for long periods to fulfill the daily needs of the household.

Approximately 60 households from Nagada adopted the practice of having a nutrition garden in their household during the kharif season, while 34 households adopted this practice during the rabi season.

Azim Premji Philanthropic Initiatives supported training needs to start and maintain the gardens. They also supported the procurement of seeds. These gardens ensure regular supply of the required amount of nutritious vegetables to the families.

A new addition to the behaviour change process was the introduction of the food festival in the community.

During this festival, the community is encouraged to cook together and eat together, while the field staff demonstrates new and nutritious ways to cook and eat papaya and yam – the abundantly available local produce that the community is not used to eating.

The initiative aims to add to the nutrition value of the food, while changing eating habits.

These processes have not just contributed to behaviour change, but also initiated healthy habits into the system of community living in Nagada.

Nutrition gardens encourage the optimisation of locally available resources for communities that stay in areas with fewer resources and limited connectivity.

The aim of Trickle Up is to have nutrition gardens throughout the year so that it actively contributes in reducing malnourishment rates in the community.