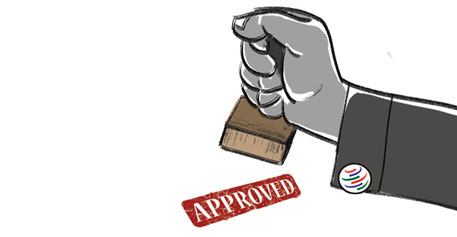 India's intellectual property rights (IPR) regime, under constant attack from the US and multinational companies (MNCs) over the past few years, has been given a clean bill of health by the World Trade Organisation (WTO). At a two-day trade policy review conducted by the apex organisation in early June, there was no criticism of a much contested section of the patent law nor was the country pulled up for issuing a compulsory licence (CL) for a cancer drug—another issue that has had the pharma giants frothing at the mouth.

Reports from Geneva said that India’s policies earned praise from many member-countries, although some others sought further easing of investment rules. This column, however, is concerned not with the broad sweep of Delhi’s trade regime but with IPR policies which have been unfairly targeted by the US and its business lobbies.

Ahead of the meeting, the WTO Secretariat issued a comprehensive report, running into about 174 pages, chronicling all major initiatives India had taken over the past four years. The report also listed trade-restricting.

These reviews are an exercise in which the measures taken by member-countries on trade promotion are periodically examined and evaluated by other WTO nations. The last review of India’s policies took place in September 2011—it happens every four years for developing countries—and the current review looked at developments since then. This is significant because the intense lobbying and fierce campaign against India’s patent regime has escalated in the same period.

The WTO report had nothing fractious to say about IPR concerns, although it accounted for a sizable part of its compilation on India. It did note, however, that the National Manufacturing Policy, while defining the functions of the Technology Acquisition and Development Fund, has stated that the Fund could approach the government for a CL for the technology that is either not provided by the patent-holder at reasonable rates or is not working in India to meet the domestic demand in a satisfactory manner. CL has become a sore point with pharma giants, although rich nations of the industrialised world have used it much more than developing countries.

In the case of India, the issue has been blown out of proportion with business lobbies claiming that the country had issued several CLs to manufacture patented drugs. It was significant, therefore, that the WTO review report laid such lies to rest by emphasising that “in March 2012, India issued its first and only CL” on a cancer medicine. This is not a small matter since American business and trade lobbies, through their Goebbelsian propaganda, have made the US Congress believe that India is a habitual user of CLs to override patents. On the other hand, “India has not issued any other CL even though two more applications for such licences have been received,” states the report unequivocally.

As for the controversial Section 3(d) of the Patent Act, WTO points out that the Supreme Court of India has said very clearly that it does not bar patent protection for all incremental inventions of chemical and pharmaceutical substances. The WTO report goes further to put the controversy at rest. “It would appear that the recent rejection of one of the patent applications filed in India on a breakthrough innovative product to treat Hepatitis C was on the grounds that while the claims may be both novel and inventive, they do not prove significant enhancement of ‘therapeutic’ efficacy and hence are not in line with Section 3(d).”

Will this stop US carping about India’s patent regime? Unlikely. At the review meeting, the US envoy was demanding that it be allowed to have its say in a new IP policy that India is reported to be finalising.

Order of the High Court of Delhi on infringement of copyright, rendition of accounts of profits, damages, cost and delivery up of infringing goods dated 13/09/2013