In the name of the farmer

Small cultivators will gain little from the Rs 575,000-crore credit largesse; companies and big farmers benefit the most 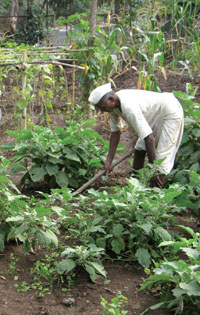 One should not look a gift horse in the mouth, specially when it looks like a powerful stallion that can run a long race. That’s what Finance Minister Pranab Mukherjee’s generous line of credit to farmers in this budget appears to be—a gift that can carry the country’s debt-ridden farmers over the worst humps of their risk-prone lives. Agricultural credit will now be a colossal Rs 575,000 crore for 2012-13, an increase of Rs 100,000 crore over the target set for the current year. As the minister noted sententiously, “Farmers need timely access to affordable credit.”

That they do, and Muhkerjee appears to be unusually sensitive to their needs since he had announced a similar increase in the last budget, too. In other words, an additional Rs 200,000 crore credit would be made available in just two years. But finance ministers are hard-headed men even if political compulsions appear to make them bleeding heart saviours of the needy. When Mukherjee talks of “farmers” who does he have in mind? After all there are classes and classes of farmers: the marginal, the small and the big. Or is he referring to the agricultural sector rather farmers per se?

The answers come from finding out who gets all this lovely money, this staggering amount of credit which is available at just four per cent interest in some cases. It does not appear to be the small cultivator and certainly not those in the killing fields of Vidarbha where a horrific number of farmers commit suicide year after year. In the agricultural quicksand of that region, farmers have gone under on account of a Rs 27,000 loan (see ‘Genocide of farmers’, Down To Earth, December 16-31, 2011). Who then is benefitting from this sea of credit?

To understand what is going on, we need to first look at the far-reaching changes in the definition of agricultural credit under priority sector lending (fixed at 18 per cent by the government). Broadly, new forms of commercial financing such as for export-oriented and capital-intensive agriculture have been added to this category, while at the same time the credit limit for existing forms of agricultural financing have increased. Even high-value loans given to companies for agriculture and allied activities in excess of one crore rupees in aggregate per borrower is considered priority sector lending.

The most illuminating analysis of these structural changes comes from Pallavi Chavan of the Reserve Bank of India (RBI) and R Ramakumar of the Tata Institute of Social Sciences who have been tracking the trends in agricultural credit taking place since the early 2000s. The big shift has occurred, they say, because a significant proportion of increased agricultural credit is met through indirect financing by commercial banks. This means that loans given to input dealers, irrigation equipment suppliers and non-banking financial companies that on-lend to agriculture also qualify as farm credit.

In a study published in 2007, Ramakumar and Chavan found that of the total increase in agricultural credit between 2000 and 2006, about one-third was contributed by indirect finance. So, “while direct finance grew at an annual rate of 17 per cent, indirect finance grew at an astonishing annual rate of 32.9 per cent.” Not surprisingly, the number of loans with a credit limit of Rs 10 crore and above, and particularly, Rs 25 crore plus have been increasing, the latter from 33 per cent in 2000 to about 54 per cent of the total indirect advances in 2006.

Simultaneously, there was a sharp decline in the small loans. Here’s what these two analysts found: advances with credit limit “less than Rs 25,000” and “between Rs 25,000 and Rs 2 lakh” had shrunk significantly—from 35.2 per cent in 2000 to 13.3 per cent in 2006. The small and marginal farmers were slowly being squeezed out even as big cultivators were gaining.

It is not as if the finance ministry is unaware of such trends. A few months ago, K C Chakrabarty, RBI deputy governor, had pointed out that the share of total agricultural credit supplied through rural branches has declined sharply, and more disturbingly, the share of urban and metropolitan branches in agricultural credit has shot up from 14.9 per cent to 33.7 per cent during this period. His worry: are the intended beneficiaries benefitting at all and where is the credit actually flowing to?

That’s a good question. In 2008, banks in Mumbai accounted for over 42 per cent of the agriculture credit disbursed in Maharashtra, a figure that could only have increased in the past three years.

It would be quite a stretch to argue that the small and marginal cultivator in the distant, dusty villages of Vidarbha gained from this pattern of lending. The only increase there has been is in death and despair. Clearly, Mukherjee’s largesse dictated by the UPA’s innovative definition of priority sector lending is doing little to alleviate the agrarian crisis.