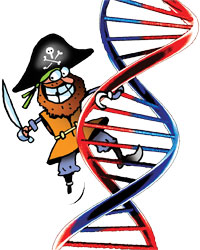 Ever heard of industry, and the developed world industry, mind you, saying that patents are not the best way of sharing knowledge? Well, here is what a spokesperson for the Biotechnology Industry Organization (BIO) said in July.

"Using IP (intellectual property) or the patent system to enforce compliance in the access and benefit sharing regime is a significant concern of biotech industries. There are other ways to address compliance issues than through the patent system, such as contracts and mutually agreed terms."

Wow! So the patent system is out and there are better ways to share IP? Before we get carried away, a little context to this singular statement. It was made by Lila Feisee, vice-president for global intellectual property policy at BIO, in Montreal where the Working Group on Access and Benefit-Sharing of the UN Convention on Biological Diversity (CBD) met.

Access and benefit-sharing (ABS) are about the way genetic resources— plant, animal or microorganism—are accessed in their countries of origin, and how the benefits that result from their use, either by private companies, research institutes or academic organisations, are shared with the people or countries that provide them. Montreal was yet another attempt to hammer out an agreement on "fair and equitable sharing of benefits arising from genetic resources", which is one of the three objectives of CBD.

This agreement has remained elusive for the past eight years, and this second meeting in Montreal was projected as a last-ditch effort to arrive at a pact before Conference of Parties to the CBD scheduled for October in Nagoya, Japan. Montreal was almost a washout since it did not finalise the draft protocol drawn up last March in Santiago de Cali (Colombia) as expected. Although the CBD secretariat has portrayed it as a success, it was anything but that. Another meeting has been called hurriedly before Nagoya. "In Montreal, we witnessed a major breakthrough in the negotiations. While much remains to be done, we are more confident than ever that the ABS protocol will be adopted in Nagoya," says the official statement.

Hope is, of course, vital if the 193 parties to CBD are to reach an agreement, but that optimism could be futile unless it is tempered by a clear look at what has been achieved by the week-long session in Montreal that ended on July 16. And take into account what an unnamed Japanese government delegate to the talks told Yomiuri Shimbun newspaper. "The cleavage in the modes of thinking between industrial and developing countries can hardly be narrowed, and it seems negotiations from now on will most likely be tough going."

The sticking point, say CBD watchers, is that industrialised countries—among these Japan, Canada, Australia and the world's largest trade bloc, the European Union—are giving primacy to the interest of private companies and not the global public good that is biodiversity. Essentially, the conflict is over how the countries of origin of biodiversity resources, majority of whom are in the developing world, should get a share of the profits arising from development of pharmaceutical, agricultural and other products made from their genetic resources.

Biotech enterprises in industrialised countries are using genetic information derived from animals, plants and microbes that are found in abundant diversity in developing countries. This has led to charges of biopiracy— the plunder of natural resources without sharing any of the big profits that accrue from such commercialisation (estimates of the market range from US $5 billion to $7 billion annually). And this is where the opening statement in this column becomes significant. Since the boot is on the other foot, patents should not be a hindrance to the development of new products.

As Feisee told Intellectual Property Watch, an online digest on major developments related to IP issues, "We will continue to reach out to delegations between now and Nagoya to ensure that whatever is agreed to ultimately will preserve innovation and R&D in the biotech space." It is important to understand who or what Feisee represents. BIO is the world's largest biotechnology organisation with over 1,200 members worldwide, many of them Fortune 500 multinationals— from Abbott, Astra Zeneca, Merck and Novartis in the pharma sector to Dow Chemicals and Monsanto in agricultural biotechnology.

So as the North and South continue to squabble, two points to ponder. One, the UN estimates that a third of all genetic resources for food and agriculture has already been lost in the past 100 years. Two, 2010 is the International Year of Biodiversity.