Monsoon makes some progress, keeps half of India waiting

With 45 per cent less rainfall recorded between June 1 and 18 and half of India still waiting for rains, monsoon continues to baffle one and all

The South-West Monsoon has advanced to the interior parts of India in the past one week after recovering from the “shock" of Tropical Storm Nanauk and fighting against the dry phase of Madden Julian Oscillation (MJO). The monsoon has now reached Maharashtra (excluding north western part), remaining parts of Karnataka, Telangana, Chhattisgarh, Odisha, Jharkhand, Bihar, Eastern Uttar Pradesh and Madhya Pradesh. 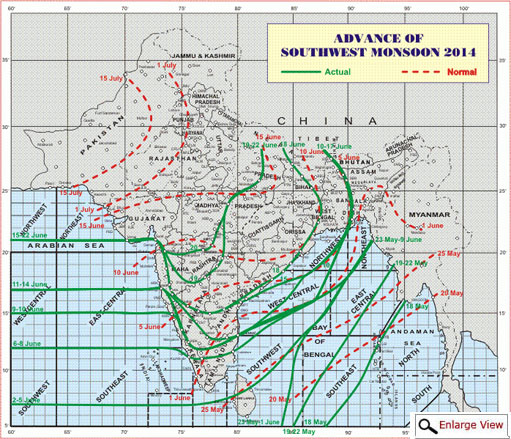 But despite the monsoon onset in these areas, rainfall scenario continues to worsen as the percentage of rainfall recorded continues to decrease week by week. Between June 1 and 11, 44 per cent less rainfall was recorded; this figure has risen to 45 per cent after taking into account rainfall from June 11 to 18.

One per cent too much
One might say that 1 per cent does not make much of a difference but it does in the case of rainfall. The number of meteorological subdivisions now reporting “deficient” rains has increased to 18 (out of a total of 36 divisions in India) from 11. Those reporting “excess” rains have decreased to just one from three—Andaman and Nicobar Islands has reported 32 per cent excess rainfall. During this same period last year, 26 subdivisions were reporting “excess” rains and only 1 was reporting “deficient” rains. The worst-hit areas today are Punjab, where along with summer like conditions 83 per cent less rainfall has been recorded, followed by eastern Gujarat- Daman, Dadra and Nagar Haveli (-78 per cent), Marathwada (-74 per cent) and Odisha (-71 per cent).

At the moment, a fresh western disturbance (low pressure system originating from the Mediterranean sea which brings rain and snow in north India) is providing some relief in north India and hence the maximum temperatures came down a little due to rains and cloudy weather.

New Delhi's Safdarjung area, which experienced non stop maximum temperature in the 42-43°C range recorded a maximum temperature of 40°C on Sunday; places in Punjab and Haryana also cooled down during the weekend. This present weather in north India shouldn’t be confused with the monsoon as monsoon is still far away from this region and continues to pass through Veraval (Gujarat), Nashik (Maharashtra), Sultanpur (Uttar Pradesh). Thunderstorms and rainfall have been continuing in the Northeast and eastern parts of India although rainfall deficiency continues in these areas. There has been a decrease in the rainfall in southern, central and western India also. Hence only the Bay of Bengal branch of the monsoon is actively providing rains now in the east and the Northeast.

What's in store
The dry phase of MJO is in full swing now and largely suppressing the rains from the Arabian Sea branch. This situation should be changing little before mid-July when the wet phase will take over the dry phase and boost the rains in India. It seems that the erratic nature of monsoon will be continuing this week also.

The effect due to western disturbance in north India will be over by Wednesday-Thursday and heating will be back because of which maximum temperatures will rise again above 40°C in the entire north India and Uttar Pradesh. Punjab will see maximum temperatures go up to 43°C. All eyes are now on the monsoon onset in these areas which won’t be a significant event as no heavy rainfall will be following the onset this month end. This will be identical to the recent monsoon onset in central India where immediately after IMD declared the onset on June 20, rains vanished. Hence it will be just an official formality of declaring the monsoon in north India as heavy and sufficient rains are still far away.

Same scenario will be witnessed in Rajasthan where monsoon onset is likely to move beyond July 1. In central India, the wait for sowing seeds will continue this week also as no sufficient rainfall is in sight, particularly in Marathwada where just 2 per cent sowing has been reported till now. There will be a decrease in the rains in eastern, southern and western India. Maximum temperatures will be rising further in central India and will cross 40°C again. On an average, maximum temperatures will be 35°C in Kolkata, 40°C in Chennai, 32°C in Bengaluru, 34°C in Mumbai, 41°C in Ahmedabad and about 42°C in New Delhi this week.

The first signs of a blow to agriculture and related finance are now showing because of delay in sowing of seeds and weak rainfall.