Monsoon is progressing as expected only over some parts of India; 44% less rainfall recorded between June 1 and 11

Monsoon is progressing as expected only in some parts over India; 44 per cent less rainfall recorded between June 1 and 11

The controller of India’s agriculture—the South-West Monsoon—finally marked its arrival in Mumbai on Sunday, June 15, and has now covered the entire western coast of India, excluding western Gujarat.

After a before-time entry in Andaman & Nicobar Islands around May 18,  monsoon got stranded just short of Sri Lanka for some days. Due to the splitting of the monsoon winds in southern part of Indian peninsula, two independently working branches of monsoon are formed—the Bay of Bengal branch (provides rainfall in the north-eastern and eastern states of India) and the Arabian branch (provides the rainfall in the other parts of India, like western, central and southern). When the monsoon was stranded near Sri Lanka, a part of it was also progressing rapidly towards the north-eastern states. In fact, it was the Arabian Sea branch of the monsoon which was stranded, but the Bay of Bengal branch progressed almost on time.

Monsoon was just unpacking its bags after its arrival in most of the parts of Kerala and Tamil Nadu from June 6 to 8 when a new guest arrived on June 9 in east-central Arabian Sea, offshore of Karnataka and Goa, which was tropical storm, Nanauk.

Referred as “Cyclone Nanauk” in layman’s language, the storm severely impacted the Arabian Sea branch. It initially headed north-east towards India and then north-west till it died away on June 13 and literally pulled the monsoon along the western coast of India. (Remember, such systems have a lower pressure as compared to surroundings and to balance it, they pull the surrounding air). Its path put a speed breaker in the monsoon's progress in the interiors. Hence monsoon still hasn’t arrived in north-east Karnataka, Telangana and the states north of them, despite reaching southern Gujarat at the western end. The Bay of Bengal branch reached the north-eastern states of India and Sikkim after a slight delay and is still expected in eastern India. Hence the upper geographical limit of the monsoon now passes from Surat in Gujarat, Bellary in Karnataka, Cooch Behar in West Bengal and Gangtok in Sikkim. 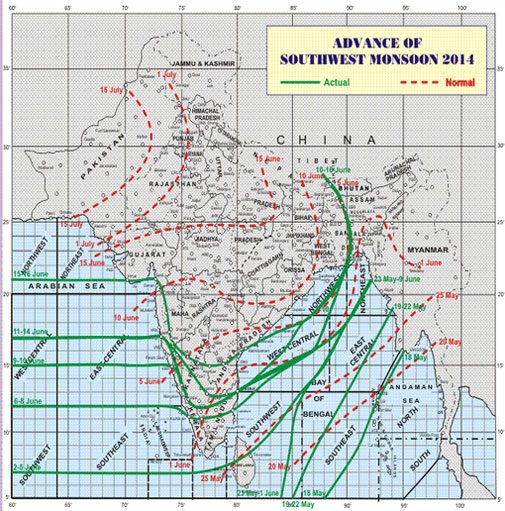 Forty-four per cent less rainfall has been recorded in India, according to India Meteorological Department, between June 1 and 11 this year. Eighteen out of 36 meteorological divisions of India reported scanty rains,10 subdivisions reported deficient rains and only three subdivisions—the ones in Tamil Nadu-Pondicheery, Rayalaseema and Sikkim-northern West Bengal have reported excess, in contrast to 2013 monsoon when during this same period, just three subdivisions had reported scanty rains, three reported deficient rains and 25 subdivisions reported excess rains.

As Nanauk has died out, the Arabian sea branch will now be trying to gain momentum again and try to cover the interior parts, but thanks to Madden-Julian Oscillation (MJO) it may face more problems. MJO is a linkage between the circulations (movement of air) in the atmosphere and transport of energy by convection method (in which the particles of the medium like air transport energy). Having two phases—one suppressing and the other boosting the rains, this linkage travels west to east in the atmosphere and is observed over the Indian, Atlantic and Pacific Oceans, and thereby modulates the rains in India.

When this dry phase of MJO is over India, a decrease in the rainfall is seen whereas rains increase in a wet phase. As per the Climate Prediction Centre of National Oceanic Atmospheric Administration (NOAA), US, which monitors MJO, a dry phase will be arriving over India now and will be active till about July 5 and it seems that its primary impact will be on the Arabian Sea branch. Hence good but severe thunderstorm rainfall should be continuing (due to the Bay of Bengal branch) in the Northeast and eastern states in this period, especially Sikkim on June 20 and 21. Travellers should take precaution to avoid possibilities of landslides in Sikkim and the north-eastern states. At the same time, sufficient rains for sowing the seeds wouldn’t be happening in this week in crucial parts like central India and farmers should wait for sowing.

Hot, slightly humid and uncomfortable conditions will continue in Delhi and the plains of north India, like Punjab, Haryana, Chandigarh, with the monsoon arriving silently not before the end of this month. Maximum temperatures should rise to around 42°C in Delhi this week.