Cyclones and the threat to delta population 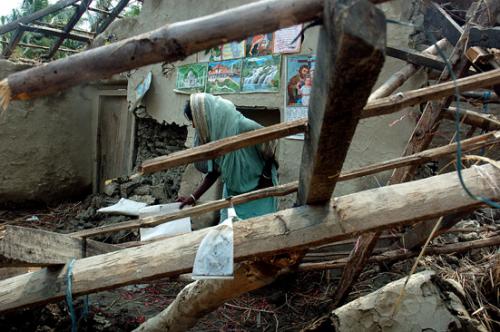 India and Bangladesh are increasingly facing the wrath of nature with more frequent occurrences of cyclonic storms and coastal floods.

During each of these events there has been huge loss of lives, livestock and household assets giving rise to long-term after-effects such as debt burden, forced migration and women trafficking.

Added to this long list of misery is the salinisation of agricultural fields, making them unsuitable for growing crops.

Are mitigation and adaptation measures adequate?

Project reports and action plans focusing on the need to combat the effects of climate change through the process of mitigation and adaptation are pouring in.

In India, a National Action Plan on Climate Change (NAPCC, 2008 and 2014) with 12 mission mode action can be viewed followed by the impressive State Level Action Plan for every state.

But during every disaster, the panic button is pressed. The Disaster Management Act, 2005 and the National Disaster Management Authority failed to prevent loss of life in Andhra Pradesh during cyclone Roanu and many more such incidents had occurred in the past after 2005.

In Bangladesh, the number of deaths touched 24 during Roanu. Loss of human lives has now become a number game in the media.

In reality, the message of action has not been able to translate into real action. Policy makers and implementing agencies speak in different languages and so does the finance ministry which holds the purse strings.

Even there is no separate reporting system from the NAPCC authority and the Government of India on the progress except for the part included in the annual report of the environment ministry.

The Centre seems to be focusing more on long-term benefits that will be derived from adopting mitigation measures like extensive plan for renewable energy and promoting energy efficiency than addressing the immediate need of putting equal importance on measures targeted for implementing adaptation programmes.

It will be interesting to find out what exactly are the barriers to the implementation of the adaptation programme for which at least five dedicated missions have been announced at the national level.

India has set up a National Adaptation Fund, but the budget allocated seems to be too little. Meanwhile, the coastal population, especially in the most-vulnerable delta regions, continues to face uncertainty with every warning of cyclone and storm surge during the coming monsoon.