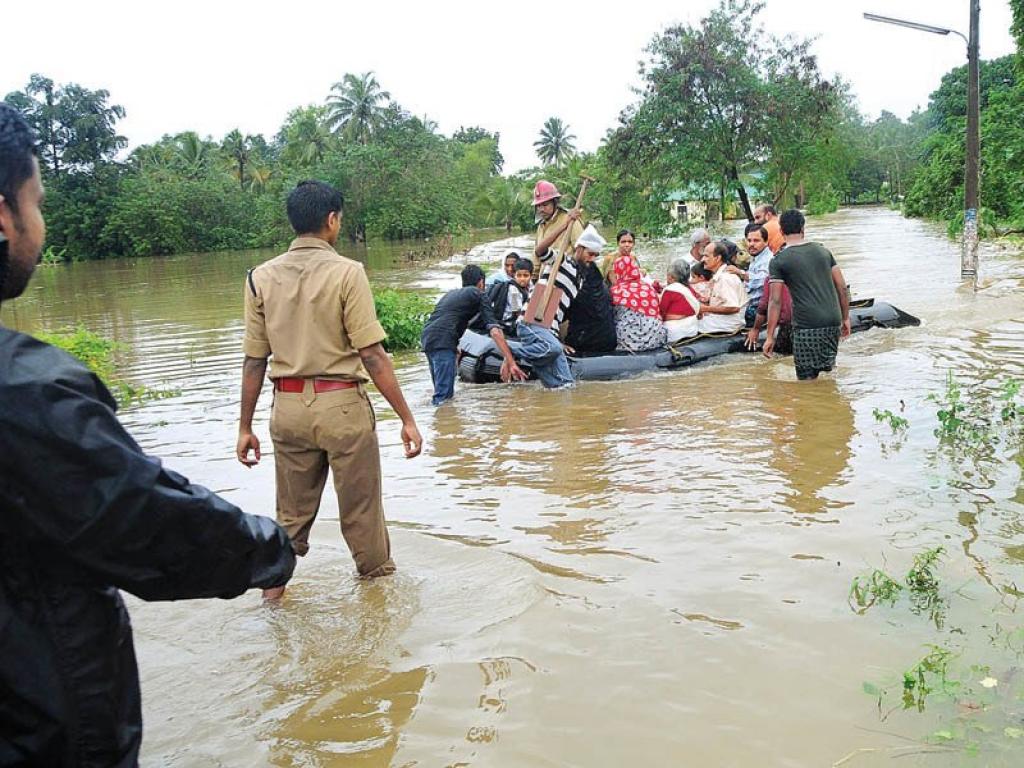 Ten days of incessant downpour turned Kerala into a theatre of destruction. A total of 483 deaths, thousands of homes inundated, over a million and a half people in relief camps, roads and the major airport flooded and damaged—an unparalleled tragedy in the history of the state renowned for its high social indices and progressive political ambience. The Kerala deluge is a human-made calamity predicted by the Intergovernmental Panel on Climate Change (IPCC) in its 2007 report.

As predicted by the IPCC, the number of rainy days were less and the volume of precipitation far greater than the normal average. Uninterrupted rains lashed most of the 38,852 sq km broad state from August 9 to 15, which was over 257 per cent of the normal rainfall this period in the past years. And this unending rain was falling on a soil that was already soaked by rains that started on June 1, which was already in excess of the normal by 41 per cent.  The carrying capacities of the water bodies to hold the run-off water were also exhausted. The irrigation and hydel dams on the Western Ghats hill range bordering the eastern part the state were already getting to their peak storage capacity.

The rain on August 15 was an unbearable 130 mm against the 10 mm average of the previous years on the same day. What followed was a tragedy of unprecedented scale—floods across the state and landslides in the highland areas. Deaths and destruction as never seen before in this part of the world. Kerala has the memory of a 1924 flood that was calamitous but the present one surpasses that in the scale of the havoc. Enjoying moderate climate, Kerala was unprepared to face the challenge of the deluge in the making of which it barely had any role.

Was it due to the loss of forests? Kerala has a forest and tree cover of 23,280 sqkms which is 60 per cent of the terrestrial area of the state, in comparison with the 21.54 per cent forest coverage of India, as recorded by the latest report on forests in the country by the Forest Survey of India in 2017. It also reports a net gain in forest coverage by 1,043 sq km in Kerala during the reporting period, though this is attributed to the increase in commercial plantations. As for the water bodies in the forest districts, the state expanded its spread by 71 sq km during the decade of 2005-15, the report reveals. Obviously, the local environmental factors hardly had any influence in the making of the tragedy. There are cases of stone mining in some parts of the state, which I have also been opposing at a few locales, but that cannot be attributed to the deluge as some tend to argue. The sheer volume of the precipitation inundated the entire landscape, and wrought landslides in the hills. Global warming operates as an invisible process and one can miss it and get engaged with local factors digressing from the central issue.

The damages wrecked by the deluge are astronomical. Tentative estimates put the figure at Rs 200,000 million (about US$3 billion). The flood mortality was kept to the minimum by the dedication and unity of the people in rescue and relief operations. The coastal fishermen took their boats on elevated trucks to the inundated areas and rescued about 100,000 people marooned on rooftops. The army too played a commendable role although the scale of deployment of their logistics was disproportionate to the scale of the disaster. The people showed remarkable solidarity and sense of sharing in helping the affected in the relief camps spread across schools, public halls, churches, mosques and temples. The greatest ever tragedy in the state also witnessed a great display of human solidarity.

The IPCC had predicted the change of floods of 100 years cycles to 4-5 years. With the atmosphere having over 400 parts per million warming gases, the highest ever in the past three million years, this prediction is set to become a reality. And the Kerala deluge is one more proof. Half of the 48 million people exposed to river flooding are in Asia and this is set to increase with the growing incidents of floods. The losses from floods across the world are set to escalate from the current staggering figure of Euro 110 billion per year. And the victims have barely any role in the making of this tragedy. According to a World Bank study of 2013, the US per capita emission was 16.4 metric tonnes while India’s was only 1.6 metric tonnes. All developing countries have similar or even lower rates of carbon emission than India. And this is not considering the disproportionately huge levels of carbon emission by the US in the past, and the same is the case with other industrial economies as well. Yet the Paris Agreement is inherently weak in reversing the climate change and the US is seeking to sabotage even that.

This is a debilitating blow to Kerala’s economic order that spends heavily on education, has a renowned primary health care system and an egalitarian social profile. Yet, the relief assistance from the Central government has been meagre in comparison to the scale of damage.
Rs 6,000 million have been offered when the devastation is to the tune of Rs 200,000 million. This figure is not exactly because of a scarcity of funds as far more amounts have been spent by the current regime on items such as personal publicity for the Prime Minister, statue making, aid for asingle religious festival and so on. This discrimination is perceived asdue to the progressive politics and syncretism that characterise the Kerala society, in contrast to the xenophobic and fundamentalist politics of the political formation at the Centre.

It was a tragedy within a tragedy that people belonging to the ruling political formation went on calling on people not to donate money to the relief fund set up by the Kerala Chief Minister, describing the Kerala tragedy as a divine punishment for eating beef, for disrespecting a certain deity and so on, and stooped to the level of a TV anchor close to the Prime Minister disparaging,on air, the people of rain-ravaged Kerala. A Central minister, interestingly hailing from Kerala, publicly stated that all that the battered state needed was only plumbers and electricians. An unprecedented tragedy followed by unheard-of campaigns, reflecting the new xenophobic political ambience in the country. And the Central government diplomatically denied any UN support to the flood-affected people. The United Arab Emirates (UAE) government was contemplating to provide an unconditional grant of US$ one million, but that was rejected by the federal government even when India is a leading recipient of foreign assistance from multiple countries and multilateral banks. India is encumbered with a staggering debt of
Rs 460,000 million to foreign countries and multilateral agencies during 2017-18, according to the Union Ministry of Finance. And India paid back Rs 57,680 million to foreign donors in interest alone during the same period! But foreign assistance for the helplessly sinking state was denied, even as the federal government itself is declining to contribute to Kerala matching its massive financial need for rehabilitation. Denial of the UAE aid offer came, intriguingly, after the Prime Minister’s tweet welcoming the support of the UAE.

The global community, the developed countries in particular, has a responsibility not to let Kerala sink as it is reeling under the onslaught of global warming in the creation of which it has little role. And this should be based on the principles of polluter pays and common but differential responsibility enshrined in international law. With the UN Framework Convention on Climate Change projecting the level of carbon dioxide in the atmosphere the lethal 55 gigatonnes in the year 2030, it is important for the global South to see how the world responds to the onslaught of global warming in Kerala.