When havoc descended upon Chennai

Down To Earth journalist Rajeshwari Ganesan writes about the uncertainty of knowing if your loved ones are safe, even as Chennai's flood worsens 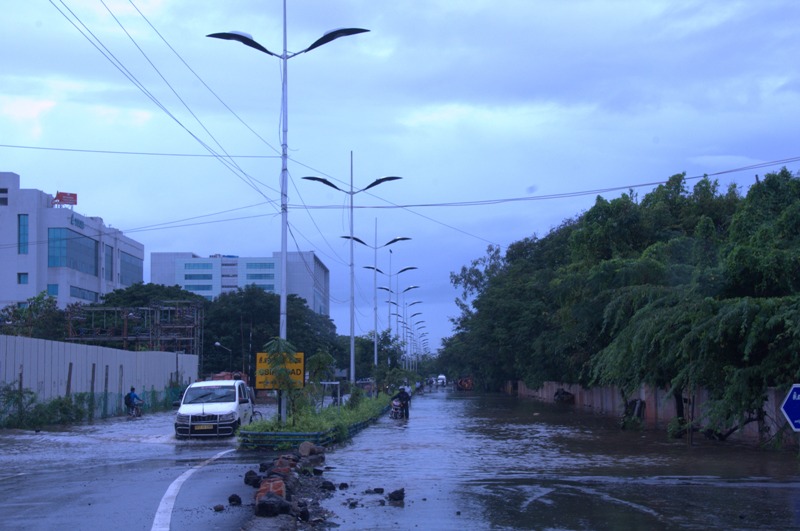 It has been a harrowing time for the families of those stuck in Chennai floods. Since Thursday morning, no channel of communication could be established with stranded relatives and friends.

My nonagenarian grandmother had been hospitalised for acute dehydration owing to diarrhoea when overflowing sewage water mixed with the drinking water. While she did manage to get to hospital, my relatives had a terrible time trying to reach the hospital to help her out. Hospital authorities discharged her as all medical facilities have been diverted to pregnant women and critical cases. Meanwhile, her ground floor apartment is inundated.

My mother, who was supposed to leave from Delhi on Wednesday to help my grandmother, had to cancel her tickets as trains are being diverted or have been delayed by days.

Wednesday brought grim news. At 9:10 am, a friend called to tell me that another friend’s father had passed away earlier that day. The man had suffered a massive heart attack and there was no mode of transportation available to get him to hospital on time. Their helplessness was ironic because the father used to himself drive the sick to hospital until recently as a service to them.

“In fact, there is no way to even get the body to the nearest crematorium. The dead body is at home and the friends and relatives have not been able to reach the house five hours since the death,” my friend informed me. As of Wednesday evening, they had still not been able to cremate the body.

With the runway in Chennai’s Meenambakkam airport being in knee-deep water, my husband had to cancel his air tickets to Chennai. He was to attend a friend’s wedding, but with the current scenario, there is a question mark on whether the wedding will happen at all.

My in-laws, who also live in Chennai, tell me that there are no provisions available. The Old Mahabalipuram Road, an arterial road in the newer part of Chennai, is blocked because the road connecting it to the main city has caved in. Their niece, who lives on the same road, is unable to reach their place and is stranded in her hostel with barely enough food. The phones are now switched off.

The channels of communication, even in case of an emergency, are no longer available to some. A friend asked me not to worry if his phone were switched off as there has been no power in their area for more than two days. They have no way of reaching anyone as they are unable to recharge their mobile phones. The landlines are dead. While telecom operators have offered many freebies to help those stranded, they may not be of much help as the phone lines are down.

This friend also told me that when he went to the washroom one day, there was snake in the commode. It was perhaps trying to find a dryer spot away from the flooded streets.

I was born and raised in Delhi but Chennai is more than home to me. While heavy rains are expected and considered normal around Deepawali, the magnitude is far worse this year. In fact, the merciless downpour has been termed as the heaviest in over 100 years. Television channels are now showing visuals of a torrential Adyar river, whose waters have spilled over onto Saidapet Bridge. Since the first phase of heavy rains in November, the administration has been continuously discharging water from the Chembarambakkam drinking water reservoir into the Adyar, owing to heavy rain in the catchment areas. This is causing the river to swell. With a gap of a week between the first and second phase of the torrential downpour and adequate forecasts about more rains, one wonders if the administration should have planned and prepared itself in time and released more water before the latest spell so as to accommodate for the flow. Could the inept water management be a reason among many others for the current disaster?

With the Chennai collector issuing a flood warning and the Centre recently releasing Rs 900 crore for flood relief, one would have thought that there is some respite in sight. However, highly-placed sources in the state government say that “at least Rs 500 crore of the funds accorded by the Centre have been pending because of ‘unfair devolution’ by the 14th Finance Commission; the rest has been pending for the last two years".

Social media is playing a constructive role in helping people plead for rescue or relief. It is also heartening to note that help is pouring in with common citizens offering shelter, food, medical aid and other assistance, on social media. After I shared my grandmother’s condition on a popular social networking site, it travelled from one friend to another, all the way to Sharjah and back, until someone I knew saw the post and reached out to my grandmother.

Difficulties in contacting one another remain though. A relative in Chennai informed that emergency numbers listed by people are not responsive. “The automated voice welcomes you, puts you on hold, says everybody is busy and then the line snaps. To top it all, there is no electricity. Can't they have more people in such an emergency call centre and a system to record the complaint and attend to it,” he asks.

While many people have been able to mark themselves safe on social media, there are thousands more with no access to any mode of communication. Their whereabouts and safety remain unknown.