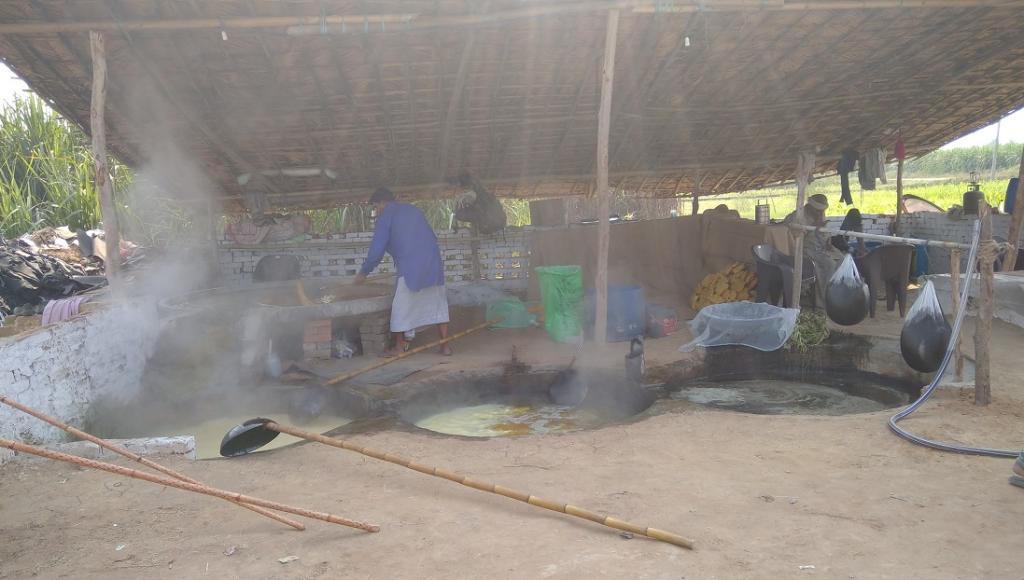 The Industrial Pollution team of the Centre for Science and Environment (CSE) visited Muzaffarnagar in western Uttar Pradesh October 12, 2020. During the visit, we sighted a number of kolhus (jaggery-making units or mills) located on the agricultural land along the highway.

We found thick smoke being emitted from the units. This was easily visible even from a distance. We visited one of the units and observed the setup and operating conditions. We found the unit was using plastic and rubber apart from agricultural waste as fuel.

The CSE team tried to find out whether there was any kolhu in the area that operated with better, less pollution-causing technology. We contacted Digvijay Singh, the owner of a kolhu.

He informed us that every farmer who grew sugarcane, usually set up a kolhu on his farm. The cost for setting up a conventional kolhu is about Rs 4 lakh. A kolhu operates anywhere between 12 and 18 hours in a day, one operator told us. 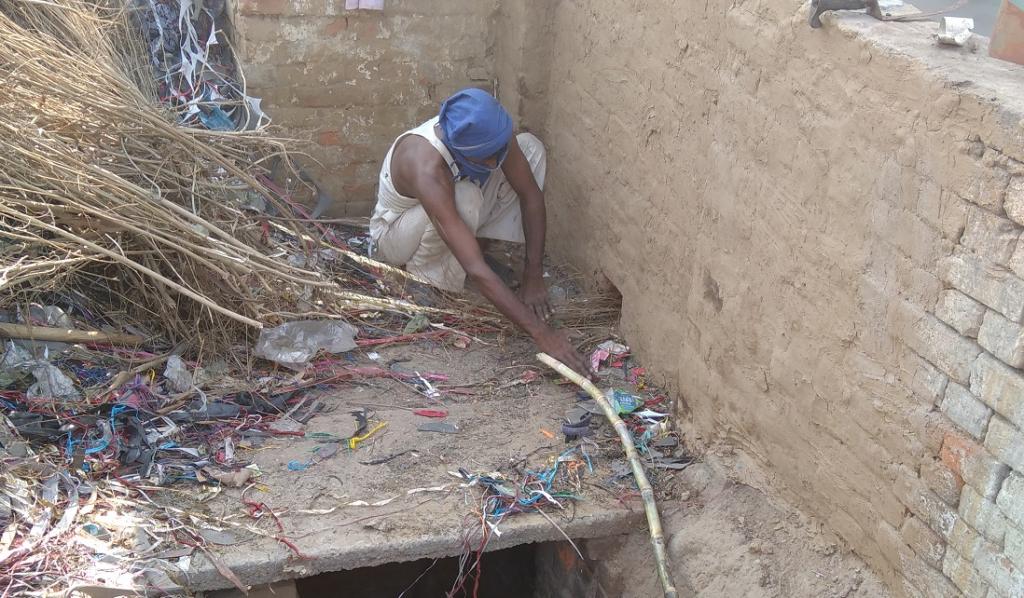 Rubber and plastic being used in the furnace of a 'kolhu' in Muzaffarnagar. Photo: Shobhit Srivastava / CSE

The operator added that about 15,000 kilograms of sugarcane, alongwith 1,500 kg of fuel were required to manufacture about 2,000 kg of jaggery.

There are about 800 kolhus operating across Muzaffarnagar district, providing employment to thousands of seasonal workers. It is, therefore, necessary to monitor and control the emissions either through pollution-control measures or by using better technology options. 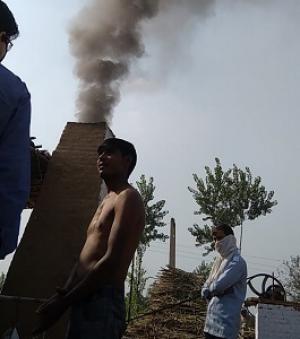 All kolhus usually used the same technology, of threshing cane, extracting the juice and then boiling it in furnaces, we were told. However, there was one advanced technology available in the market wherein the furnace could be operated by electricity instead of fuel.

The major drawback of this technology was cost, which went up high as Rs one crore. The emissions would be low in an electric furnace setup, but the return on investment would be too high for the kolhu operator, considering that jaggery is produced seasonally.

To add to it all, no pollution-control devices are installed in kolhus. The particulate matter emission limit for kolhus is 500 milligrams per cubic metre, according to the guidelines of the Central Pollution Control Board (CPCB). However, in the absence of infrastructure (port holes, proper platforms on chimneys), emission monitoring is not possible in a majority of the units.

CPCB did publish a Comprehensive Industry Document in August 2018, with an overview of jaggery-making units such as kolhus. This included the process of making jaggery, the pollution potential of the units and the guidelines for pollution-control.

It is not just kolhus but the whole of the Micro, Small and Medium Enterprises (MSME) and unorganised sectors that need handholding in order to improve their efficiency and become environmentally sustainable.

If these sectors are not provided with low-cost options to control pollution and improve their efficiency or performance, it would not be possible for them to flourish. Ultimately, the sectors will go into heavy loss.

Therefore, regular, simple, indigenous and non-expensive technology is the need of the hour. It is important to reduce and control the pollution emanating from these jaggery units and all other MSME units. More sustainable and advanced technology options should be explored and environment performance should be improved.

Jaggery units are a source of employment for a significant number of seasonal workers. Their end product also has demand in the market. Therefore, it is utmost important that in the long-run, the industry should flourish more, with lesser impact on the environment.

Shobhit Srivastava is a Programme Officer with the Industrial Pollution of the Centre for Science and Environment, New Delhi