Lithium extraction should be sustainable

In our efforts to make the planet cleaner, we cannot repeat the mistakes we made with fossil fuels

Air quality has been drastically deteriorating in most parts of the world. While there are multiple contributing factors, emissions from energy production and vehicular emissions continue to be the primary pollutants.

The solution seems simple — move the electricity grid to renewables, and replace private gas guzzlers with electric vehicles (EVs). The key to both of these? Batteries. This is where things get complicated.

Regions witnessing large scale mining have reported sparkling night skies, with dust that settles on their fields and enters their rivers. These stardust-like particles are graphite, a component in Lithium-ion (Li-ion) batteries.

While lithium (increasingly referred to as ‘white gold’) is the key component, Li-ion batteries also contain graphite, nickel and cobalt, all of which have lengthy extraction processes. Li-ion batteries are used in a variety of products — from smartphones and electronics to EVs — and most recently as power back-ups battery for regions facing power cuts. While standard automobiles compete on the quality of their engines, the fate of EVs will be decided by batteries.

Lithium is sourced mainly from salt brine and spodumene (hard rock), of which South America and Australia respectively, have the largest reserves. In spite of South American brine having made headlines over the last few years, it is actually Australia that has greatly increased supply. Lithium supply is set to triple by 2025, but is it a genuinely ‘clean’ solution?

In 2018, more than 5.1 million electric cars were on the roads globally, up two million from the previous year, according to the International Energy Agency’s Global EV Outlook 2019. The number of new electric car sales had almost doubled. China continues as the largest market for EVs, with the United States in second place.

Much of the growth in battery technology has been driven by the private sector, with companies like Tesla Inc, Nissan Motor Co, Ltd and Samsung Group expanding their operations across the globe, and registering record sales figures. In 2017, when the state of South Australia faced severe power cuts due to a storm, Tesla chief executive Elon Musk took up the challenge of creating a battery to provide an electricity back-up to the whole state within seconds.

Tesla succeeded, creating a narrative around battery technology which the rest of the private sector is likely to try and emulate. The building of momentum around batteries raises the question — what do we do when the market demands millions of batteries at once, without any plans for their second life?

To avoid the disastrous situation of them ending up as hazardous waste, the cost of recycling (or repurposing) lithium needs to be optimised. For example, batteries from EVs could be recycled and used in smaller appliances, drastically increasing the battery’s lifecycle.

It is currently five times costlier to re-purpose lithium than to mine new stocks. However, although sales of second-life batteries may lag behind EV sales, it is likely to catch up by 2030, as the graphic below shows. 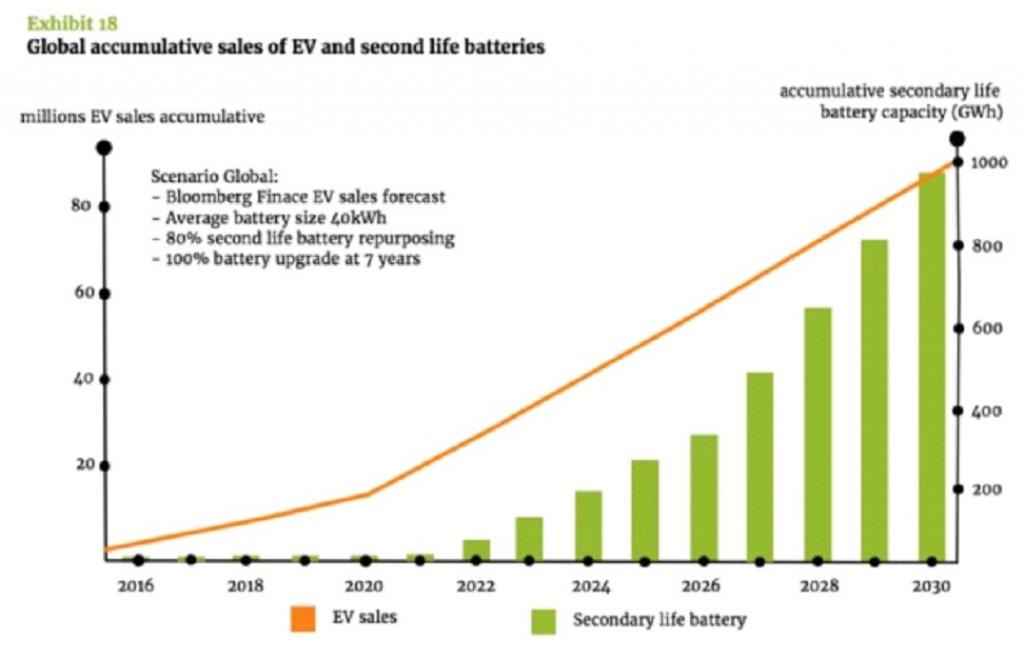 Deposits of lithium are located near some of the most sensitive ecosystems in the world. The Amur River, on the border of Russia and China, the Andes Mountains (Chile) and the Salt Flats in Bolivia, together account for most of the planet’s stocks.

In 2016, a toxic chemical leak from Ganzizhou Rongda Lithium mine in Upper Tibet led to the complete destruction of the surrounding ecology and thousands of dead fish were found washed up on the banks of the Liqi River.

There have been various documentations of graphite dust covered crop fields along the China-Russia border, with farmers being forced to stop cultivating their fields. The chemical discharge from the factories also leak into water sources, making not just the water undrinkable but also making its way into the food chain through animals like ducks and fish.

These concerns are amplified by studies comparing the life-cycle costs of electric vehicles and vehicles powered by internal combustion engines (ICEs). A study by researchers in China, for example, found that carbon dioxide emissions during the life cycle of EV production to be 59 to 60 per cent more polluting than emissions from the production of ICE vehicles.

The lithium assessed in that study was extracted according to Chinese standards, and the researchers highlighted that using American or European techniques would be more optimal. The study also suggests that, since EVs use more aluminium and steel which increase CO2 emissions through their own mining processes, using recycled materials over virgin materials would be far more sustainable.

It is important to remember that these technical concerns are playing out in a political context. Lithium reserves were reportedly central to the coup against Evo Morales, the now-former Bolivian president. A right-wing party is set to win the elections in May this year; it remains to be seen if they will open up Bolivia’s lithium reserves for extraction by industry.

If lithium is not extracted and used sustainably, we would simply end up transferring climate pollution to the air, soil and water. In our efforts to make the planet cleaner, we cannot repeat the mistakes we made with fossil fuels.