Indian cities are being engulfed by vehicular pollution. Under such circumstances, the electric autorickshaw and bicycle offer some respite 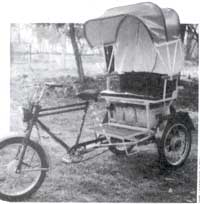 INDIAN cities are among the most polluted in the world. Delhi has already been slotted among the top-most polluted cities of the world. The main source of the air and noise pollution ailing the metros are petrol-powered two and three wheelers. There are close to 18 million petrol-powered two wheelers and about 1.5 million petrol and diesel-powered three wheelers in the country and their numbers are rising at the rate of 15 per cent per annum. Besides being a major health hazard, these vehicles are guzzling huge amounts of petrol and diesel for which the country has to pay dearly in foreign exchange.

Under the present circumstances, the electric cycle rickshaw stands out as a non-polluting and silent form of transport which is suitable for urban areas. Work done at the Nimbkar Agricultural Research Institute (NARI) at Phaltan, Maharashtra, has shown that improved cycle rickshaws, powered by electric motors and batteries, have the potential to provide an attractive alternative to petrol and diesel-powered three wheelers.
An estimated one million rickshaws ply on Indian roads carrying about three to four billion passengers per kilometre (km) every year. In some cities, cycle rickshaws are one of the major means -of transport. They provide employment to about 70,000 people, are very maneuverable and are non-polluting. Therefore, the policies being pursued by the authorities concerned in most towns to phase out these rickshaws is very unfortunate. These non-polluting vehicles are being replaced by highly polluting and noisy petrol and diesel-powered three wheelers. A study by NARI shows that three wheeler diesel tempos in Lucknow produce close to 70-80 decibels of sound at a distance of one-two metres, besides emitting huge amounts of toxic particles into the air.

But even the existing cycle rickshaws are not in a particularly good condition. The poor design takes a heavy toll on the health of the rickshaw-puller. The rickshaw has hardly changed since it was first introduced in India in the 1930s and 1940s. The gearing and the mechanical advantage of the pedal are very poor. Hence, the rickshaw-puller has to exert a lot of energy even while climbing a slight slope. The braking system is also obsolete. There are only front brakes in a rickshaw hence, while going downhill at a high speed, braking produces a catapult effect. Similarly, the seating arrangement is very uncomfortable.

Rickshaw manufacturing is conducted in the unorganised small sector without quality controls. Designs vary with the city in which they ply. There is a need to improve the existing rickshaws and ensure quality control in their manufacture, especially since electric rickshaws could provide dignity to the rickshaw-pullers, who are at present treated as members of the lowest rung of society. Moreover, electric rickshaws can also increase the income of the rickshaw-puller as he can ply his vehicle for greater distances in one day.

Even petrol-powered two wheelers can be replaced with pedal-assisted electric bicycles. In 1997, Japanese companies Honda and Yamaha sold 200,000 such bicycles. These bicycles give a mileage of about 30-40 km at a speed of 20-25 km/hr in one charge. However, the cost of the electric bicycle is us $1,500 which is prohibitive for India.
• The government should make it mandatory that in congested areas in big cities only electric rickshaws, improved models of existing ones or bicycles should ply. Parking facilities should be made for these modes of transport. This decision may also spur new research and manufacturing of such rickshaws. A similar policy decision by the state of California, us, has forced the Detroit automakers to start manufacturing electric cars.

• More research is required to develop better and more efficient electric motors. Importing battery and motor technology could enhance the introduction of electric rickshaws in India.

• Loan facilities at easy interest rates should be made available to the buyers.

Making a policy decision on the introduction of electric rickshaws and bicycles by the government would be a concrete step towards making a greener and healthier India.