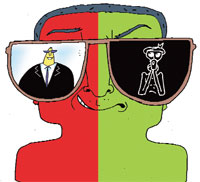 So we all know with far greater certainty what we have always known: money and influence—not one without the other—can buy businessmen all that they desire. Dream policies to suit just about every commercial interest, crooked ministers who will tweak them further in case of need, a compliant media that is hardly distinguishable from the fawning public relations outfits and lobbyists who are more powerful than the whole gaggle of EGOMs, or empowered groups of ministers, put together.

Have the disgraceful disclosures of wheeling and dealing in the 2G spectrum scandal involving our iconic companies and the Krishna-Godavari Basin gas dispute between the country’s richest sibling tycoons shaken the country? Not really. We are such a cynical nation that it’s hard to shock us; if anything, we are amused by some of the revelations. Who would have guessed the globally famous Ratan Tata would be discussing designer gowns with public relations diva Niira Radia? True, there are some convulsions in the pile-carpeted corridors of power in Delhi as sanctimonious industry groups and pillars of the pink press scurry for cover, but, by and large, non-metropolitan India couldn’t care less about their shenanigans.

The lives of rural Indians, specially those of farmers, are far removed from the concerns of Delhi’s wheeler dealers, except in one respect. They know full well that the power elite, an unholy alliance of politicians, bureaucrats and corporate lobbies, are happily selling them down the river while an indifferent government abets the process through a series of predatory laws waiting to be enacted. In the guise of bringing technology to farmers, giant seed and pesticides companies from Europe and the US are being allowed to dig their talons deeper into the country’s vulnerable agriculture sector.

What if anything should concern the farmers and their champions in the reams of taped conversations that have been submitted as evidence in the 2G case by Supreme Court lawyer Prashant Bhushan? Just one sentence. This is the declaration allegedly made to one of Delhi’s political fixers by Mukesh Ambani, the country’s top industrialist and one of the wealthiest men in the world: “Ab toh Congress apni dukaan hai” (the Congress is now our shop). His, clearly, is not the only such claim that can be made about the UPA government, or whichever party is in power.

India has undoubtedly evolved into an oligarchy, a society in which the political clout of major corporations is stifling the country’s long-term growth prospects by distorting its policy design. This is something Raghuram Rajan, economic adviser to the prime minister, has been warning us about. India, he says, is vulnerable because parts of the state are extremely susceptible to influence.

Given the way so many of the UPA government’s policies are being formulated, it is clearly evident that the country is being opened up to business interests in a systematic way. And the farming community, in particular, has become the target of some of the most predatory policies that are being enacted by the Manmohan Singh government. We have the Seed Bill, the Pesticide Management Bill, the Protection and Utilisation of Public Funded Intellectual Property Bill, all of which expose the farmer and his livelihood to the depredations of the corporations.

The mainstream media is certainly not interested in the plight of the farmer never mind that close to 200,000 have taken their own lives in the last 13 years. Farmers, to them, are part of a bleak rural scenario which seldom engages their imagination even if Peepli Live was such a hit in the metros. That’s why a caravan of farmers making their way across the length and breadth of India has received little attention in the national press. Calling itself the Kisan Swaraj Yatra (Farmer’s journey for freedom), the band of somewhat battered but fiercely hopeful campaigners whom I met in Orissa’s Koraput district two weeks ago, have crisscrossed a dozen states, rallying farmers and politicians to their cause. By the time they end their 75-day trip across the country on December 11, the doughty warriors would have taken their message to 20 states.

What are the farmers seeking? They believe that India’s agriculture is at a critical juncture, a point at which a hard choice has to be made. Either we follow the disastrous model of industrial farming that is practised in the West—inputheavy, highly mechanised, and unsustainable because it survives on huge handouts—or we choose our own path. In the latter, farmers would have the right over seeds, land and water. Their seed diversity and traditional practices would be protected as part of a low-cost, environmentally sound set of practices that allow small farmers to live with dignity.

It is a debate that policymakers, officialdom and the media has to join, and in a meaningful manner.