Is the Ganga basin drowning in shit?

Forty-three per cent of India’s population resides in the Ganga basin. Hence, it is imperative to rejuvenate the river. The Ganga, though, is getting polluted and drier with each passing day.

According to the latest Central Pollution Control Board Report of 2018, 151 priority drains (those with more than 1 million litres per day or MLD, of flow), flow into the main stem the Ganga.

They discharge more than 10,500 MLD of polluted water with BOD (Biochemical oxygen demand) load ranging from 350 to 430 tonnes per day (TPD) which is equivalent to more than a crore people directly defecating in the river.

According to an estimate of the United Nations, 80 per cent of the wastewater that is discharged in the two major tributaries of the Ganga is untreated.

Efforts to clean the sacred river started in 1986, with the advent of Ganga Action Plan (GAP)-I. Since then, the government has tried various measures.

GAP-I was followed by Yamuna Action Plan (YAP)- I & II, GAP-II, Gomti Action Plan and others. But nothing seems to have worked.

The same is true for Namami Gange, the flagship programme of the government, launched in 2015 with a budget of more than Rs 20,000 crore, and a target to achieve a Nirmal (clean) and Aviral (flowing) Ganga by 2020 (which was 2019 earlier).

There are many reasons as to why pollution has not abated and minimum flow in the river not restored. But municipal waste water flowing into the river has been considered as one of the main culprits.

The National Mission for Clean Ganga (NMCG), the implementing body of Namami Gange, has identified 97 priority towns along the main stem of the river Ganga, and has sanctioned most of the projects in these select towns.

It is not rocket science to understand that rejuvenation would not happen till all the tributaries also get similar attention.

This does not mean that 1,930 MLD gets treated as many sewage treatment plants (STPs) are running under capacity. The wastewater generation is often underestimated as it is calculated based on the water supply (it is assumed that 80 per cent of water supplied gets converted into waste water).

A sizeable number of households in the basin do not get piped water supply and hence are dependent on personal ground water sources, so they contribute to wastewater generation, and are not accounted for deciding the capacity of treatment plants. 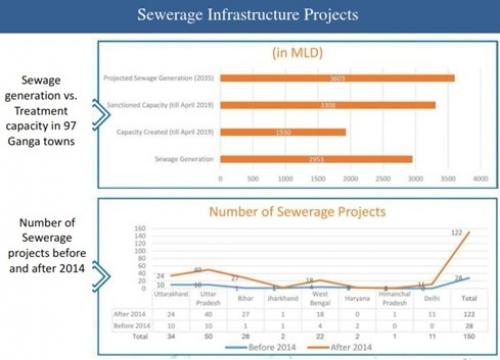 To overcome the challenge of running the infrastructure successfully, NMCG has introduced the concept of Hybrid Annuity Model, where the private party is supposed to construct and run the plant for 15 years before handing it over to the concerned municipality.

This also means that the operator would only get paid if the STP works efficiently and meet all the discharge norms. Also, to improve monitoring of the treatment plants, they have introduced the concept of ‘One city, one operator’. This might work for new projects but would be difficult to implement in existing projects. 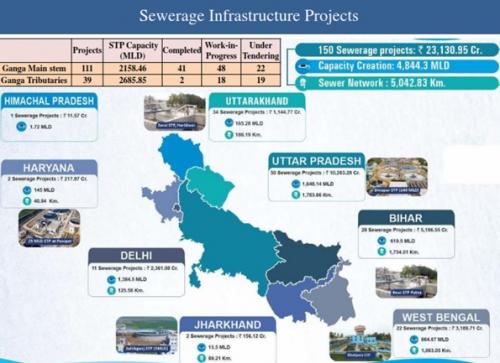 Most of the treatment plants that are being developed under this programme are not supported with a sewerage network, which means the wastewater would flow openly throughout the city but would get tapped just before it enters the river and diverted to a sewage treatment plant.

Due to absence of sewerage network and successful implementation of Swachh Bharat Mission, now more than 70 per cent of properties are dependent on onsite sanitation systems (OSS) such as septic tanks and pit latrines.

These systems store excreta for some time and digest it to produce faecal sludge, which needs to be periodically emptied. In absence of a designated disposal site, the vacuum tankers (also known as honey suckers) used to suck faecal sludge out of OSS, discharge the collected sludge in open drains, fields, empty plots etc, polluting the environment.

Though there is enough evidence that a little bit of tweaking at the STP can make them eligible for receiving and treating this harmful faecal sludge, none of the proposed STP projects have the component of co-treatment designed for this. How can we expect a Nirmal Ganga, if we keep defecating in open drains?