Saying no to Monsanto 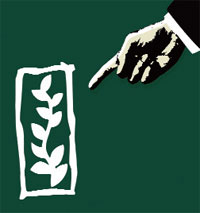 ON the trail of rice a couple of years ago, I discovered the fascinating social ecology, agronomy and history of this crop through some amazing people—farmers, breeders, scientists and conservers. There’s a special bond they have for this foodgrain which they nurture with as much passion as it nourishes them, linking the ancient story of Nature’s munificence and ravages with the current challenges of climate change and the hunt for food security.

Among the many obsessive rice growers I’ve met is Natabar Sarangi, a retired school teacher who found his life’s calling in maintaining his cherished collection of around 350 indigenous rice varieties on a tiny farm in his native village of Narisho in Odisha. Then there is the singular Debal Deb who was then guarding his priceless hoard of some 700-odd land races in West Bengal from all kinds of threats, specially drought and corporate predators. He was rescued and brought to Odisha by another lover of traditional agriculture, Debjeet Sarangi who runs a small outfit promoting sustainable agriculture. For them, the richness of the past holds the promise of the future.

And there are the many scientists in public research laboratories who have made ready the seeds to combat the ominous vagaries of climate change. Such as scientists from the Central Soil Salinity Research Institute in Karnal who have developed several salt tolerant varieties of rice, wheat, mustard and gram and maize hybrids with increased drought tolerance. Sarangi and Deb have dozens of rice varieties that are resistant to the worst threats that climate and soil can inflict: drought, floods and salinity. All of these are given away freely to those in need— farmers recovering from super-cyclones, normal floods and drought or anticipating these calamities.

Why am I writing about men such as these when the title of the column says it’s about Monsanto failing to get a patent for its stress-tolerant transgenic plant? This piece, of course, is about the July 5 decision of the Intellectual Property Appellate Board (IPAB) upholding the decision of the Controller of Patents to reject all of Monsanto’s claims. But reading the order, I remembered, quite suddenly, Sarangi giving away a 50 kg bag of Sohra and Nadia Phulo rice seeds to farmers from a severely drought-affected area of the state.

It was the wisdom of the ages that he was readily sharing with farmers. There was no question of a trait fee or a royalty, charges that biotech companies generously slap on to the cost of the transgenic seeds they purvey. For reference: Monsanto has earned royalty of over Rs 2,000 crore for the genetically engineered (GE) Bt cotton it has been selling in India since 2002. That’s in addition to the high cost of the Bt hybrids themselves.

What was Monsanto’s claim that IPAB rejected? It had sought to patent “methods for enhancing stress tolerance in plants and methods thereof”, a description that was later amended to “A method of producing a transgenic plant with increased heat tolerance, salt tolerance, or drug tolerance.”

Specifically, it said the invention relates to a method of increasing the biotic and abiotic stress tolerance of plants through a DNA molecule that expresses a cold shock protein (CSP) within the cell of the said plant. The Patent Office in its rejection last year had said the following:

i) the claims lack inventive step; ii) that the structure and function of CSP was already known in cited prior art and is obvious to persons skilled in plant technology to make transgenic plant; (iii) it is mere application of already known process in producing plants tolerant to heat, salt and drought conditions and that such claims fall within the scope of Section 3(d) of the Patents Act which bars patent protection for new use of a known process.

More important, it also said that such claims were not patentable under Section 3(j) as claims also include essential biological process of regeneration and selection and includes growing of plant in specific stress condition.

In all, Monsanto had made 20 claims in its original application. It had contended that the role of CSP genes was not clearly known even in bacteria leave alone in predicting that the same would induce drought, salt and temperature tolerance in plants. But IPAB dismissed its claims and upheld the decision of the patent office.

To readers familiar with India’s patent law this might ring a bell. These are the same grounds on which pharma giant Novartis was denied a patent for its Glivec cancer drug. It was the very same Section 3 (d) that felled the drug MNC and made global headlines. It might do so once again.

But I am wondering. Can we be sure that these prohibitively expensive GE plants will be more tolerant to extreme stress than the traditional varieties of Deb and Sarangi?