A pirate loved by academics 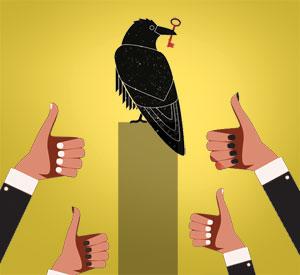 There is one woman whose name is on the lips of scientists and researchers across the globe. Most of them send up a hallelujah to her. She is Alexandra Elbakyan, a neuroscience researcher from Kazakhstan who has opened the doors of knowledge to millions. Elbakyan is the founder of Sci-Hub, a website that offers free access to research papers and scholarly articles in a wide range of disciplines that were hitherto inaccessible because of the cost of subscription charged by the publishing industry. She is, of course, a pirate and her website runs afoul of the law but despite takedowns of her domain names, Sci-Hub is still holding high the flag of open access.

Set-up in 2011 when Elbakyan was 23, Sci-Hub is today the largest website for research papers and articles. According to PeerJ which analysed the website’s content, Sci-Hub’s database contains an astounding 69 per cent of all the 81.6 million scholarly articles published and an even higher chunk of those published in subscription journals at over 85 per cent. As for the publishers whose papers Sci- Hub covers, Elsevier, the world’s largest publisher, is affected by over 97 per cent.

It is no surprise then that the empire has struck back even though the pirate is elusive and hard to pin down. Elsevier and some leading US publishers of scientific journals have taken Sci-Hub, whose website is hosted in St Petersburg, Russia, to court for breach of copyright. They have even won damages running into millions of dollars, money that is unlikely to be recovered since the Kazakhstani Robin Hood—she has been thus described by champions of open access—has no assets in the US. In June 2017, Elsevier was awarded $15 million in damages, while in November last year, the American Chemical Society’s claim for a penalty of $4.8million for illegal distribution of its copyrighted content was accepted by a US court. It also ordered Internet search engines, web hosting and Internet service providers and domain name registrars to stop facilitating access to Sci-Hub’s domains worldwide. In other words, there should be a shutdown of the website.

Some registrars, not all to be sure, have complied with the court order, resulting in problems of access to Sci-Hub. However, an unfazed Elbakyan says she is working on solving the Domain Name System (DNS) issue and intends to keep the website running. DNS takedowns, according to expert opinion, may work temporarily but is unlikely to shut down Sci-Hub permanently because academics are likely to use more devious routing methods or other DNS servers. But it is also certain that the $10-billion publishing industry will not stop in its efforts to stymie the most serious threat to its profits.

Sci-Hub has already won the moral war by unleashing the pent-up anger of academics and researchers. Their frustration stems from the fact their work, funded largely by taxpayers, is hidden behind the paywalls of private publishing houses that charged universities and other institutions millions of dollars to access—amounting to a double charge on the public. Soon after Sci-Hub was launched, almost 9,000 academics determined not to peer-review, or to undertake editorial work for Elsevier journals. That revolt originated in the UK but there have been several others. In Germany, over 200 institutions have refused to renew Elsevier subscriptions demanding a steep reduction in rates. And the odium has become more open. In 2015 when Elsevier filed its case, a group of researchers and writers wrote an open letter denouncing the lawsuit which it said “devalues us, authors, editors, and readers alike. It parasites on our labour, it thwarts our service to the public, it denies us access.”

Two years ago, Nature Publishing Group named Elbakyan as one of 10 people who mattered most in 2016. As the battle over open science heats up, the young woman from Kazakhstan will matter even more in 2018.