Bright skies named colour of the year: Here’s why there’s so much more to the heavens than blue 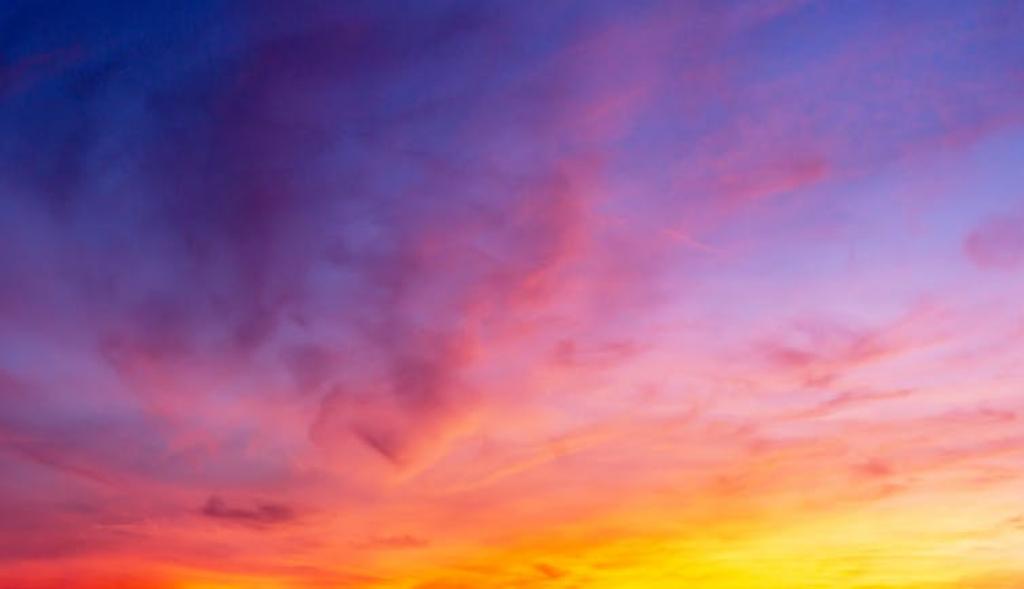 This mellow light blue may certainly seem familiar. Depending on where and at what time of the day you look at the sky, you might well expect to catch a glimpse of a similar colour.

Yet take the time to watch the sky from the horizon to the expanse above your head, during all weathers and from dawn to nighttime, and of course you’ll see that it is filled with many colours. Over hundreds of years, physicists have worked to understand why the sky holds so many shades, from a myriad blues to red and even green. Here’s what we’ve learned, and what to look out for while contemplating “bright skies” and immersing yourself in skywatching.

The Sun’s light is made up of different electromagnetic waves, and their various wavelengths are associated with a different colour. Shorter waves are seen as blue, slightly longer waves as yellow, and even longer as red.

When these waves are seen together they look white. But this light has to travel through our atmosphere before it gets to our eyes, and atmospheric molecules are much smaller than the wavelength of the Sun’s light. As the light hits these molecules, they scatter it in all different directions. This effect is called Rayleigh scattering.

In this process, more of the bluer light, which has shorter wavelengths, is scattered, resulting in the sky becoming blue wherever you look. Meanwhile, the Sun becomes more yellow looking since the light from it is now missing those longer blue wavelengths.

But the daytime sky isn’t the same blue all over. You’re more likely to find the Dulux bright skies colour closer to the horizon where the blue is more washed out or lighter.

This is the impact of Mie scattering, which is a similar process as Rayleigh scattering but caused by larger particles (such as water vapour or fine pollution particles in little droplets). These types of particles remove the red, yellow and blue colour components from a white light beam in equal measures and do not alter the colour of the light passing through the atmosphere or being scattered back to an observer. This leads to the sky turning whiter in addition to the blue caused by Rayleigh scattering.

The influence of white within the blue of the sky becomes stronger towards the horizon where the light has to pass through much more atmosphere to arrive at the observer. The various tones and shades of blue observed become nature’s visualisation of what the atmosphere is currently composed of. The whiter it appears, the more extra particles are present.

A tool to measure just how many particles are suspended in the sky was developed by Horace Bénédict de Saussure, an 18th-century Swiss geologist and alpine explorer. Called a cyanometer, it is a colour wheel featuring 53 different colours for the observer to compare to the sky.

If you skywatch at dusk, you’ll see a brilliant display of colour that captures intense red tones especially close to the direction of the setting sun. Since the Sun’s evening light travels through much more of our atmosphere than when the Sun is higher in the sky, by the time it reaches us it has lost much of its blue component through Rayleigh scattering. If aerosols are present higher up in the atmosphere – for example caused by volcanic eruptions – this can become far more extended and colourful.

Once the sun is below the horizon, you will see a strong blue colour in the sky again. This cannot fully be explained by Rayleigh or Mie scattering. Instead, this is due to the presence of ozone (a colourless or pale blue gas), which does not scatter the light but absorbs it and breaks it apart.

Its impact is only noticeable when the rays of the sun have to pass through even more atmosphere to reach us (like when it travels from beyond the horizon). The ozone then strongly absorbs red and orange light, making the small amount of light we see in the twilight sky blue.

Venture out at night in a place free of light pollution and its orange sky glow and you might notice that, despite the lack of sunlight, the nighttime sky is not black at all. Instead, we can sometimes observe what is called air glow, which is our own atmosphere radiating a faint light. This is caused by atoms – mainly oxygen and nitrogen - forming molecules at an altitude of 100km-300km.

This glow is always present but usually too faint to see. But it contributes to the sky turning a very dark red or blue-green colour. You can capture it with cameras that are more sensitive than the eye. But at low light levels, our eyes lose their colour vision and merely see a grey blackness.

In these ways, the colours of the sky show us ways light can interact with our atmosphere. And through this science, we’ve even learnt how to recognise and explore signs of life in the skies of planets beyond our solar system (exo-planets) by analysing the light from them. Traces of an atmosphere were first measured in 2001 for the exoplanet HD 209458 b – sometimes called Osiris – in the constellation of Pegasus. In 2019, scientists even discovered traces of water in the atmosphere of an exoplanet (K2-18 b) that has temperatures that could support life as we know it.