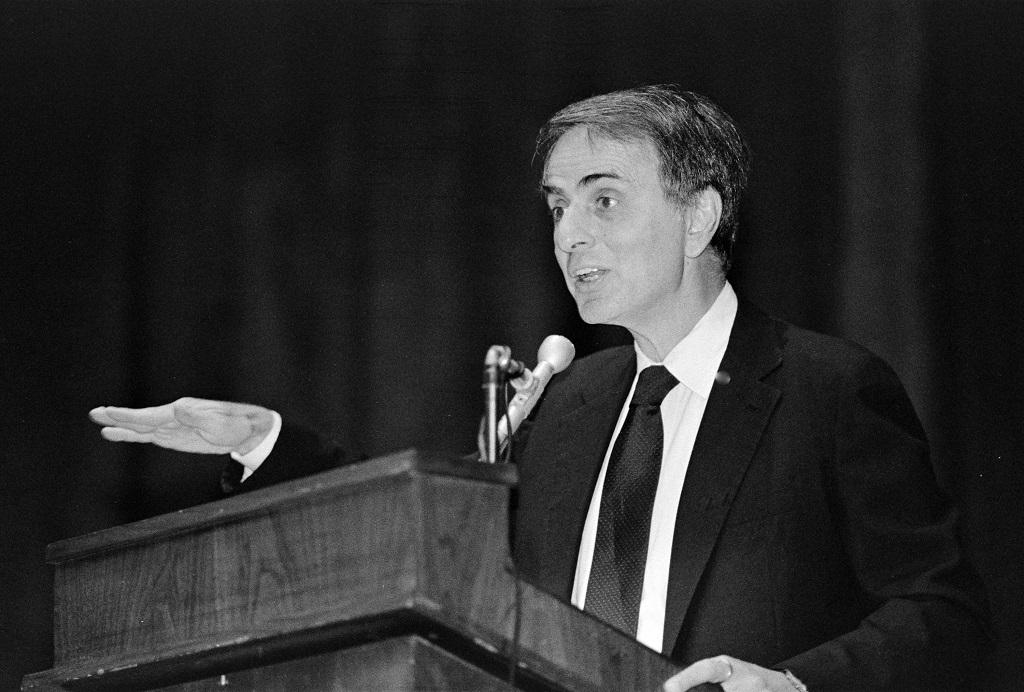 Carl Sagan is famous across the globe as the citizen scientist who brought forth the mysteries of the universe to millions of people across the world. But his contribution to protecting the planetary environment and enhancing respect for non-human species is not as widely known.

The creator of Cosmos: A Personal Voyage was talking about global warming and humane treatment of animals before they became fashionable.

The Pulitzer Prize-winning author and scientist was an animal rights visionary in every sense of the word. In a lecture at Cornell University in 1994, he spoke of the social structure of chimpanzees that he described as being one that he “would like to see more of in humans.”

Speaking of our relationship with other animals, Carl Sagan said:

“Humans — who enslave, castrate, experiment on, and fillet other animals — have had an understandable penchant for pretending animals do not feel pain. A sharp distinction between humans and 'animals' is essential if we are to bend them to our will, make them work for us, wear them, eat them — without any disquieting tinges of guilt or regret. It is unseemly of us, who often behave so unfeelingly toward other animals, to contend that only humans can suffer. The behavior of other animals renders such pretensions specious. They are just too much like us.”

Thus, we see animals exploited in the wildlife trade, elephant rides in Amer fort in Jaipur in India, crocodile shows in Thailand and tigers being chained perpetually so that tourists can click pictures with them in proximity in Thailand. World Animal Protection is actively attempting to bring all these atrocities to an end and will continue to do so in the future.

The importance of good writing to aid the humane treatment of animals cannot be emphasized enough, especially after the tragic year of 2020. World Animal Protection takes exceptional note of some publications in this regard in India, alongside Sagan’s Cosmos: Possible Worlds.

The Gopi Diaries: Coming Home, a book about the relationship between a dog and humans, was a unique endeavour in Indian literature by Infosys Foundation chairperson, Mr Sudha Murty. This book and the exemplary coverage given to the crisis horses find themselves facing in Kolkata’s Maidan by senior journalists Biplab Sarkar and Anindya Jana in the regional daily Aajkaal give us hope that all is not lost in a world driven apart by death and destruction.

The most outstanding legacy of Carl Sagan as an astronomer and a scientist is his famous speech titled Reflections on a Mote of Dust, which he delivered many times in his public presentations, is the most befitting tribute to him as an environmentalist. This speech is reproduced here in full:

“We succeeded in taking that picture [from deep space], and, if you look at it, you see a dot. That’s here. That’s home. That’s us. On it, everyone you ever heard of, every human being who ever lived, lived out their lives. The aggregate of all our joys and sufferings, thousands of confident religions, ideologies and economic doctrines, every hunter and forager, every hero and coward, every creator and destroyer of civilizations, every king and peasant, every young couple in love, every hopeful child, every mother and father, every inventor and explorer, every teacher of morals, every corrupt politician, every superstar, every supreme leader, every saint and sinner in the history of our species, lived there on a mote of dust, suspended in a sunbeam.

The earth is a very small stage in a vast cosmic arena. Think of the rivers of blood spilled by all those generals and emperors so that in glory and in triumph they could become the momentary masters of a fraction of a dot. Think of the endless cruelties visited by the inhabitants of one corner of the dot on scarcely distinguishable inhabitants of some other corner of the dot. How frequent their misunderstandings, how eager they are to kill one another, how fervent their hatreds. Our posturing, our imagined self-importance, the delusion that we have some privileged position in the universe are challenged by this point of pale light.

Our planet is a lonely speck in the great enveloping cosmic dark. In our obscurity — in all this vastness — there is no hint that help will come from elsewhere to save us from ourselves.

It is up to us. It’s been said that astronomy is a humbling, and I might add, a character-building experience. To my mind, there is perhaps no better demonstration of the folly of human conceits than this distant image of our tiny world. To me, it underscores our responsibility to deal more kindly and compassionately with one another and to preserve and cherish that pale blue dot, the only home we’ve ever known.”

It is our duty, to imbibe the essence of this message and to be kind to each other, as well as to all forms of life on this planet.