Is your sexual preference only a result of your genes or do environment and culture also influence it? 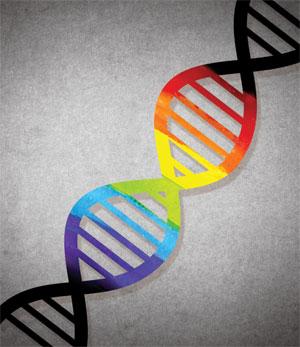 Is sexual idiosyncrasy—whether you are straight, gay, bisexual or any of the many shades of grey in between—an impression of your genes, suggesting you are born that way, or is it an expression of your free will, regardless of the body’s witness? It’s a prickly issue.

Science, needless to say, has been a key referee in this nature vs culture quarrel over the origins of sexual identity. In the January edition of Archives of Sexual Behavior, Canadian scientists from the University of Lethbridge in Alberta presented evidence that strongly suggests a link between genes and sexual orientation, more so as it cuts across cultures.

The researchers found that a class of Mexican gay men, called muxes, displayed far greater levels of separation anxiety—suffering caused by separation from a beloved parent or trusted guardian during childhood—as compared to their straight counterparts, a parallel also found in gay men in Canada and fa’afafine—persons born as male who exhibit both masculine and feminine traits—in Samoa islands in Polynesia. They ruled out the possibility that culture may have shaped this difference as studies have shown that anxiety is more likely inherited rather than learned.

On the other hand, the researchers root for the biological argument as there is some evidence that male babies exposed to female hormones like progesterone in the mother’s womb may turn out to be sexually ambiguous, which, in turn, may influence their separation anxiety thresholds. Besides, some studies have also found that a particular section of the X chromosome plays a role in the expression of both anxiety and same-sex attraction among men.

This isn’t the first time that science has backed the rainbow colours of LGBT (lesbian, gay, bisexual and transgender) as natural. In 1990, neurobiologist, Simon LeVay, found that the size of a group of cells in the hypothalamus was smaller in gay men than in straight men, suggesting homosexuality might have something to do with genes. Even though LeVay disavowed any causal link, his findings had a triumphalist vibe for the gay rights movement. Three years later, when geneticist Dean Hamer published research suggesting there might be a gay gene, gay activists exaggerated it as proof that being gay wasn’t after all their “fault”.

The trouble is that almost all human traits, including gayness, are an outcome of the interplay between genes, environment and social milieu. To claim that there is such thing as a gay gene would be disingenuous. Yet, gay rights activists have persisted, in tacit collusion with scientists and scholars, with this scientific fiction, as it has yielded impressive results, including the recent US decision to sanction same-sex marriage.

Despite its flaws, gay activists find the “born this way” argument politically expedient because it instantly washes away the mud of unnaturalness or immorality slung at them by the puritans. They believe that the free choice argument is dangerous as it not only makes it difficult to counter the conservative offensive, but it also puts them in the same basket as perverts like paedophiles.

Gay rights movements have turned biological determinism into a rallying cry, but it is a double-edged sword that has been abused by all manner of regressive movements and regimes to vilify and oppress women, blacks and gypsies, among other subalterns.

Some scholars offer social constructionism—the idea that who we are and what we do is often shaped less by free choice and more by the values and ideas of the society we live in—as an honorable exit out of this embarrassing predicament.

If we can make conservatives accept that while desire is biological, it is nevertheless shaped by culture, then, so we hope, it might be easier for them to accept the greys of sexuality as no different from their own. But having won so many battles on the rhetoric of “biology is destiny”, can the gay rights movement afford this course correction?