Possibility of severe thunderstorms in parts of India

Existing weather system can even cause hailstorms in eastern Rajasthan, northern Madhya Pradesh and parts of Uttar Pradesh

This past weekend, an upper air trough (western disturbance) significantly impacted North India, especially Jammu and Kashmir. As anticipated, maximum temperatures dipped by 12-15°C in most places in the state on Sunday, October 25, due to rain and snow. Jammu-Srinagar highway was closed to traffic due to frequent landslides. Rain caused water logging in Srinagar on Sunday. Thundershowers were also reported in Punjab and Haryana.

This upper air trough is set to move southwards till central India during this week and set the stage for thunderstorms and rain in parts of eastern Rajasthan, Madhya Pradesh, north-western Chhattisgarh, Uttar Pradesh, Vidarbha, Bihar and Jharkhand till Friday, October 30.

What does this atmospheric pattern mean?

A section in my previous blog explains what upper air troughs are. Usually, such troughs don’t dip as low as central India in October. The "unseasonal" rain India saw in February and March this year was also because these troughs were very intense and had dipped more than usual. Such troughs move from west to east and ahead of their arrival, they destabilise the troposphere (part of atmosphere where weather systems exist), creating conditions for thunderstorms. Under ideal conditions, these thunderstorms intensify into severe thunderstorms and are capable of producing heavy rain in a short time, strong lightning, hail and strong winds.

Associated with such upper air troughs, which are typically observed at around 30,000 feet, are cyclonic circulations or low pressure regions with anticlockwise spin of air in the northern hemisphere, in the lower levels of troposphere (around 20,000 feet). These circulations typically develop because of upper air troughs and they move along with the troughs. The image above shows one such circulation coming from Pakistan to north-central India by October 30. This circulation will reach northern Madhya Pradesh by Wednesday, October 28, and travel south-east near Uttar Pradesh by Thursday, October 29.

What is expected from this setup? 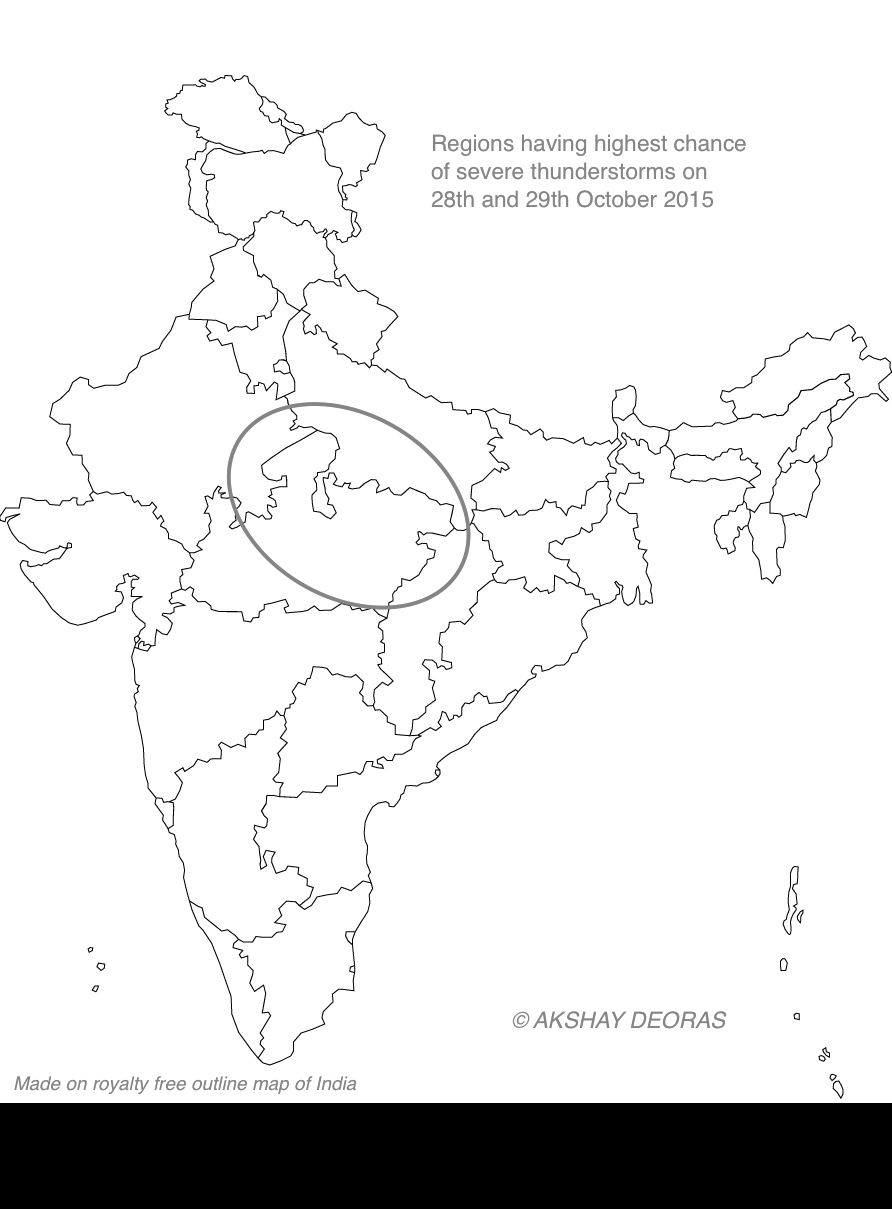 If this level is further away from the Earth’s surface, hailstones get enough time to melt after they have precipitated from thunder clouds. The positive temperatures between this freezing level and surface of the Earth are responsible for this melting. If this level is nearer the ground, hailstones reach the ground without evaporating much and what we get is hail.

On Wednesday, October 28, severe thunderstorms capable of producing rain and lightning can be expected in eastern Rajasthan (areas east of Jaipur, Sawaimadhopur), parts of Madhya Pradesh (particularly around Jhansi-Gwalior) and parts of Uttar Pradesh (areas west of Kanpur-Allahabad) adjoining northern Madhya Pradesh and Rajasthan. The freezing level in these areas has reduced below normal and owing to high instability, some  thunderstorms in these regions can even produce hail.

On Thursday, October 29, the region of thunderstorms and rain will shift slightly eastwards. Eastern Madhya Pradesh, north-western Chhattisgarh, eastern Uttar Pradesh (around Allahabad), and parts of Bihar and Jharkhand will get rain. Some areas may also get hail. People living in these areas must remain alert.

Climatologically speaking (based on 1971-2000 data), these areas had not seen a single day of hail. Hence, if the anticipated hail arrives, it will be considered a bit unusual. 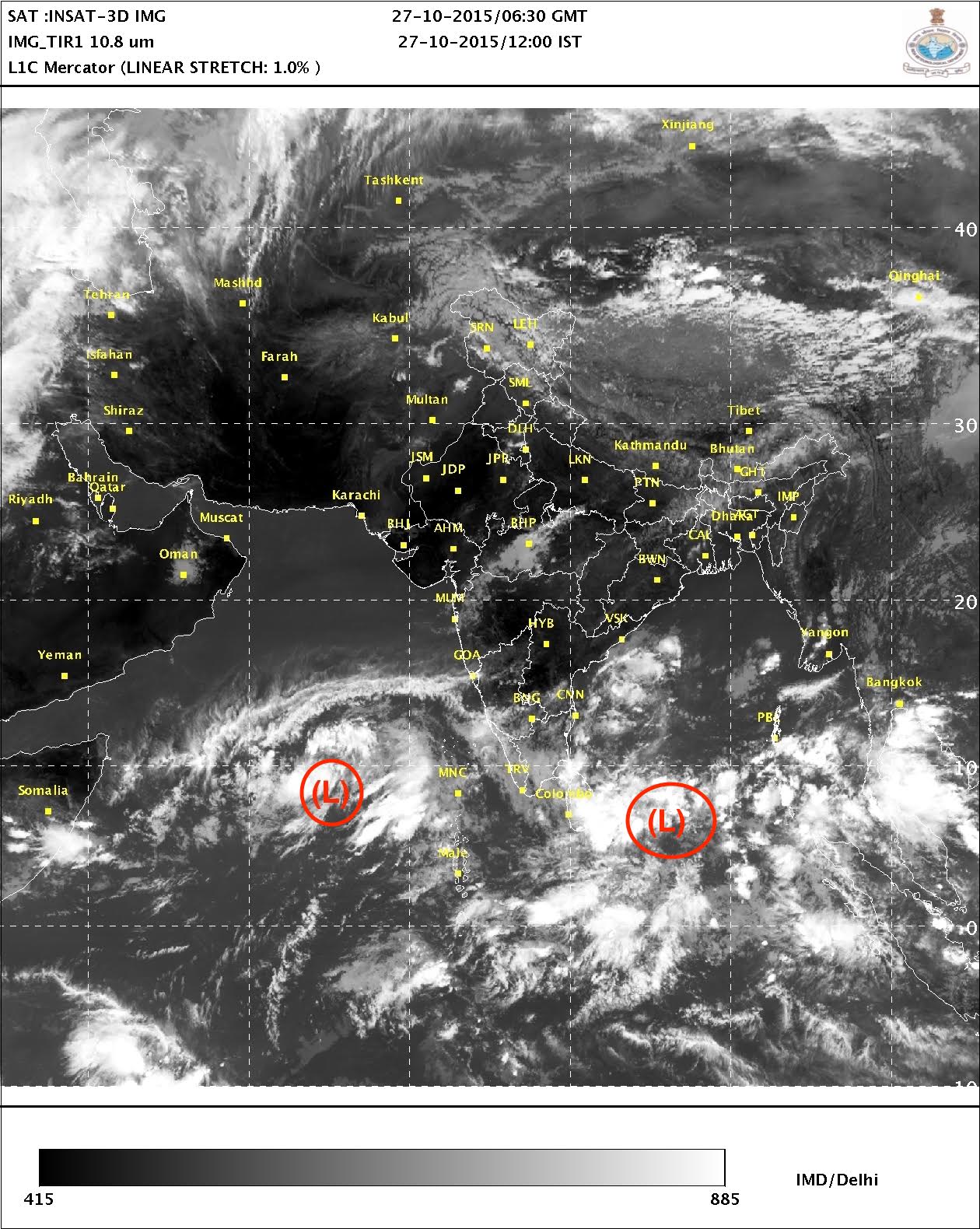 According to IMD’s update on Tuesday afternoon, the Arabian Sea low pressure has become a "well-marked low pressure" system. Data from the Thai Meteorological Department suggests that this system has a mean sea level pressure of 1006mb while the system in the Bay of Bengal has mean sea level pressure of 1008mb. But, as per present weather models, the low pressure in the Bay of Bengal isn’t expected to intensify much due to unfavourable conditions. It will lead to the onset of northeast monsoon in parts of South India on October 28 and won’t cause any threat to India.

However, due to marginally favourable conditions, the Arabian Sea low pressure can intensify slightly as it moves towards Gulf of Aden. Present weather models don’t expect this low pressure to track towards India and hence, it isn’t expected to threaten India.