Water-sensitive urban design and planning approach, which mimics the natural water cycle, can help fix water systems in the city 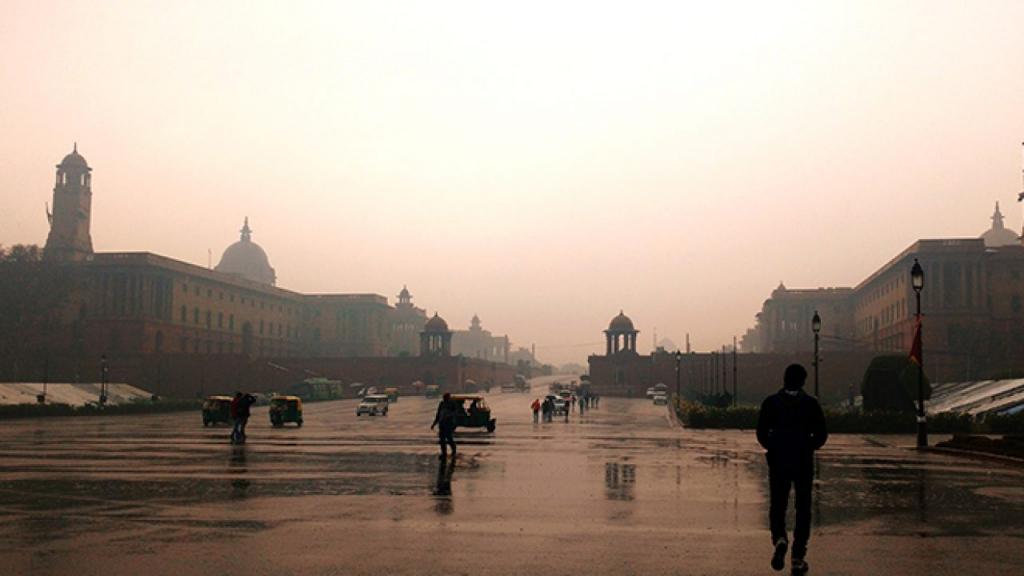 The National Capital Territory (NCT) of Delhi is one of the largest urban agglomerations in the world faced with a complex water crisis. The groundwater table is 40 metres below ground level in as much as 30 per cent of the city.

The Yamuna is at its most polluted within the urban limits of Delhi; innumerable water bodies have been encroached upon and are vanishing; and the water supply in the city is dwindling. Every monsoon, even during moderate rainfall, the city faces urban flooding.

The urban water cycle of Delhi is broken and in dire need of a paradigm shift to address vital issues related to urban water management.

Why water-sensitive design and planning?

It integrates and optimises the use of available water resources and completes the urban water cycle through measures like protection of local water bodies, stormwater harvesting in public places, wastewater recycling and reuse, and improving water efficiency at household, neighbourhood and city-regional scale.

To address issues related to urban flooding, the WSUDP approach focuses on capitalising on the potential the existing green infrastructure in the city, like water bodies, wetlands and parks and open spaces.

Stormwater harvesting in parks and open spaces provides an opportunity to address localised water-logging and urban flooding, as these spaces can be utilised for retention of excess run-off during peak rainfall. These spaces also allow infiltration, which helps in recharging groundwater. It is be noted that the NCT of Delhi has more than 16,000 parks and open spaces.

These parks are essential green infrastructure that can augment the drainage capacity of the city. It is estimated that these parks, covering and area in excess of 8,000 hectares, have the potential to harvest 12,800 million litres of rainwater annually.

To assess the potential of harvesting and moderating urban runoff generated during monsoon within the open spaces of Delhi for sustainable stormwater management, CSE prepared the report Roadmap for Implementation of WSUDP in Delhi: Stormwater Harvesting in Parks and Open Spaces.

The report is a guiding document to implement WSUDP in Delhi to address issues related to urban flooding and augmenting the drainage infrastructure of the city. The document provides the profile of Delhi with information on rainfall pattern and statistics, urban planning and provision of public parks and open spaces.

Parks and open spaces were selected as pilot case studies, where WSUDP potential was calculated and certain preliminary design guidelines for each of these parks recommended.

The report also provides various options, techniques and principles to consider while designing and landscaping open green spaces in a sustainable manner that protects and enhances all of their natural resources while making provisions for human use.

The WSUDP potential for stormwater harvesting is analysed based on indicators such as area under parks, post-monsoon groundwater level, geology and soil type and flood hotspot.

These indicators are assessed with respect to land use and the urban fabric. Out of the 16,299 parks in the city, 15,019 are under the jurisdiction of the South, North and East Delhi Municipal Corporations.

A majority of these parks are of neighbourhood scale (area less than 1 hectare), located in residential areas across the city. It is estimated that 3,423 million litres annual run-off can be harvested in these parks alone. 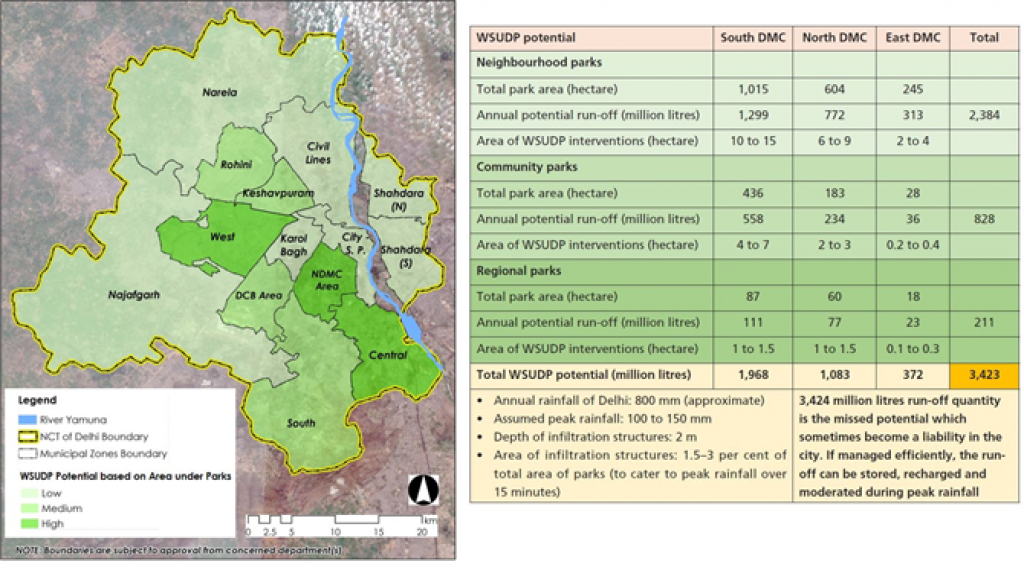 WSUDP potential in Delhi. Source: Roadmap for Implementation of WSUDP in Delhi: Stormwater Harvesting in Parks and Open Spaces

This quantity is the missed potential that sometimes becomes a liability. If managed efficiently, the run-off can be stored, recharged and moderated during peak rainfall potential.

WSUDP structures that can be implemented to harvest this potential require only 1-3 per cent of the total park area.

To understand the potential and scope of interventions, stormwater harvesting potential of select parks in Delhi was calculated. Pilot case examples are selected based on the flooding hot-spots in the city.

Challenges and opportunities — in terms of legal, social and environmental sustainability of any such intervention in open green spaces — have been identified.

From these findings, park-specific interventions and strategies have been extracted, covering all the measures undertaken to improve the way in which the flow of run-off or water generated by rainfall in urban areas is managed and its volume stored or otherwise retained. 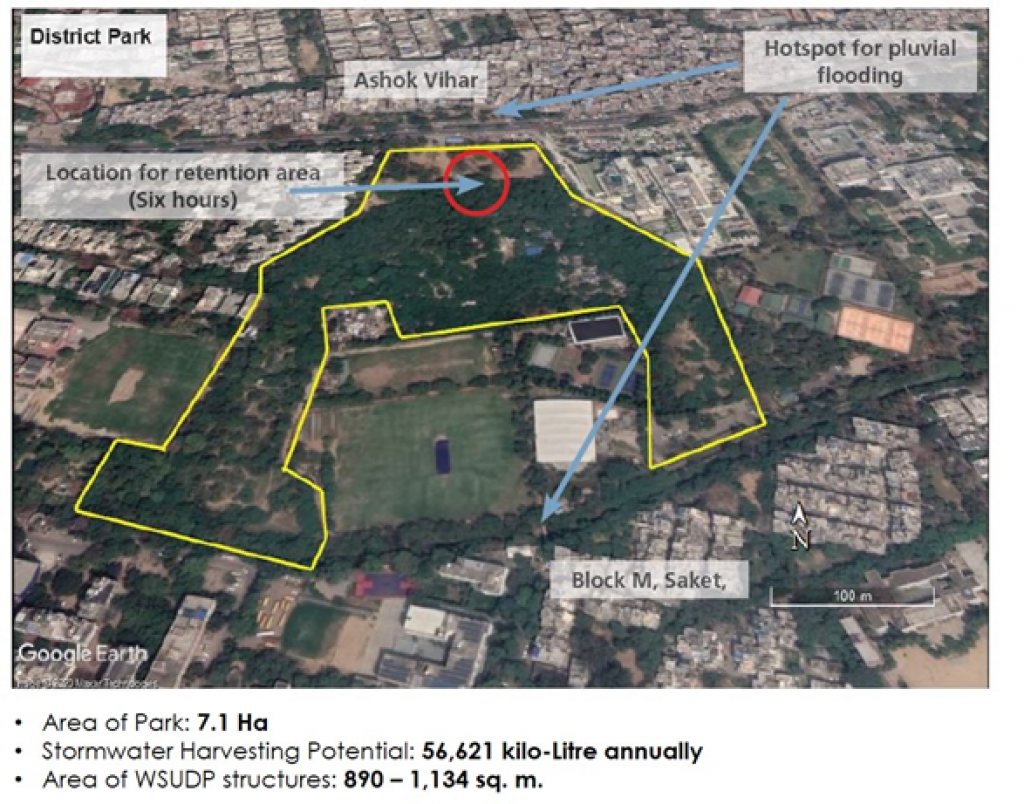 The aim of this approach is not only to capture the runoff generated in parks for infiltration and recharge, but also to reduce pollution and flooding at catchment level. The said approach also brings multiple benefits such as recreational opportunities, amenities and biodiversity.

As highlighted in the report, the blue and green spaces thus created not only reduce and treat storm water at its source, but also deliver environmental, social and economic benefits.