China has toppled Japan from No 2 spot and is set to become the leader in global patent filings, specially in future technologies 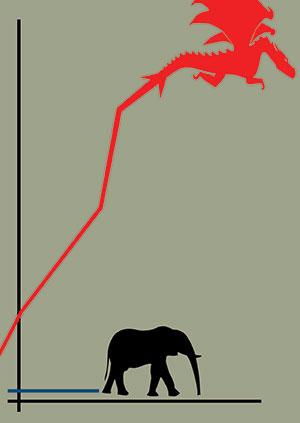 March has been China’s month for making a brilliant splash on the patent landscape. First there was a report from the World Intellectual Property Organization (WIPO) which said that Chinese companies and individuals had filed 48,882 international patents in 2017, displacing Japan from second place in global rankings. It was the only country to record double-digit growth in its patent applications last year. Then, there was an analysis by the Financial Times which put China at the top in the hot new blockchain technology filings.

China was very much the flavour of the WIPO report. While delighting in the record increase in international patent filings to 243,500, the Geneva organisation said it was all due to China’s contribution. WIPO chief Francis Gurry said China is expected to take the top spot from the US in three years, in applications that “represent the best new technology”. China has already knocked Japan off from second spot, making its rise to the top ineluctable.

The WIPO news which comes in the midst of the clash of the titans over a simmering trade war has proved to be a diplomatic boost for Beijing which has lost no time in putting Washington on the defensive. US President Donald Trump has repeatedly accused China of stealing its intellectual property and ªforcingº US firms to transfer technology and used it to penalise Chinese exports. But Gurry’s high praise of China’s achievements has made Trump’s charges look like bluster to protect US industry. WIPO said Chinese tech firms were increasingly looking outward, “seeking to spread their original ideas into new markets as the Chinese economy continues its rapid transformation”. What is noteworthy is the use of the phrase “original ideas” which firmly quashes the notion of the Chinese being copycats.

The fact is China is becoming a formidable leader in technological innovation and the US is feeling threatened by the looming profile of top Chinese firms. WIPO puts two Chinese firms at the top of the innovators list, Huawei Technologies and ZTE Corp. while Intel Corp. of the US pulled up third, followed by Mitsubishi Electric Corporation of Japan.

With China and Japan driving the surge in global patent applications, a global shift in technological prowess is clearly taking place, leading to a “new geography of innovation”. But does this geography include India? The latest WIPO release makes no mention of India among the list of notables. However, WIPO’s latest World IP indicators report places India in the 12th spot on patent filings for 2016. This could be deemed a respectable position even if it does not appear to cut the mustard on emerging technologies.

Such as blockchain, where China leads the pack. The Financial Times analysis shows that of the 406 blockchain patent applications filed last year, more than half were from China. And of the top nine companies that filed such patents between 2012 and 2017, six were Chinese. What is blockchain? It is a public database that records transactions done with it and is well-protected against outside interference. It’s a system that is not stored on a specific server or node, but is instead distributed across innumerable nodes on the web. Indian firms are said to account for some six dozen patent filings, mostly by start-ups. This means we have a lot of catching up to do.

Why are Indian firms lagging? The problem as we all know is the dismal spending on R&D which has been stagnant at 0.6 to 0.7 per cent of GDP for the last two decades. This is way below the outlay of China, South Korea, Israel and, of course, the US. China may be spending just 2.1 per cent of GDP on R&D but that amounted to US $233 billion in 2016, over 78 per cent of it coming from its enterprises. Indian companies, on the other hand, are notorious for their niggardly spending on research.