The Avon lady lifts our biodiversity 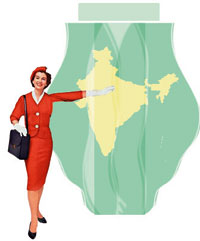 Early this month Delhi’s Vigyan Bhavan was host to around 500 delegates from across the world as they attended a five-day conference organised by the Convention on Biological Diversity (CBD) to discuss its Nagoya Protocol on access and benefit sharing (ABS). The meeting was hosted by the Union Ministry of Environment and Forests (MoEF). It was an instructive meeting and from the vast plenary halls and committee rooms of the government’s premier conference venue some startling facts came to light.

First, an explanation about the protocol. The Nagoya Protocol was adopted by the Conference of the Parties (CoP) to CBD at its tenth meeting on October 29, 2010, in Nagoya, Japan. It has a long-winded title, The Nagoya Protocol on Access to Genetic Resources and the Fair and Equitable Sharing of Benefits Arising from their Utilization, but this makes it easier to understand what ABS is all about.

The protocol comes into force 90 days after the 50th country ratifies it. So far, only five countries have ratified it, although 92, India among them, have signed it. This means the protocol will not come into force in time for the October CoP of CBD that India is hosting in Hyderabad. Ratification is painfully slow because governments find many articles of the protocol problematic.

Besides, there is the fundamental problem that CBD makes no mention of patents. And it is genetic resources that multinationals are patenting when these are put to use in a range of products. All living organisms carry genetic material that can be used for developing a wide range of products: medicines, cosmetics, enzymes, food and beverages.

Against this backdrop, it was interesting to hear India thump its chest on the laws that protected its biodiversity and the huge number of ABS agreements it had signed. “Very few countries have domestic ABS mechanisms in place,” MoEF secretary T Chatterjee told the gathering and said India was one of the first countries to put legislation in place to implement the ABS provisions of CBD as early as 2002. As a result, 100 ABS agreements had been signed by the National Biodiversity Authority and “benefits of these agreements are now reaching the communities from where the biological traits originated”.

But in committee rooms and smaller seminar halls in Vigyan Bhavan India’s ability to protect its biodiversity came in for much criticism. An analysis of exports of medicinal plants and genetic material revealed huge gaps in the way the Biological Diversity Act (2002) and Rules (2004) are being used to send out huge amount of genetic material. This is being done under a specific provision that allows commodity trade under the category of “Normally Traded Commodity”.

Scholars from think tanks, trade experts and officials from the state biodiversity boards highlighted the fact “anything can be sent out of India” and that trade in banned genetic material was taking place in a huge way.

Who in this country knows what is being exported? Not the customs, not the agriculture ministry and not the Plant Quarantine Organisation of India which should be keeping strict tabs on the import and export of such material. And as one trade expert who was instrumental in reforming the country’s trade classification pointed out, the details are always missing in the case of our exports. There are just broad classifications under which exports of banned material takes places.

There was further discomfiture for Indian participants at another roundtable where an American researcher presented a paper on the Asian medicinal plants that have been incorporated and patented by cosmetics giant Avon Products of the US.

Edward Hammond, a biodiversity expert who directs a research outfit in Texas, made some startling disclosures. Avon has filed six patent applications covering the use of 16 different Asian plant species in its skin care range. So far, three have been issued in the US and the company is seeking patent rights inside Asia itself. That can seem brazen but that’s the way these multinationals work. Many of Avon’s high-priced products already contain plant ingredients for which patents are still pending. But who is to stop a juggernaut with annual sales of US $11 million and market capitalisation of over US $9 billion? Not to forget the many patents that the elegant Avon Lady has in her handbag.

Of these 16, several are from India, including the familiar sapindus rarak, a species of soapberry that has been used by generations of women in this country. One is curious whether our vaunted Traditional Knowledge Digital Library which claims to be a bulwark against such misappropriation is aware of this. And to our MoEF mandarins: who is sharing the benefits with whom?