The curious case of Delhi’s proposed tunnels—if you cannot solve something, make it more complex 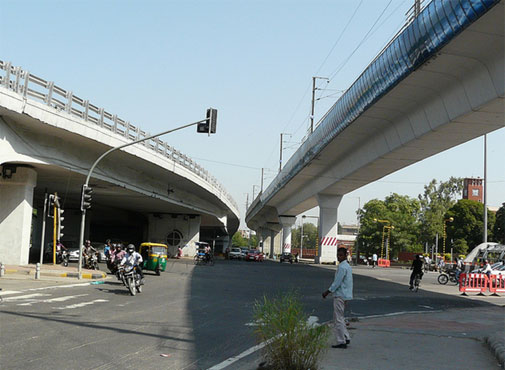 Life was beautiful…until yesterday morning when I settled with my cup of coffee and the day’s edition of a leading national daily. I started skimming over the top news stories. Then, I read this headline: ‘Easy riding: 7 tunnels proposed in key spots to ease Delhi traffic’.

SEVEN TUNNELS! Delhi’s traffic police commissioner was demanding seven tunnels as the solution to decongesting Delhi. Right when I thought I could have a peaceful morning, his rationale behind the proposal hit me in the face and left me wondering if my education as an urban designer had indeed taught me anything.

After spending a whole day mulling over this article, I think I have finally figured out how we solve urban planning problems the Indian way (with a pinch of chatpata Indian masala, of course).

I would ask myself what is responsible for congestion on Delhi roads. Maybe the number of vehicles are growing. But let’s not try to control their number or even bring it down. Instead, let’s make more flyovers!

Why are more and more people in Delhi buying cars even when the roads are congested? Maybe it is because people do not feel comfortable travelling in public transport. Also, parking is available EVERYWHERE either free or for a minimal charge! But let’s not make public transport more efficient to discourage the use of private vehicles. Let’s also not generate revenue from parking spaces to improve our public transport system. Instead, let’s make more flyovers!

Why is public transport in Delhi struggling against all odds? Maybe because we allocate meagre budgets to parent transport departments. Butlet’s not even try to infuse more funds into the Delhi Transport Corporation (DTC) andother bodies.Instead, let’smake more flyovers!

Why don’t people walk or cycle even while going to nearby places? Maybe it’s because our footpaths and cycle tracks are either non-existent or broken or encroached by cars and motorcycles. But let’s not bother organising road space with proper road design and maintenance. Instead, let’s make more flyovers!

And then, let’s make flyovers to invite all road users who had otherwise shifted to alternate routes or started using public transport due to congestion and stopped coming to these areas by cars.Though I know flyovers can only shift congestion from one point to another, let’s make more flyovers to decongest those new flyovers!

The article (in the newspaper referred to above) clarifies that the proposed tunnels are mere additions to otherwise missing road connections. So, let’s not bother doing a network assessment of the zone to look for possible connections in a technical manner.Instead, let’s make more flyovers…oops, TUNNELS (since in this particular case, we cannot make flyovers above the Ridge or central Delhi or Purana Quila or the old fort). Yes, let’s make tunnels instead!

Delhi boasts of having the School of Planning & Architecture, the oldest planning school in India. The headquarters of all the leading planning and planning regulatory bodies of the country are also located in Delhi. Yet, I fail to understand why planning in India, especially in Delhi, is still done by everyone other than planners themselves.

These demands for more flyovers, tunnels and underpasses have been increasing every year. Our road owning, planning, managing and enforcing agencies are standing at the crossroads of all traffic problems like the increasing number of private vehicles, increasing burden on public transport systems and deplorable conditions of our roads and public spaces.

The solution to these is very simple and straightforward. Realising these solutions, however, would require a focused delivery model where every department has the same vision. They must all address the problem, and not sideline it by making a new flyover or tunnel.

I would like to pose a question to all concerned planners, citizens and decision makers. What should we do if, after covering all intersections of Delhi with either a flyover or tunnel, we are still unable to solve the problem of road congestion and increased air and noise pollution? What should we do then?

Should we make more flyovers?

Adarsha Kapoor is an architect and urban designer with the Centre for Science and Environment in Delhi. He advocates the use of sustainable mobility options. This article is written with sarcasm to highlight the gravity of the situation and is the author’s personal opinion. It does not intend to hurt anyone’s feelings. Instead, it hopes to encourage readers to support comprehensive planning solutions which will solve problems once and for all.
Urban Planning Tunnel Traffic police … Traffic School of Planning … Road design Flyover Down to earth Delhi
Donate Now