The scientist as a babu 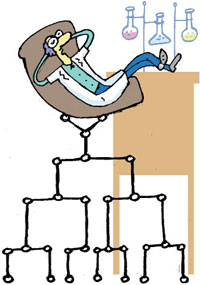 India may have very competent scientists but they lack scientific temperament

Activists who have been campaigning against the genetically modified (GM) Bt brinjal—and these include many leading scientists—tell me that they follow a standard procedure when they get documents extolling the virtues of this engineered vegetable. They look for citations and if they are missing, as they invariably are, they immediately run a check on the paper to find the sources for the claims it makes. That is how they uncovered the dishonourable practice of what is loosely termed “plagiarism” by those who should know better: the cream of our scientists in the top six academies. The cynicism of the activists is a sad reflection on the ethics of the scientific community.

It is not very long ago that one of our most distinguished scientists was similarly embarrassed. A group headed by R A Mashelkar, then the director-general of the Council of Scientific and Industrial Research, the largest group of publicly funded laboratories in the world, was found to have lifted a crucial paragraph from the submission made to them by a campaigning lawyer. Since a keen eye had spotted the incriminating passage, the Report of the Technical Expert Group on Patent Law was withdrawn by an apologetic Mashel kar. In contrast, M Vijayan, the president of the Indian National Science Academy who steered the infamous Inter- Academy Report on GM crops, has been less contrite about the plagiarism. He dismisses it as a “glitch in the drafting process”.

In both instances the reports would have had a significant bearing on policy in key areas: on the way patent laws are interpreted, and on the future course of Indian agriculture. Here, the issue is not essentially of plagiarism but of deliberate fudging. Here, it is a case of reputed scientists acting as rubber stamps for the government or for industry lobbies or for both since the interests of the two often converge in India.

There is, of course, the serious problem of plagiarism that is threatening to become the hallmark of Indian science. Just last week Biotechnology Advances, a prestigious international scientific journal, retracted three papers of Indian scientists for plagiarism. Two of these papers were presented by scientists from no less than the Indian Institute of Technology, Kanpur. Worse, some of the information in the papers was copied from Wikipedia! It should make us cringe.

Is there a crisis of morality in the science establishment? It would appear so. For long we have been used to hearing about the shortage of high-quality scientists in India, but not much is said about the lack of ethics in the fraternity. Or is it the case that lack of quality has some correlation to lack of integrity?

One question that comes up repeatedly is the reluctance of our boffins to look at reports that present a contrarian view— contrarian to what industry or the government is pushing for. As such reports by the Union of Concerned Scientists that warn of the clear dangers of GM crops or a report drafted by around 400 scientific and social science experts from around the world, titled International Assessment of Agricultural Science and Technology for Development, are ignored.

Counter-views appear to make the scientist babu nervous as they crawl up the alphabetic ladder of seniority from Scientist A to Scientist F and G or wherever the hierarchy terminates. Richard Jefferson, one of the leading molecular biologists of the world, gave me an insight into what ails our science. In an interview earlier this year, the pioneering founder of Cambia, the open source model of biotechnology development, told me that Indian science is primarily about dogmatism, turf wars, guild membership and hierarchies. Jefferson has been interacting with the science network in India since the 1980s and finds the core problem with Indian science is its absolutism, its dogmatism, and what he terms “its inability to engage in the truly empowering part of science: to be wrong”.

That might seem like a quirky view but if you think about it Jefferson has put his finger on the nub of the matter: science does not proceed by proving things right; it allows things to be proved wrong. Tie this in with what the National Knowledge Commission (NKC) has identified as the major causes of the crisis in Indian research and you get a fairly clear picture of what is holding up this country. The NKC says it is the rigid compartmentalisation of natural and social sciences; lack of long-term vision; lack of differential remuneration (we don’t reward scientists who perform or pull up those who do not, much less penalise the plagiarists); and, most telling, lack of scientific methods.

Our teaching methodology even at the university level does little to inculcate the scientific temper in students. Instead it merely turns out babus with a science background; it doesn’t make for good scientists. Good science is about independent thinking, professional and personal integrity and courage of conviction. It’s also about listening to the other view and amending one’s own if evidence demands it. We have few scientists of this calibre.