If the Unique Identity project is such a good thing why is the man heading it unable to answer simple questions about it? 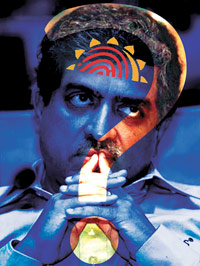 Since the publication of his doorstopper of a book Imagining India in 2009, Nandan Nilekani has done a superb job of reinventing himself. The former head of software giant Infosys Technologies was overnight cast in the role of a visionary with his unabashedly free market prescription to turn India into an economic powerhouse. All those who love Thomas Friedman—he wrote the foreword for the book—loved Nilekani, too. So it seemed just right when Prime Minister Manmohan Singh appointed him chairperson of the Unique Identification Authority of India (UIDAI) a few months later.

As Nilekani wrote in his blog: “I have long been a champion of a reform approach that is inclusive of the poor, and in my book I described unique identity as one of the key steps for achieving this goal. Giving every individual in India a unique identification number can go a long way in enabling direct benefits, and fixing weak public delivery systems, giving the poor access to better healthcare, education, and welfare safety nets.”

Who would quarrel with such a grand vision? Almost everyone, specially the pink press, was ecstatic that we had found the panacea for the country’s chronic ills. Even editors long in tooth and normally sharp of claw went overboard with reports of Nilekani’s ability to bring banks, LIC and mobile companies as partners in the project, renamed Aadhaar. They did not ask the most basic questions: about costs, its ability to reach food grains to the poor, the problems of applying biometrics in India, the question of privacy and security of data, whether Parliament had approved the project estimated to cost between Rs 45,000 crore and Rs 150,000 crore.

These questions are now popping up repeatedly from students, lawyers, economists and rights activists. At every meeting where these queries have been raised, the suave Mr Nilekani has been dismissive or at a loss. At the Rajinder Mathur memorial lecture he gave on Aadhaar, organised by Editors’ Guild of India in December last year, I was taken aback to hear him tell students UIDAI was only part of a larger issue of privacy. They had asked him about the implications of an agreement he had signed with the Ministry of Human Resource Development that would track students comprehensively, from marks to medical records, from the primary level to college and beyond through the UID number. There were other queries about costs, the cost-benefit analysis if any, about the social agenda that the authority was promising to fulfil from providing bank accounts to the homeless to ensuring that the public distribution reached all the beneficiaries.

Nilekani gave no straight answers, specially to privacy concerns. At one point he said there had to be a balance between benefit and risk. “Like nuclear energy you have to make an assessment of the risks and benefits,” he told a stunned audience. As for costs, he said Rs 3,000 crore had been sanctioned for now. But the overall budget had not been finalised. As for biometrics not being foolproof, the UID chief said he hoped to have proof of concept soon.

Perhaps, he had not thought of these issues. Perhaps, he did not know. Perhaps, the government had advised caution because the National Identification Authority of India Bill, 2010, has yet not been passed by Parliament. So Nilekani comes across as being secretive or dismissive as more probing questions are raised by young people as at a recent meeting at the Indian Institute of Science in Bengaluru. His equivocal answers did nothing to clear the air of mistrust and opacity that hangs over the project.

Not least of the concerns is whether UID will become compulsory for all Indians. To that, here’s classic Nilekani-speak: “It is not mandatory (but) sooner or later you will have to get your UID number.” If all of us have to get the 16-digit tracking ID, why does this government not say so if the UIDAI chairperson is reluctant to be categorical about it? And while they are at it how about answering the other queries Nilekani sidesteps: How will it prevent profiling of citizens? How will it prevent leakage and misuse of information, specially since private companies are involved in various aspects of UIDAI’s work (including those with CIA links)? Why is the ‘information portfolio’ on the applications expanding?

A final thought. The Draft Discussion Paper on Privacy Bill states: “Data that is maintained in silos is largely useless outside that silo and consequently has a low likelihood of causing any damage.

However, all this is likely to change with the implementation of the UID Project. As more and more agencies of the government sign on to the UID Project, the UID number will become the common thread that links all those databases together.”

Did you read that, Mr Nilekani?