The impasse in Manipur, which represents the festering unrest in the entire Northeast, needs a caring administrative policy, not bullets and raids 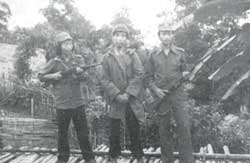 RECENTLY, I was in Mao, the first town across the Manipur border - and a picturesque hill village south of Kohima in Nagaland. At the highway hotel we were told that the last bus had just left, and now there was no way of getting to Imphal till the day after.

Imphal Must be the only capital city in the Country having power cuts for 12-18 hours a day, and a mismanaged water supply System. Men bending under the weight of two makeshift buckets on a pole and walking down to sell water in the main market are a common sight.

With the city virtually under siege (truck operators refused to ply unless the underground group that controlled the highway, withdrew their 'enhanced' tax collection rates. Earlier, they were paying a levy of Rs 5,000 per truck, but then, the Nationalist Social Council of Nagaland or NSCN had raised the ante to between Rs 20,000-50,000 per truck), the price of essential commodities had skyrocketed. Petrol retailed for Rs 50 a litre, salt for Rs 7 per kg and many items of daily consumption were just not available.

The only thing that Imphal seemed to have in profusion was govern mental organisations and the Army, both unable to deal with the root causes of tension, which includes cold-blooded murder of civilians by the Central Reserve Police Force (CRPF) and extortions and onslaughts by underground activists. The weeding out of 'tribal looking, northeastern' faces for interrogation and punishment by the CRPF and niggardly compensation by the government to the bereaved had vicious repercussions all over the state.

The long and bloody Koki-Naga conflict in the state is a hopeless imbroglio. The two tribes are not traditional enemies, but now (as one Meitei said) if one is around, the other chooses to stay away - no Matter whether they studied together, or were friends once. Both are Christians and that too, Baptists. But a leading Kuki Baptist priest recounted a shocking incident: there was a big peace rally and a large meeting of all the church leaders where everybody was represented - Kukis, Nagas, even underground activists - and a wonderful 'peace agreement' was signed. The same night, two Naga villages and The impasse in two Kuki villages were torched. Manipur, "Now, all that is left for us to do is to pray and fast for peace," said the which priest.

With the aggressive stand of Naga represents the nationalism demanding a 'Greater festering Nagaland' acquiring support from within and outside, many smaller unrest in the 'neutral' tribes - Moyangs, Anals and Lamkangs - now call them entire selves Nagas, obviously to identify themselves with the power group, Northeast and to rid themselves of the fear of needs a losing their lands. But the Kukis are likely to loose out on this, as they try caring to move down to the plains and the foothills to an already well-settled administrative and dense population.

The Kukis and Nagas are not only policy, not fighting for controlling the hills, but bullets and also a key town on the India- Myanmar border - Moreh. Moreh raids is the region's melting pot of capitalism, with rich pickings from international trade, both legal and illegal. The Isak Swu faction of the NSCN is particularly keen on controlling this business centre, which is also suspected to be an international drug trade route which is thought to finance the Northeast's fends.

Piecing together local stories, what emerges is that a massive expansion of state-sponsored higher education in the rnid-'70s had created a large chunk of educated persons who had no opportunities to channelise their efficiency- Despite being a literate people, Manipuris are very 'class' conscious about small employments. At the same time, their's is a conservative society; faced with this dilemma, the restive youths took to the underground movement.

Manipur is sitting on yet another time bomb - the deadly drug vortex and the AIDS virus. Interestingly, the NSCN is against drug and alcohol abuse and immoral social conduct. Recently, a Meitei girl who had acted in a blue film was shot in her thigh, and then excommunicated (she got away lightly because, according to the NSCN she "confessed and was repentant"). However, the bullet-riddled bodies of the men who made the film were found later. In such a situation, Army action would only drive the final nail in the coffin of national integration in Manipur. More money would fatten a corrupt upper crust. What is needed is an environment in which the people avail of the fruits of employment and industry, and sort things out for themselves.