If only cities can see wetlands

Sixty People died in a building collapse in Chennai last fortnight. There is much more than the municipal incompetence that needs to be fixed to avoid such tragic incidents. This building was located on Porur lake, a water body that provides services like groundwater recharge and flood management to an otherwise water-starved city. If you care to ask the obvious question how construction was permitted on the wetland, you will get a not-so-obvious response. Wetlands are rarely recorded under municipal land laws, so nobody knows about them. Planners see only land, not water and greedy builders take over.

It is time we realised that a water body is not an ornamental luxury or a wasted land. A city’s lake is its lifeline. Take Chennai, located at the tail end of all rivers. It has spent a good part of the past two decades squabbling over rights to the Cauvery water, fighting with farmers over withdrawal of water from Veeranamlake and also depleting groundwater aquifers around the city to quench its own thirst.

Today it has two choices: desalinate seawater at a price difficult to recover from its citizens or harvest every drop of rain and hold it in lakes, ponds and underground tanks for use in the dry period. 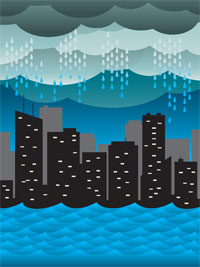 It was also in this city that its then and current chief minister, J Jayalalithaa, had launched an aggressive rainwater harvesting drive. In 2001, it introduced bylaws that made rainwater harvesting structures mandatory in all multi-storey buildings. In 2003, it extended this provision to all buildings and then went about monitoring compliance. All this meant the people understood the value of rainwater. A study by Stanford University on the impact of the initiative found that where without any intervention only 9 per cent of the rainwater went back to the aquifer, with rainwater harvesting it could go up to 30 per cent. This showed up in the bottom line. In the worst months of drought of mid-2000, groundwater was available in many household wells and the tanker market was reduced to a third.

This result was even without optimising on the big potential of rainwater harvesting offered by lakes and ponds that act as sponges. Water experts record over 1,500 water bodies in the city and its vicinity. These are the real opportunity to secure water future. Unfortunately, in the next 10 years, government’s focus moved from the millions of little water collectors to implementing the one big solution of making seawater potable. It has set up two plants of 100 million litres per day, but it is struggling to pay for this water, which costs Rs 50-60 per kilolitre. As electricity costs go up, so does the cost of desalination. Chennai water utility MetroWater, till recently the country’s only water agency with balanced books, is now finding itself in the red because of its expensive hardware for supply.

So Chennai needs to do what all cities must—undertake a detailed survey of the wetlands and then bring every water body and its catchment under legal protection. The Wetlands Conservation and Management Rules issued by the Union Ministry of Environment and Forests and Climate Change are toothless and meaningless. What is needed is to ensure that city development rules include a comprehensive list of water bodies and their catchment. Any change of this land use should not be permitted. Even this will not be enough unless the city values the water this land gives.

The Central government should provide funds for water supply to only those cities that have brought their own water sources under protection. The cities must show they have optimised on local water potential before claiming access to water from far away sources. This will reduce the cost of supply. The city can invest the saved money in treating sewage, which pollutes the lakes and ponds in the first place. It is this vicious cycle that needs to be broken.

The one water cycle cities need to ensure runs smoothly is where water turned into waste because of human use is converted back into water fit for human use.