The deficient design of India's streets

The designing of Indian roads, from carriageways to sidewalks, leaves much to be desired

This blog is the second of a three-part series. Read the first part here.

Two of the top five most congested cities in the world are in India. Mumbai, in fact, has the worst traffic flow in the world. Delhi is marginally better. An average commute during peak hours in Mumbai takes 65 per cent more time while it takes 58 per cent longer in Delhi.

Delhi has 1,749 kilometres (km) of road length per hundred square km, which is one of the highest road densities in India. This gives the city another ‘gift’. The number of vehicles in Delhi comes out to be more than one crore. A high road density has been accompanied by a high number of people owning a vehicle in Delhi. This has happened as the street design has itself favoured personal vehicles at the expense of non-motorised and pedestrian commuters.

This raises the question of equity. We need to ask by what logic is an overwhelming majority of the street space being dedicated to 15 per cent of the traffic.

Why do we still keep the sidewalk width to a miserable bare minimum along with no dedicated space for bicycles while private transport is given a free reign to run havoc?

A lesser discussed issue in street design is that the streets ‘need to be useful’. If one happens to zoom in on the Delhi street grid map, one might notice that due to the unplanned, ad-hoc nature of planning, Delhi street grids do not align from one neighbourhood to the other, often ending in dead-ends or T junctions, which increases the destination-origin distance.

A study indicates that people often prefer ways with less amount of turns. A longer but less complicated way to the destination may be preferred by a commuter to a shorter but more complicated way. The non-alignment of streets thus makes people take the longer way, reducing the usefulness of neighbourhood streets.

This is further combined with the land zoning in the cities where the everyday commercial activities are segregated and pushed away from walkable distances, further cutting down the usefulness of the streets.

The planning needs to not just ensure a hassle-free non-motorised commute but also question the need for the commute in itself by ensuring everyday commercial and leisure activity spaces to be located within walkable distances. 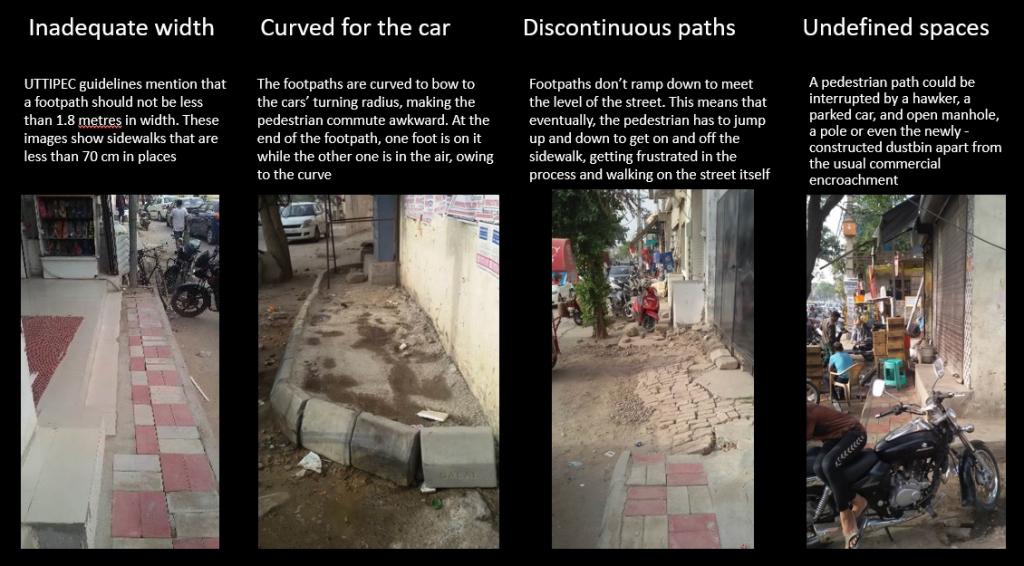 Diving further into the design issues, the height of the footpath is illogical in most places. Kerbstones are easily 30-45 centimetres high. Footpaths of this height are perhaps the biggest reason behind Delhi’s ‘A city for able-bodied persons’ image. It is a city that is not meant to be traversed by an old person, a woman in a saree or a person on a wheelchair.

Is 30 cm to 40 cm height appropriate? Let us look at it in comparison to the height of a staircase in a public space which is kept up to 15 cm. This height is kept to ensure public convenience. The footpath height often exceeds 15 cm by twice or even three times.

The other problem arises as the cars, street vendors, rickshaws, parked vehicles, two wheelers, cycles and pedestrians are left jostling for the same space. A pedestrian path could be interrupted by a hawker, a parked car, and open manhole, a pole or even the newly-constructed dustbin.

Footpaths are designed as an afterthought to motorised vehicles. The footpaths, if they exist, are interrupted in front of a gate so that the car has a convenient passage to the property, bringing again into focus, the ‘gaps between cars’ mentality of the designers.

Moreover, the footpaths are actually curved to the cars’ turning radius, at the same time making the pedestrian commute even more awkward as at the end of the footpath. One foot is on the footpath while the other one is in the air, owing to the curve.

Footpaths do not ramp down to meet the level of the street either. This means that eventually, the pedestrian will be jumping up and down to get on and off the sidewalk, get frustrated and walk on the street itself, endangering his or her life by jostling for space with oncoming traffic.

Has there been an attempt to rectify these problems? The Unified Traffic and Transportation Infrastructure (Planning and Engineering) Centre (UTTIPEC), set up by the Delhi Development Authority, came up with its ‘Street Design Guidelines’ in 2011.

The guidelines detail the street design for various contexts and widths. However, clearly, these guidelines are not being implemented even in the new projects.

A recent welcome step has been the Supreme Court’s ruling on September 2 on parking policy by reaffirming the right of pedestrians to the footpath. This needs to be combined with genuine on-ground action by the law-enforcers by penalising the encroachers.

The street guidelines need to be enforced without exceptions and the planners and designers need to set their priorities right by reaffirming the right of the citizen to walk and commute without adding onto the carbon emissions.

The next in this series will talk about how the experience of the pedestrian is another aspect which needs to be looked at. A street might be useful, wide enough and yet, subtle or sometimes brave decisions are needed to make the streets and neighbourhoods much more attractive for the non-motorised commuter.

Sugeet Grover is a Programme Officer in the Sustainable Buildings and Habitat Programme at the Centre for Science and Environment, New Delhi