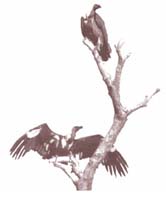 India has been experiencing a massive decline in the population of vultures since the last decade. We might have lost over 100,000 birds from several of their strongholds in urban and rural areas as well as Protected Areas (pas) and forests. Of the eight species of vultures occurring in the subcontinent, the white-backed vulture (Pseudogyps bengalensis) and the griffons (Gyps fulvus) bore the brunt of the tragedy. Other vultures also suffered proportionately.

This decline in vultures started around 1990, became more visible by 1995 and turned serious after 1997. It is more or less uniform leaving very small vulture populations in some pas, forests and villages. In Guntur and Prakasham, the coastal districts of Andhra Pradesh, vultures were exterminated by 1990 due to the insatiable appetite of the "Bandas" (Bandolu tribe) for vulture meat. In the Towers of Silence for the Parsis in Mumbai, vultures were not seen for the past three years. As a result, the Zoroastrian community has not been able to perform the last rites of the dead to their satisfaction as vultures were not available to accept their last religious offering. Vultures maintain the health of ecosystems and save our living planet, consuming diseased carcasses and corpses.

In the Delhi-Agra-Bharatpur triangle and neighbouring localities, an area of more than 10,000 km, vulture populations slid from approximately 20,000 birds in 1990 to about 150 in 1999.

The scientists of Bombay Natural History Society claimed the populations of both the whitebacked vulture and long-billed griffons have declined by 90 per cent in their strongholds all over India and the death of these birds is due to a viral disease. However, it is difficult to tell a percentage of decline without mentioning the population of vultures that existed in a larger area. A total of 16,912 vultures were, reportedly, observed by 2,000 people during January and early February 2000 in a large area covering Rajasthan and parts of Punjab, Haryana, Delhi, Uttar Pradesh, Madhya Pradesh, Gujarat and Maharashtra.

The advocates of the infectious disease hypothesis for the dwindling number of vultures said that the drooping head or neck syndrome as observed in the white-backed vulture and the long-billed griffon (Gyps indicus) occurring in Rajasthan in India, Nepal and Pakistan revealed that this disease that killed 90 per cent of the vultures in India, is still prevalent in south Asia and it originated from southeast Asia.

Vultures were not common in countries such as Thailand, Vietnam, Cambodia, Malaysia and Singapore and modernisation as well as human persecution caused the vulture decline in southeast Asia. The birds have almost disappeared from Nepal and Bangladesh by 1990 as in India because of paucity of carcasses, an unintended result of globalisation.

A drooping head may not be a symptom of a disease because it is a normal resting posture of the white-backed vulture and the griffons. In fact, more than a viral disease, poisoning is a major factor for vulture decline in India. Dr Ohad Hatzofe, a vulture expert from Israel, corroborates this saying a disease factor is a remote possibility in vulture deaths while poisoning (intentional and accidental) is a major factor for the decline.

Though no sick or dying vulture was investigated for a disease so far, a report of Bombay Natural History Society mentioned that Dr Andrew Cunningham has identified adeno virus as the cause of vulture mortality in India. The pathogen causing vulture mortality has been identified as Birna virus. However, observing a disease germ in the tissues of dead vultures in not sufficient to prove a disease factor hypothesis for the birds' decline as vultures feed on diseased carcasses and corpses regularly. These disease germs may be dormant in healthy birds.

Besides, the disease hypothesis cannot explain the mortality of the white-backed vulture alone on a larger scale or the mortality of kites, crows and birds feeding on carcasses along with vultures.

Vultures were harassed, trapped and killed by people because of dislike, hatred, myths and fear of the bird as they look repulsive, feed on carcasses and corpses, are capable of attacking, killing and lifting livestock and human babies and became a serious aviation hazard. Vultures were also killed due to ignorance of their role in nature as ultimate scavengers and their essential role in ecosystems. Abject poverty of some communities, such as Nagas, Mishis, Mizos and others in Northeast Indian states, Bandas in Andhra Pradesh and some tribal people in Madhya Pradesh, Bypane near Mumbai, Vishwaneedam near Bangalore and Gir Forest in Gujarat compelled them to feed on their eggs, chicks and sometimes also the adult birds.

Due to unplanned urbanisation, primitive livestock slaughtering practices and inefficient carcass disposal system, vulture population rose from an optimum level before 1970 to such unbelievable proportions as to become a severe threat to aviation causing costly collisions. Thereafter, vultures were harassed, killed, food was denied to them by banning carcass dumping and illegal slaughtering by sanitising regular carcass dumps and by bird-proofing primitive slaughter houses or upgrading them to abattoirs.

A number of vultures died and the majority of populations moved to pas, forests and villages all over India from 1989. In their new found homes, vultures succumbed to rampant poisoining of wild and domestic animals by poachers and villagers.

Small vulture populations, much below optimum levels, occur in pas, forests and villages but none are observed in the majority of the cities, towns and villages with aerodromes.

Vultures were trapped because their meat is used in traditional medicine and bones by priests in Ladakh during prayers. They were traded as zoo exhibits, museum specimen, experimental birds and pets and to circus companies.

Even though there are several probable causes for the vulture mortality, deliberate and incidental poisoning appears to be the major one. But the poison used is not known in most of the cases. Poachers poison wild animals such as tiger, elephant, rhinocerous, deer, antelope or bear to take away the tradable parts such as hide, tusk, antler, horn and bile. It appears that villagers living around pas in Uttar Pradesh, Madhya Pradesh, Rajasthan and Himachal Pradesh are commissioned to kill carnivores by poisoning.

Unlike gunshots, the advantages of killing wild animals by poisoning are that the whole activity is safe, silent and secretive without attracting guards of pas or rangers of forests. The felts or skin of the animals also do not bear bullet marks thereby reducing their market value.

Poison-baited carcasses laid in the Indian districts bordering Pakistan and Nepal could be a reason for the mortality of vultures in Pakistan and Nepal. To prove that a disease caused the colossal vulture mortality in India, Pakistan or Nepal one has to eliminate the poisoning factor. This is difficult in the light of hundreds of poisoning cases already known to us.

There may be a significant relation between poisoning of wild animals and the nation-wide vulture mortality during 1989-99. One can easily find out that large number of wild animals were poached or killed mainly by poisoning all over India during this period. Vultures were very common in Anamalais. The villagers used to lay poison-baited carcasses to kill cattle-marauding carnivores there. In the process, all vultures in the area were wiped out. Poisoning by villagers and poachers may explain in part the disappearance of vultures in several states in India.

Cattle-lifters poison livestock so that they can easily take away the hide and bones. In India, the Hindus do not slaughter cows for religious reasons. Hence, cattle-lifters poison cows. There were reported instances of village cows dying after being fed on zinc phosphide, a rodenticide, by hide collectors at Bharatpur. Depending upon the quality and quantity of poison used in these cases, large number of vultures could die feeding on a single such carcass.

While cattle-lifters poisoned livestock to steal hide and bones and villagers laid poison-baited carcasses to discourage livestock-marauding carnivores, a huge number of vultures also died feeding on the poisoned carcasses. A large number of tigers, leopards, wolves, jackals and other animals killed between 1989 and 1999 by poisoning is an indicator of the colossal mortality of vultures. Lead poisoning caused from gun shots used by poachers also killed vultures.

Lack of concern and a sense of belonging to our planet are the main causes of such callous indifference to the plight of the bird. It prevented us from making laws to protect all species of vultures, the most important scavengers functionally needed for the health of the ecosystem. Only the Bearded Vulture (Gypatetus barbatus) is protected by the law in India.

It will be unscientific to say that no vulture died of any disease. To identify the actual disease germ, which might have caused mortality in vultures, describing and confirming the symptoms of the disease, developing a vaccine and innoculating it in the wild population will take prolonged time and effort.

Hence, some emergency conservation measures are required to protect the remaining population. As the paucity of carcasses and fear of trapping and killing caused the disappearance of vultures and human persecution is a known cause for their decline, providing food and safety while feeding, is the best emergency measure to save vultures. Setting up vulture feeding stations through provision of poison-free food, clean water, bone chips and perches within an open-roofed wire-mesh enclosure for safety and freedom is the best conservation tool to be implemented.