By-laws for solid waste management in Delhi were finally notified. What next?

The by-laws have remarkable provisions, which if implemented properly, should lead to transformational changes 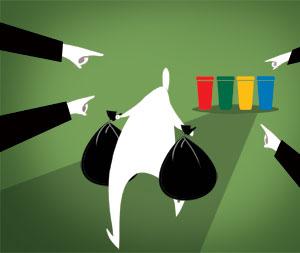 The solid Waste Management By-Laws 2018 for the National Capital Territory of Delhi (NCT) were notified by the Lieutenant Governor on January 15. For the first time, the by-laws have been framed under Section 5 of the Environment (Protection) Act, 1986, and not under the state municipal laws. All the five municipal corporations in NCT are now bound to enforce the by-laws in their areas of jurisdiction.

Garbage is visible everywhere in NCT and it infiltrates our bodies and ecosystems. Arpit Bhargawa, an advocate of the Delhi High Court and one of the petitioners, had a harrowing experience with the filth in the city. Not only did he suffer from dengue, but also met people who had lost their children to the disease. Acting Chief Justice of the Delhi High Court, Gita Mittal, took a personal interest in the matter and appointed a 16-member committee to resolve Delhi’s solid waste woes. The committee submitted its long-term action plan and also prepared the draft by-laws.

The by-laws have remarkable provisions, which if implemented properly, should lead to transformational changes. The by-laws emphasise the generator’s responsibility to segregate solid waste at source. Every waste generator has to segregate waste into three streams: biodegradable (wet waste), non-biodegradable (dry waste) and domestic hazardous waste. These streams of waste have to be stored in colour-coded bins—green, blue and black, meant for wet, dry and domestic hazardous waste respectively. Municipal corporations have to ensure collection and transportation of segregated solid waste, including waste from slum and informal settlements, by integrating the informal door-to-door collection system with the municipality. Time slots for waste collection for each area must be set and published on municipal websites. The corporations must optimise the use of biodegradable waste and ensure that it is treated in-situ—in fruit and vegetable markets, residential areas and by resident welfare associations. The corporations must ensure that horticultural, park and garden waste is processed in parks and gardens itself, as far as possible.

To minimise transportation cost and environmental impacts, the by-laws state that preference must be given to decentralised processing mechanisms such as biomethanation and composting. For waste-to-energy plants that incinerate directly, absolute segregation will be mandatory and would be a part of the terms and conditions of the relevant contracts. All inert and residual waste must be disposed in a manner prescribed under the Solid Waste Management Rules, 2016.

Corporations must fix a user fee for services like garbage collection, transportation and disposal from waste generators. A mechanism must be evolved for the collection of user charges. The by-laws also state that a penalty will be imposed for non-segregation, open burning of solid waste and dumping of solid waste in vacant plots. In the case of events, corporations have been mandated to take a deposit fee from the organisers. The money will be refunded only if the organisers ensure that any waste generated has been collected and transported to a designated place.

The by-laws provide legal teeth to the regulators. Municipal corporations must now ensure that the details of the by-laws are widely disseminated to educate the public about their role and responsibility. At the same time, corporations must create efficient systems to support end-to-end segregation, processing and appropriate disposal of solid waste. Only then can we change the filthy environs of Delhi. Otherwise, it would just be another case of a good policy wasted due to inaction.

(This article was first published in the 16-28 February issue of Down To Earth under the headline 'Broom sticks').