Our history makes it evident that the Indian plastics industry made a vigorous beginning in 1957. But, it took more than 30 years for it to pervade Indian lifestyles.

In 1979, “the market for plastics” was just being seeded by the state-owned Indian Petro-Chemicals, and it was only in 1994 that plastic soft drink bottles became a visible source of annoyance.

In the wake of the plague scare in Surat in 1994, people in other cities decried the state of public sanitation and urged regulatory bodies to ban the production, distribution and use of plastic bags.

Since then plastic waste has become a mainstay for the humblest waste pickers, especially women and children who try to scrape together livelihoods through the most vulnerable ways in this domain.

Moving forward, the Central Pollution Control Board (CPCB) in 2015 estimated that average plastic waste generation in the country is around 6.92 per cent of municipal solid waste (MSW).

Growth of plastic consumption in India between 2013 and 2018 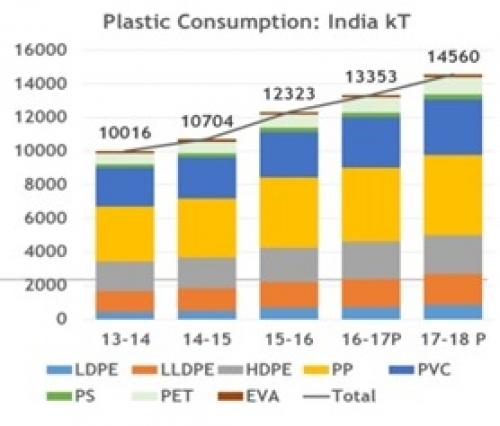 Delhi, Chennai, Kolkata, Mumbai, Bengaluru, Ahmedabad and Hyderabad are amongst the top generators, while Gangtok, Panjim, Daman, Dwarka and Kavaratti are lowest on the index.

Of this, around 15,600 TPD or 60 per cent gets recycled and more than 9,400 tonnes ends up in the seas, oceans or gets piled up on lands devoid of source segregation.

Growth, production and per capita consumption

The massive generation of plastic waste in India is due to rapid urbanization, spread of retail chains, plastic packaging from grocery to food and vegetable products, to cosmetics and consumer items.

India’s plastic consumption at 11 kilogrammes is still only a tenth of the US and less than a third of China’s, according to PlastIndia 2015. But, the projected high growth rates of GDP and continuing rapid urbanisation suggest that India’s trajectory of plastic consumption and plastic waste is likely to increase.

The plastic processing industry in 2018 estimated that polymer consumption from 2017 to 2022 is likely to grow at 10.4 per cent, nearly half of which is single-use plastic.

The CPCB’s Annual Report (2018) observed that data on the status of implementation of Plastic Waste Management Rules, 2016, were submitted by only 13 State Pollution Control Boards (SPCBs)/Pollution Control Committees. The report deduced that total plastic waste generated was 660,787.85 tonnes per annum. The remaining 21 SPCBs/Union territories have till date not submitted information on their implementation status of the policy.

India stands among the few other countries like France, Mongolia and several African countries that have initiated total or partial national-level bans on plastics in their jurisdictions, according to the United Nations Environment Programme (UNEP) report of 2018.

On World Environment Day in 2018, Prime Minister Narendra Modi vowed to phase out single-use plastics by 2022, which gave a much-needed impetus to bring this change.

Assessment of Plastic Waste in MSW for 13 States of India 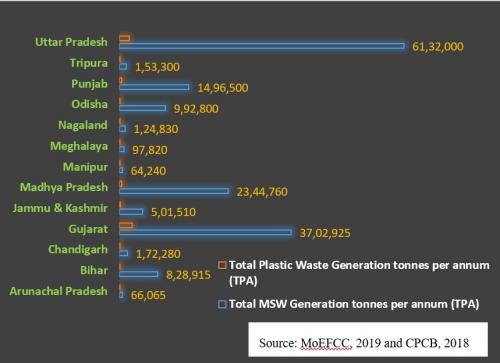 A world of greater possibilities has now opened up to initiate appropriate and concrete actions to build up the necessary institutions and systems ideally before oceans turn, irreversibly and for centuries to come, into a thin soup of plastic.

However, there is no one single masterstroke to counter the challenges witnessed by the staggering plastic waste management in the country. So, the time is now to formulate robust and inclusive National Action Plans, and while doing so, the country will establish greater transparency to combat plastic jeopardy in a more sustainable and holistic way.